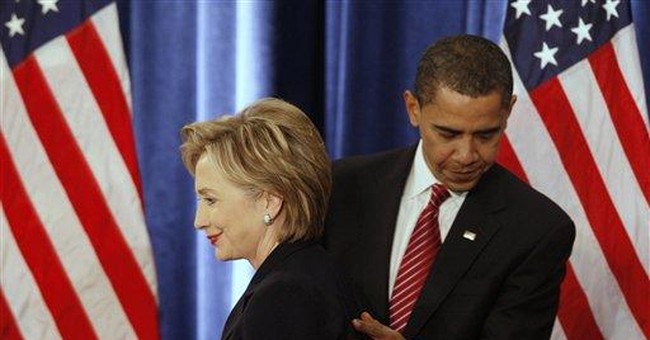 To understand the central dynamic behind Obama's unorthodox selection of Hillary Clinton as his secretary of state, one must look abroad to parliamentary political systems where the most powerful opposition figure routinely becomes prime minister when his party wins a majority, while the second most potent politician is usually named the foreign minister.

That's the model. Obama's selection of Hillary is by no means the act of a president tapping his favorite to hold the top portfolio in his administration. Instead, it is the appointment by the leader of the majority party -- trying to hold it together behind his leadership -- offering due deference to the woman he narrowly defeated.

Barack Obama realizes that it is Hillary's and Bill's Democratic Party he now leads. He is the new guy in town. So he has paid obeisance to the Clintons' power by naming their loyalists to his Cabinet and their pretender to the presidency to head the State Department.

The problem is that he cannot expect Hillary to offer the proper quotient of gratitude for an appointment that she likely feels she has at least earned and perhaps compelled by her success in winning votes in her party's primaries. She serves not as an adviser, but as a principal, taking office as of right rather than through the sufferance of her nominal boss.

By way of his appointment of Hillary, President-elect Obama has set the stage for a civil war within his administration. The rivalry between the State Department and the National Security Council (NSC) has always been sharp. NSC Adviser Henry Kissinger dueled with Secretary of State Bill Rogers. NSC Adviser Zbigniew Brzezinski battled Secretary of State Cyrus Vance. The Bush administration's first term was animated by the rivalry between Secretary of State Colin Powell and Donald Rumsfeld at the Pentagon. The conflicts between these two powerful poles in the foreign policy universe have been epic. But now the push-pull between the White House and the State Department is likely to become particularly inflamed.

As long as Obama is riding high, everything will be fine. But should his ratings falter, can anyone doubt that it will be Hillary Clinton to whom worried Democrats will turn to offer an alternative in 2012?

Lyndon Johnson inherited a Cabinet with his rival, Bobby Kennedy, and got rid of him as soon as he decently could. Obama has imported his rival.

But the designation of Hillary is only one part of a Cabinet Obama has assembled without any reference to the loyalty of its members to his presidency. I doubt that he carried his own Cabinet in the primaries against Hillary. He has appointed the identical government that one would have expected under a President Hillary Clinton. The only difference is that he is president.

What does this administration say about Obama? Does it, at last, offer a real clue as to who he truly is?

I believe that it reveals that he is a man who never really expected to be president and now is rather awed by what he has achieved. Here's a guy who was on a very successful book tour in late 2006 before his success at signings went to his head. As long as he seemed able to draw and dazzle crowds, he figured, why not run for president? Knowing he'd probably lose, he saw no harm in trying. Then, as his candidacy developed more momentum with each speech, he moved closer and closer to the White House. But, on arrival, he doesn't know quite what to do with the power. So he is assembling around him the permanent government of the Democratic Party in the hopes that they will know what to do.

Hillary might do well as secretary of state. She has the toughness and energy that the job requires and the single-minded dedication to achieving a goal that it demands. At last, she need not adopt a phony pose. She has a real job that she has earned on her own. She can show her real strengths of prioritization, skilled advocacy and determination.

But her appointment, and that of her cronies to most of the other top positions in the Obama government, makes it very likely that Obama will be unable to impress his own mark on his presidency. It is not just that he has appointed a "team of rivals." It is that he has hired the coach, quarterback and stars of the rival team and now hopes that they will listen to him rather than to one another.