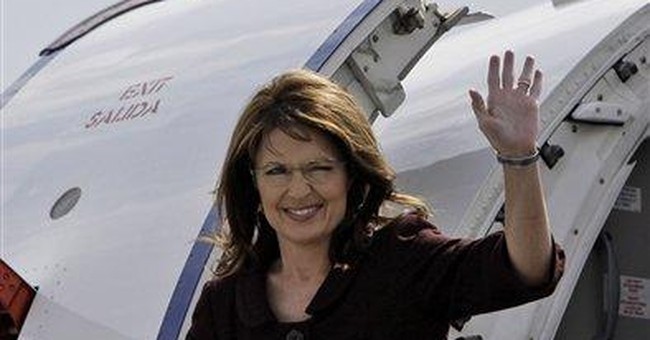 Last night was a big, big win for Sarah Palin.

She showed originality, charisma and sass - a style that is refreshing and different in our politics. She didn't just win the vice-presidential debate, she showed that she belongs with Ronald Reagan and Bill Clinton as among the best communicators of our modern political times.

Her sallies against big government were brilliantly conceived and well executed. Her line that she didn't understand how Washington worked because politicians vote for something right after they vote against it, for example, was just wonderful.

Another classic came when she bit back at moderator Gwen Ifill and opponent Joe Biden and said she'd answer the questions as she wanted to, not necessarily as they wanted her to do.

Gone, long gone, are the worries about how good or well-prepared Sarah Palin is.

Most important, she showed how John McCain would bring change to Washington. Would that McCain could articulate his own sense of change as well as his running mate did!

For his part, Biden sounded like the warmed-over has-been that he is - he seemed to be on downers. Where she was thrilling and exciting, he was hypnotically boring. He seemed like more of the same, while she seemed like a breath of fresh air.

Without trepidation, she tossed aside the Bush years and spoke of the "blunders" in Iraq. She was able to skewer Wall Street and show Republican opposition to the greed there.

She even handled Biden very well on his turf, foreign policy - meeting him head-to-head on every issue, and winning.

Everyone realizes that Palin has been in this field for only five weeks; her ability, nonetheless, to prevail against a veteran like Biden is a testament to her intellect and skill.

That smiling face, those novel phrases, that informal style - it was all a pleasure and a refreshing change.

And she got her ticket off on the right foot for October - making the tax issue stick and zinging Barack Obama's economic programs and his big-spending plans.

The Alaska governor did a wonderful job of displaying her experience and justifying her candidacy in terms of her expertise on energy issues. It's now far harder to dismiss her as an unqualified flake.

More, she connected in a way that few politicians do: She speaks for us.

Palin did a lot to help McCain last night - illustrated the best about him. But she did more to help herself - vaulting to a leading role among women in American politics. Her authenticity and unique style will be with us for years to come.

Last night's Palin victory will have an immediate impact on the presidential race - arresting McCain's fall and slowing Obama's surge.

The only question is whether it will be enough to reverse Obama's gains of the past week. It might go a long way in that direction.