Why She Really Scares Them 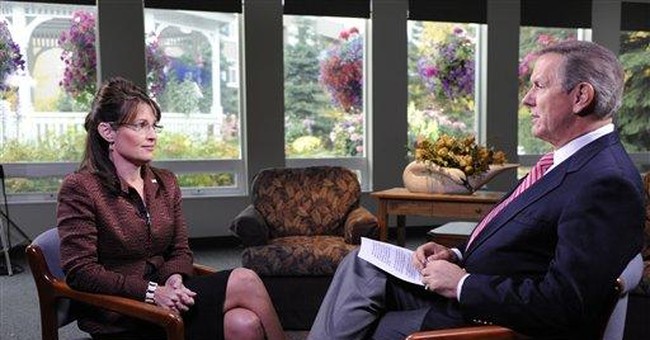 For two weeks, Democrats and their media allies have leveled scorching fire at Sarah Palin. It's not having much effect, but they keep at it anyway.

Why do Democrats feel so threatened? They've even stopped attacking McCain and President Bush to launch a vicious and sexist barrage at her that would normally make a feminist angry and a Democrat blush.

Basically, it's this: John McCain only endangers Democratic chances of victory this November, but Sarah Palin is an existential threat to the Democratic Party.

She threatens a core element of the party's base - women

When an African-American like Clarence Thomas, Colin Powell or Condi Rice rises to prominence as a Republican, he or she endangers the Democratic coalition. So would a Republican labor leader.

And so, above all, does the woman Republican running for vice president.

Democrats can't stomach seeing the feminist movement's impetus for greater female political participation and empowerment "hijacked" by a pro-life woman who espouses traditional values. They must obliterate her, lest her popularity eat away at their party's core.

So the Democrats are hysterical in their attacks on her. South Carolina's Democratic Party chairwoman, Carol Fowler (wife of a national party chairman), said that the only qualification Palin had for vice president was that she hadn't had an abortion. Tabloids are digging up dirt on Palin's children. And liberal bloggers have suggested that Palin would neglect her children if she were elected (while the Democratic candidate has young children at home, too).

That liberals would resort to such blatant sexism shows their desperation.

But the Fox News poll of Sept. 8-9 indicates a deeper reality of Palin's popularity. On the question of which of the four candidates best understands what day-to-day life is like in America, Palin finished first, with 33 percent. (Obama drew 32 percent, McCain 17 percent and Biden 10 percent.)

She's not popular because she's a radical feminist or pro-choice advocate. It's because she understands what it's like to be a woman in 21st century America.

She's never ascended to the elite, so she doesn't need to stoop to conquer as most well-heeled feminist leaders must. She lives far from the plastic pseudoreality where a fossilized ideology substitutes for human compassion and empathy. As such, she rises above the slogans of both the left and the right and proposes to bring to Washington a dose of reality - a taste of real life.

She may become the first woman in national office - yet the Democrats, feminists and liberals can't control her, and that burns them up.

Elections come and go, but Palin is a far more fundamental threat to the Democratic Party. And that's why they fear her so.