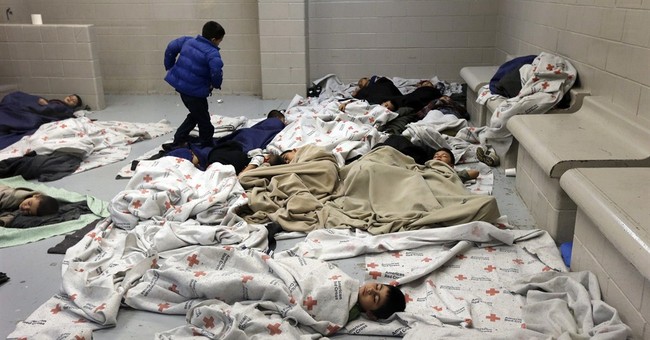 About a dozen news cycles ago, Americans seemed horrified by the border crisis – horrified by the tens of thousands of illegal aliens, many of them minors, crashing across the southern border.

These aliens were heading not into no man’s land and then deportation, but straight into the United States of Obamaland, an awaiting federal superstructure where travel, housing, health care, education, legal aid and even “amnesty” were promised for all, probably forever, and gratis. It’s hard not to see this ongoing episode as a federally organized invasion of the nation paid for by the U.S. taxpayer.

And now? The focus has weakened since the feds and their federally financed “religious charities” dispersed many thousands of border-crashers across the country. The “national crisis” story has fractured into innumerable local stories about classroom chaos as teachers grapple with as many as 20 Spanish dialects per school, or outbreaks of dangerous “mystery” viruses (common to Central America, but don’t mention it). The national crisis, however, still exists. Our national border is no barrier between the United States and Mexico.

This is not solely due to having insufficient numbers of border agents and other defenders. More would help, of course, and I believe the military should be deployed along our southern border. The main problem, though, is that deep in the minds of our elected officials and entrenched bureaucracies, the concept of a border doesn’t exist.

A crisis of ideology is the real crisis, not the illegal masses, not even the transnational drug cartels and terrorists among them. All such threats are beatable or deportable, and thus surmountable – if, that is, there was sufficient political will to defend the border that defines the nation. But, the magnificent exception of Sen. Jeff Sessions, R-Ala., and a few other stalwarts aside, there isn’t such will.

Our political elites display the globalist’s contempt for the national border – for boundaries in general – and that’s what puts the American people in peril. It is this same zealotry that sees no reason to prevent travelers from Ebola-stricken countries from deplaning into the nation’s airports and cities – and no reason not to deploy U.S. troops on possible suicide missions to Ebola hot spots.

Such attitudes, though, are also reflected in the wider culture. In fact, one outlook can’t exist without the other. Americans would never tolerate, let alone elect, officials who didn’t defend our borders unless they, too, believed in, or had been conditioned to acquiesce to highly complementary ideologies.

My first book, The Death of the Grown-Up, could easily be titled “The End of Boundaries” due to its examination of social changes resulting from the disappearance of the moral and behavioral boundaries that once offered a common road map for living. Whether all people followed this road map, it was there and it was familiar. It didn’t eliminate evil or vice, of course, but it kept it at an ideal distance on the other side of commonly understood lines of demarcation.

By now, such lines have all but disappeared. Without the boundaries that once, for example, defined the domain of traditional childhood, or that once set the patterns of average adulthood, we find ourselves wandering off the charts.

Without boundaries, anything, practically, goes. Profanity is as common in the boardroom as it is in the locker room. Sex, as in male or female, is no limit to sexual identity. Tender age is no bar to sexualization. Forbearance and restraint vanish in the rush of instant gratification. Moral boundaries shift, making one man’s terrorist indeed another man’s freedom fighter.

“Appropriate” is a lost continent. Closets are open. Taboo is taboo. Public life and private life are indistinguishable. Homes are as permeable to media coming in as lives are open to social media going out. It is the convention to observe no convention. In sum, where there are no lines, there is increasingly no will to draw the line.

That goes for the national border as well. After all, how can a society that can’t draw the line turn out leaders who enforce the border? Open borders and federally welcomed invaders keep some of us awake at night, but I hear no widespread clamor for basic national protection. Maybe we’ve just lost the instinct. Look how we meet the current outbreak of jihad – costly, ineffective bombing campaigns thousands of miles away while our own border remains perilously porous!

“If you really want to protect Americans from ISIS, you secure the southern border. It’s that simple,” Rep. Duncan Hunter, R-Calif., recently and so very refreshingly told Fox News’ Greta Van Susteren. Hunter continued: “ISIS doesn’t have a navy, they don’t have an air force, they don’t have nuclear weapons. The only way that ISIS is going to harm Americans is by coming in through the southern border – which they already have.”

That’s defining the threat and offering the patriotic solution both: Defend the U.S. border.