A Sudden Turn Against Israel 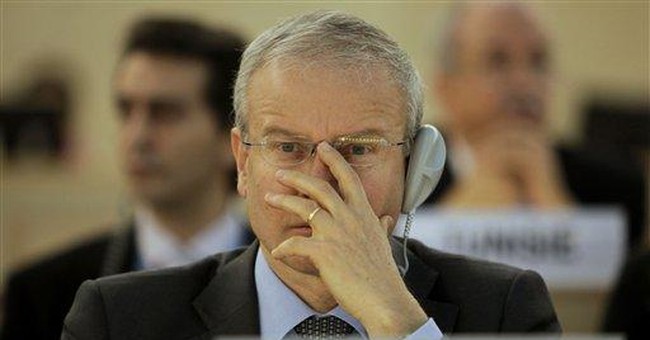 It's mind-boggling how quickly the Jerusalem housing project realigned the stars over Israel to shine down on a new, official vision of the Jewish state as a drag on our interests in the world -- endangering the lives of our troops.

That was the message Vice President Biden delivered in Israel this month: "What you're doing here undermines the security of our troops ..." according to Israeli media. The White House denied it.

That was the feeling the president conveyed in treating visiting Israeli president Benjamin Netanyahu like an international leper this week (no pictures, no press, no statements, no nothing).

And very sensationally, that was the narrative CENTCOM Commander Gen. David Petraeus put in writing to the U.S. Senate (sending hero-worshipping conservatives into denial) as noted in last week's column. Disregarding the impetus of 14 centuries of Muslims' doctrinally driven aggression on non-Muslims, Petraeus advanced a line that echoed the Arab League's: namely, that "Arab anger over the Palestinian question" drives violence throughout the CENTCOM region, which includes Iraq and Afghanistan, and enhances the powers of Iran and al-Qaida.

One prominent conservative commentator who strongly supported the Bush-Petraeus policy in Iraq expressed his shock to me in an e-mail: "I would think that Jewish leaders would be appalled by Petraeus' statement ('The Jews are protecting their property with the blood from the bodies of our dead young men!!!') It is about 95 percent the way to the 'blood libel' that, I hate to admit, Christians used in the Middle Ages against the Jewish people."

And it energized the Israel bashers, from Stephen Walt, who quoted Petraeus in a Washington Post op-ed, to Robert Malley, erstwhile Middle East adviser to candidate Obama -- let go for his contact with Hamas, who bluntly underscored the same line at a conference: "Israeli actions are threatening U.S. actions and military presence in Iraq and Afghanistan."

Meanwhile, Palestinians in Gaza launched about a dozen terror rockets into Israel, drawing zero international comment. Next, Great Britain took the extreme measure of expelling an Israeli diplomat over British passport forgeries used in the alleged Mossad assassination of a Hamas terrorist. Is the international noose around Israel drawing tighter or is the "peace process" just intensifying? When executing terrorists and building apartment houses violates "peace," and launching rockets is part of the "process," it's impossible to tell the difference.

Obviously, there is more to this than apartment houses. In his book "The Legacy of Islamic Antisemitism," Andrew Bostom explains the doctrinal basis not just of Islamic antisemitism -- an eternal driver of the jihad on Israel -- but also of the concept that there exists a kind of eternal right of return of Muslims to any former Muslim conquest. "All of historical Palestine," he writes, "whose pre-Islamic inhabitants, Jews, Samaritans and Christians were conquered by jihad in the fourth decade of the seventh century, is considered 'fay territory.'" In other words, having once been conquered by Islam, such land is considered by Muslims to be "a permanent part of the Dar al Islam, where Islamic law must forever prevail." According to this thinking, Israel, governed by "usurper" infidel Jews who are no longer a subjugated dhimmi people, "must be destroyed in a collective jihad by the entire Muslim community."

Hard to ignore such a potent source of aggrieved aggression. But we do, and to the point of denying its very existence. And then what? Oskar Freysinger of the Swiss People's Party, famous for leading the campaign to ban minaret construction in Switzerland, when explaining why his party, known for its anti-Islamization policies, had always supported Israel, once told me: "We are well aware that if Israel disappears, we lose a vanguard. They (the Israelis) are fighting our fight, in fact. As long as the Muslims are concentrated on Israel, it's not so hard for us. But as soon as Israel will have disappeared, they will come to get the other part" -- namely, Europe.

What Freysinger sees better than most (including Israelis) is the apocalyptic dimension to global jihad, regardless of the "peace process" and other camouflage. Not only are we witnessing what could be the final stages of jihad on Israel; the United States is now openly supporting the wrong side.