Questions No One Wants to Ask Gen. McChrystal 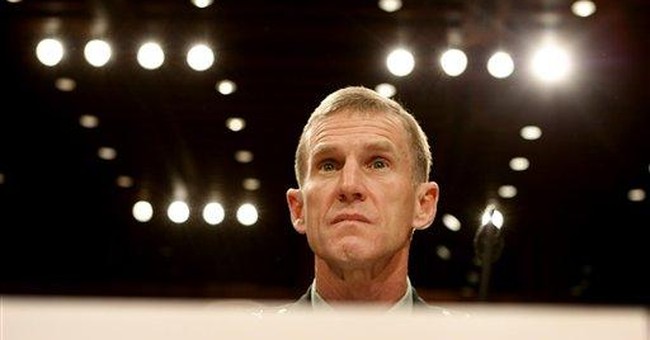 Gen. Stanley McChrystal's long-awaited testimony before Congress on the Afghanistan "surge" was, according to one account, "uneventful." The general himself, another story noted, was "a study in circumspection." And questioning from lawmakers was, said a third, "gentle."

That's a nice word for it. "Ineffectual" is more like it. Throw in "callous," too, given House members' obligations to constituents in the war zone, operating under what are surely the most restrictive rules of engagement (ROE) in U.S. history.

But not a single lawmaker appears to have ventured one question about these dangerously disarming ROEs, which, in Gen. McChrystal's controversial view, are key to the success of his "counterinsurgency" strategy. What kind of a commander puts his forces' lives at increased risk for a historically unsuccessful theory that depends not on winning battles against enemies, but on winning the "trust," or, as we used to say (and as Gen. David Petraeus put it in Iraq), the "hearts and minds" of a primitive people immersed in the anti-Western traditions of Islam?

That would have made a nice ice-breaker of a question for any lawmaker troubled by the Petraeus-McChrystal policy of elevating Afghan "population protection" over U.S. "force protection" to win "the support" of this 99 percent Islamic country, and the rules that American forces must follow to do so. If, that is, there were any lawmakers so troubled.

Things really tightened up back in July, when Gen. McChrystal essentially grounded air support for troops except in dire circumstances. This, in the words of British defense intelligence analyst John McCreary, is "like fighting with a hand behind your back." And with deadly results, such as the September firefight in Ganjgal where three Marines and a Navy Corpsman were killed when, according to McClatchy newspapers' Jonathan S. Landay, repeated requests for support were nixed due to "new rules to avoid civilian casualties."

As the Washington Times recently reported, the McChrystal counterinsurgency rules now include: No night searches. Villagers must be warned prior to searches. Afghan National Army or Afghan Police must accompany U.S. units on searches. Searches must account, according to International Security Assistance Force (ISAF) headquarters, "for the unique cultural sensitivities toward local women." ("Islamic repressiveness" is more accurate, but that's another story.) U.S. soldiers may not fire on the enemy unless the enemy is preparing to fire first. U.S. forces may not engage the enemy if civilians are present. U.S. forces may fire at an enemy caught in the act of placing an IED, but not walking away from an IED area. And on it goes.

Here's another ROE that Gen. McChrystal should have been asked to justify to all Americans who hope to see their loved ones return home in one piece. The London Times recently reported that Marines, about to embark on a dangerous supply mission, were shown a PowerPoint presentation that first illustrated locations of IEDs along the way and then warned the Marines "not to fire indiscriminately even if they were fired on."

Even if they were fired on? Could they fire at all - even "discriminately"? How long does Gen. McChrystal think troops can hold their fire and maintain healthy morale? And how about a progress report on the investigation into that deadly disaster at Ganjgal? Congress wasn't interested in any of these questions.

The Times story went on to note: "The briefing ended with a projected screen of McChrystal's quote: "It's not how many you kill, it's how many you convince."

Another question: How many you convince of what, general? Of the depravity of child marriage? Of the injustice of Sharia laws that subjugate women and non-Muslims? Of the inhumanity of jihad?

Of course not. In an oblique reference that likely took in Islam, Gen. McChrystal told Congress: "I think it's very important that from an overall point of view, we understand how Afghan culture must define itself, and we be limited in our desire to change the fundamentals of it.

Fine. I don't want to change Afghan culture, either. But acknowledging its roots in an ideology that is anti-Western is crucial to devising strategy for the region. That's obvious. But not to any of our leaders.

Final question: Are such leaders, civilian and military, doing their duty when they send the nation to war with a strategy that totally ignores jihad, the war doctrine of the enemy?