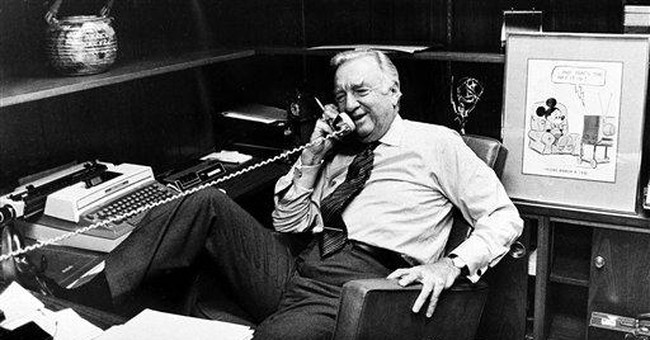 It's time for a post-Cronkite post-mortem, but not on the late "icon" himself -- the "most trusted man in America," the "voice of God," "the gold standard," the "proxy for a nation," or, in plainer English, the lush-lived celebrity "anchor" who died this month at age 92. No, the Cronkite post-mortem that's needed is for the zombies who conjured up the hollow rapture and the living dead who fell for it.

Harsh words? You bet. But I don't know how else to begin to assess a nation that sees fit to celebrate, crown, even worship a man who said his "proudest moment" was when he declared on CBS, having misinterpreted the 1968 Tet offensive as a victory for North Vietnam, that the Vietnam war was unwinnable for the United States. "If I've lost Cronkite, I've lost middle America," almost every Cronkite obituary approvingly quoted President Lyndon B. Johnson as having said in response -- never mind that Cronkite was flat-out wrong in his reporting.

This was the infamous "stalemate" broadcast in which Cronkite editorialized in unprecedented manner: "It is increasingly clear to this reporter that the only rational way out then will be to negotiate, not as victors, but as an honorable people who ... did the best they could." Despite his obit-omnipotence, Cronkite alone wasn't responsible for LBJ's offer again to negotiate with Hanoi, his decision not to run for re-election, the ultimate flagging of America's commitment to South Vietnam, or one million-plus boat people who fled the communist regime, but the famed broadcaster was without doubt a key influence in persuading the nation, particularly its elites, to accept, if not court, American defeat in Vietnam.

So, to use his own words, was Walter Cronkite an honorable journalist who did the best he could?

No. What may -- may -- have resulted from forgivable misimpressions due to the "fog of war" long ago crystallized into obdurate lies. Cronkite never clarified the record, never admitted that the Tet offensive -- the Vietcong's surprise holiday attack on cities across South Vietnam -- resulted in a military and political fiasco for North Vietnam.

This was becoming apparent even before the dust had settled in 1968, as we learn in Peter Braestrup's indispensable "The Big Story", one of the signal historical works of the 20th century, which meticulously analyzes the media's failure to assess Tet correctly as a defeat for North Vietnam. Even Leftist journalist Frances Fitzgerald in her Pulitzer Prize-winning "Fire in the Lake" reported that Tet had "seriously depleted" Vietcong forces and "wiped out" many of their "most experienced cadres," noting that such losses drove "the southern movement for the first time into almost total dependency on the north." Her conclusion: "By all the indices available to the American military, the Tet offensive was a major defeat for the enemy."

And the enemy agreed. In a 1995 interview with the Wall Street Journal, Bui Tin, a member of the North Vietnamese general staff who in 1975 personally received the unconditional surrender of South Vietnam, called North Vietnam's losses in Tet "staggering." Communist forces in the South, he explained, "were nearly wiped out by all the fighting in 1968. It took us until 1971 to re-establish our presence, but we had to use North Vietnamese troops as local guerillas. If the American forces had not begun to withdraw under Nixon in 1969," he added, "they could have punished us severely." And who knows? If Cronkite had not used Tet to nudge for negotiations, maybe American forces would not have begun to withdraw.

Bui Tin said North Vietnamese commander Gen. Vo Nguyen Giap told him Tet was "a military defeat though we had gained the planned political advantages when Johnson agreed to negotiate and did not run for re-election."

Well, who could blame him? The president had "lost Cronkite."

And so be it. The president lost Cronkite, the United States lost Vietnam. But why are the rest of us still stuck with Cronkite's Orwellian packaging as "America's most trusted newsman" 41 years after he totally and calamitously and obstinately blew Tet? The ongoing genuflection before "Uncle Walter" reveals something mighty weird about this body politic -- something beyond the ken of a mere journalist, something more in the line of work of a really good shrink.