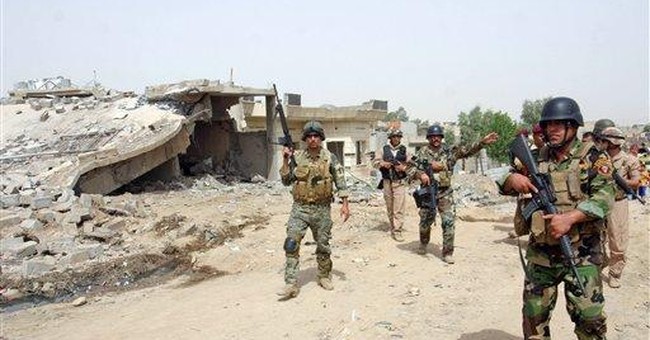 The first I heard about what happened to Lt. Col. Timothy Karcher, the last U.S. commander of Sadr City who recently signed over jurisdiction to Iraqis, was from a reader. He e-mailed me about my last column, which argued that "allies" don't declare victory over each other (as Iraq's prime minister Nouri al-Maliki declared "victory" over the United States), and the sooner we realize Iraq isn't our "ally," the better. It also bemoaned the U.S. military's deference to Iraq, quoting top brass beginning with Gen. Raymond Odierno and including Lt. Col. Karcher, in their execution of what I, myself, consider a futile U.S. policy to Westernize Islamic cultures.

"I appreciate your fervor and feelings about Mr. al-Maliki's comments, but I must say that your biting commentary regarding the quote from Lt. Col Karcher has driven me to reply," he wrote. "You may not be aware," he continued, but since signing over jurisdiction to the Iraqis, Lt. Col. Karcher suffered a roadside bomb attack and lost both legs. One of his men, Sgt. Timothy David of Beaverton, Mich. -- a veteran of six tours in Iraq and Afghanistan -- was killed by a second EFP.

I was not aware. This grievous attack received scant coverage. Pieced together, news briefs tell us that on June 28 -- two days before Iraq's "victory" celebration, and 10 days after Lt. Col. Karcher signed over jurisdiction to Iraq -- the vehicle Lt. Col. Karcher was riding in near Sadr City drove over an explosively formed penetrator (EFP, also called an explosively formed projectile), the particularly lethal, Iranian-made roadside bomb. The blast severed both legs above the knees. After delivering their commander to Baghdad's Combat Support Hospital, his men were hit by a second EFP. It was then that Sgt. David was killed.

Whether al-Maliki counts this as another "great victory" over the "foreign presence" in Iraq, we don't know. The incident elicited no statements, no calls for an investigation into how and why, shortly after turning over security responsibilities to the 11th Iraqi Army Division, Lt. Col. Karcher was hit. And the official silence blankets both Baghdad and Washington, DC.

It was left to ABC's Martha Raddatz, who has been updating the story's essentials at ABC News' blog, to write that June 28 was a "terrible, terrible day for the soldiers of the 2-5 Cavalry Division." But it was a terrible, terrible day for America as well -- or would have been if Americans had known it. And I'm not going to blame Michael-mania for our ignorance. This kind of thing is invisible on the national radar. It doesn't show up in anyone's vision of Iraq -- not that of the Obama administration, which seeks none of the entanglements that an official reckoning of this attack would entail, and not that of the Bush-cons, who persistently see Iraq as a "success." Congress? Dazed. The media? Winding Iraq down -- and besides, no "innocent civilians" were killed.

But back to my original e-mail, which having described Lt. Col. Karcher's ghastly fate, asked me "not to disparage the character of individuals who are putting themselves in harm's way," adding: "They do not make the political decisions, but perform the tasks asked of them."

That I know -- although being under orders is never a sufficient excuse. But are statements made in harm's way exempt from civilian critique? Of course not. I will say that prior knowledge of Lt. Col. Karcher's injuries would certainly have affected my last column. I would have been 10 times more furious about the U.S. foreign policy, from President Bush's to President Obama's, that has placed our best and bravest patriots in mortal danger for what increasingly appears to be, certainly in these last "democratizing" years, a long and costly misadventure with no discernible benefit to the United States. When even such patriots, however, engage in PR to promote Iraq as an "ally," cosset al-Maliki's delusional machismo like a dysfunctional family member, or trumpet an ill-conceived mission to Westernize Islamic cultures, I can't help but respond.

That said, there are not adequate phrases to impress upon the Karcher family the depth of my condolences or the sincerity of my wishes for the recovery, body and mind, of Lt. Col. Timothy Karcher.