When Does Someone Apologize to Our Military? 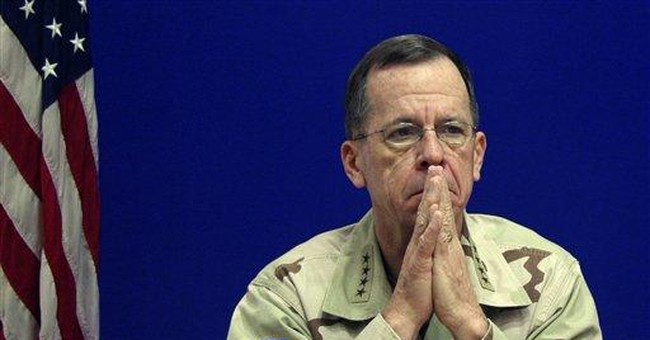 Afghanistan has been dubbed "Obama's War" but maybe it should be called "the war on civilian casualties."

You may have thought the United States was at war in Afghanistan to "defeat" the Taliban and win one for our loyal ally in counter-jihad, the Afghan people. But even that pipedream is beside the point. The latest concern-turned-obsession of the United States is eliminating as many as possible, if not all, "civilian casualties." If we can only do that, according to brain-trust, top-brass, fairy-tale thinking, we will surely win the hearts and minds of the Afghan people. If we can't, Afghan hearts and minds will go to those globally recognized humanitarians, the Taliban.

Indeed, there is something wrong with this picture. That is, if the Afghan people were really with us, they would be, well, really with us -- not constantly on or past the brink of "alienation." But who wants to admit this? It would necessarily mark the end of the Bush and now Obama Islamic nation-building fantasy that began seven years ago with the U.S. invasion of Afghanistan in Operation Infinite Justice. Come to think of it, we hurriedly changed that operation name also for -- guess what? -- fear of alienating Muslims. Tacitly accepting the Islamic position that only Allah dispenses "infinite justice," the U.S. government launched Operation Enduring Freedom and "won" its first battle against Muslim alienation. Chalk one up for dhimmitude.

Now, a new battle against such alienation rages in Afghanistan. "Mullen: Civilian Deaths Hurt US in Afghanistan" reports the Associated Press; "U.S. Envoy Vows to Help Cut Afghan Civilian Deaths," reports the New York Times. The premise of these stories is that it is our own shortcomings, our own failures -- not inculcated Islamic attitudes in the population at large -- that are responsible for Afghan resentment over our nation's continued efforts to defeat the Taliban.

By "incidents like this," Mullen was referring to a battle early this month in Afghanistan's Farah province where, according to Afghan government claims, 140-plus civilians were killed during a U.S. aerial bombardment. Even as the U.S. military was still investigating the incident, U.S. ambassador to Afghanistan Lt. Gen. Karl W. Eikenberry hightailed it to an Afghan mosque with Afghan president Hamid Karzai to present both U.S. condolences and mea culpas.

According to the New York Times, Karzai, who is seeking re-election, promised to rebuild the villagers' houses, to arrange for some of the survivors to go on the haj pilgrimage to Mecca, and to build schools, clinics and roads in the province. This sounds like your tax dollars at work.

"It is clear to me that if we don't get this right, we do run the risk of alienating the Afghan people and creating what David Kilcullen has called the accidental guerilla," Eikenberry later told the New York Times, referring to the Australian former aide to Gen. David Petraeus, who once infamously claimed that if he were a Muslim, he would be a jihadist out of a shared "sense of adventure." (This, truth be told, alienated me.)

As Eikenberry sees it, it's all our fault. Except that it's not. On Wednesday, Centcom issued interim findings indicating that 60 to 65 Taliban were killed in the engagements in question along with 20 to 30 civilians -- a far cry from 140-plus. Which makes me wonder: Could the ambassador have apologized to imposters in that audience of "survivors"? Perish the alienating thought.

Worth mentioning are some details about the battle itself. According to Centcom, after Taliban fighters beheaded three civilians in an Afghan town, Afghan police and army forces were ambushed en route by 200 to 300 waiting Taliban forces. Two policemen were killed. "Outgunned and outmanned," Centcom reports, "the provincial governor requested help from a coalition quick-reaction force."

At this point, Taliban launched another attack on Afghan and U.S. forces, and "a U.S. Navy corpsman was shot in the shoulder attempting to rescue a wounded Afghan soldier. The coalition force used F-18 close-air support to suppress enemy fire from nearby buildings and allow for the rescue of the wounded Afghan first sergeant, who was trapped by heavy Taliban machine-gun and rocket-propelled-grenade fire." Coordinated by a ground commander, "a B-1 bomber crew fired on enemy firing and gathering positions in buildings and a tree grove. Afghan and U.S. forces remained in the area and observed the villagers returning after the fighting had ceased...."

"We strongly condemn the Taliban for their brutality in deliberately targeting and using human shields," a U.S. military spokesman said. Which is precisely what Mullen and Eikenberry should have said, praising our forces for a job well done. If that "alienates" Afghans, good riddance. But meanwhile, an apology is owed here -- to the U.S. military.