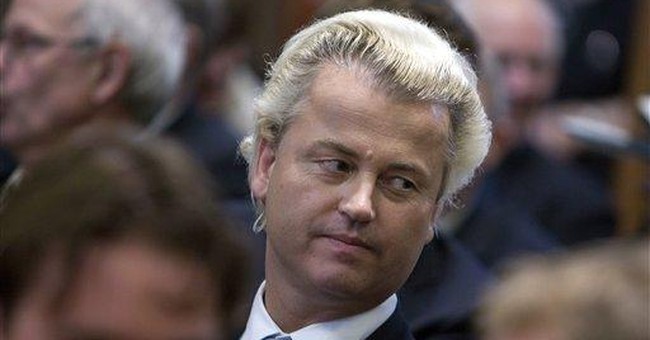 I say this on realizing that just over one year ago, Dutch parliamentarian Geert Wilders -- who has been on a multi-stop media and speaking tour of New York, Boston and Washington, D.C. -- that includes a screening of his film "Fitna," hosted by Sen. Jon Kyl, R-Ariz., in the U.S. Capitol -- was little known outside the Netherlands.

Indeed, most of what people seemed to know about him -- and I refer to those of us irresistibly riveted on Islamization as the great, ignored, existential peril -- was that Wilders, along with then-fellow Dutch parliamentarian Ayaan Hirsi Ali, had lived under threat of assassination since 2004. That was when a five-page Islamic manifesto calling for Wilders' and Hirsi Ali's murder was found impaled with a knife to the stabbed and bullet-riddled corpse of Theo van Gogh, a critic of Islam and great-great-nephew of Vincent van Gogh. Theo, as some will recall, was assassinated, ritualistically, his head nearly severed from his body, on the streets of Amsterdam on the morning of Nov. 2, 2004, by Dutch-Moroccan dual-national Mohammed Bouyeri. Linked to the jihadist Hofstad group, Bouyeri is serving a life sentence without the possibility of parole.

Bouyeri's motive? Criticism of Islam. Van Gogh and Hirsi Ali had together made a very short film titled "Submission" to call attention to the plight of women abused according to Islamic law; Wilders was an outspoken critic of Islamic law in the Netherlands. Bouyeri sought retribution, taking Van Gogh's life and consigning both Hirsi Ali and Wilders to the wary existence of perpetual prey, both of them requiring armed guards to help ensure their continued survival in their own country and beyond.

Hirsi Ali would eventually leave Dutch parliament and the Netherlands, finding renown in a peripatetic if guarded exile as the author of a bestselling memoir, "Infidel," and as a couture-sheathed subject for Vogue magazine. Wilders remained in Dutch politics, his stance against Islamization reported to the wider world in shorthand briefs about the so-called Dutch firebrand with the platinum-blond hair who opposed Islamic law, and wanted to halt Islamic immigration into the Netherlands.

Then, last year, in late January, FoxNews reporter Greg Palkot conducted what was likely the first televised U.S. interview with Wilders. The "Dutch firebrand" had begun making international headlines for his upcoming documentary critique of the Bible -- I mean, the Talmud. Or was it the Bhagavad Gita? No, the 17-minute film was called "Fitna," and it was about the Koran. No matter how short, no matter how small, such critiques of Islam draw notice because Islam brooks no criticism, and responds variously, as we have seen with Salman Rushdie's Satanic Verses, the Danish Mohammed cartoons, the Pope's Regensburg address and other uniquely Islamic flashpoints, with boycotts, lawsuits, threats, riots, arson, attacks -- even murder.

As noted on my blog at the time (dianawest.net), Wilders appeared in that first U.S. interview as "serious, certainly forthright and articulately nonapologetic in his defense of Dutch culture and identity (and, by extension, Western culture and identity) against the Islamization process well under way in his country and the wider West." I would see these same qualities firsthand when I interviewed him last summer in The Hague.

Fox's Palkot, on the other hand, was obviously rattled by Wilders' message, and came across, I wrote, "as what you might call the Nolo Contendere Westerner whose idea of coexistence is based on self-censorship." Palkot practically begged "Wilders to soften, i.e., censor, his views so as not to inflame the Islamic world, including those `moderates' whose so-called moderation morphs into radicalism at the first barb of criticism." Wilders explained he couldn't do that "because such self-censorship would concede victory to those who would impose Islamic law on him and his country."

In many ways, nothing has changed since January 2008. Wilders' anti-Islamization message remains much the same, and it still rattles most media. But where last year, for example, a well-known anchorman told me he had never heard of Wilders, not even at the height of the "Fitna" controversy last March, his show recently interviewed the Dutch MP. On watching other interviews with Wilders this week, one with Fox's Glenn Beck and one with Fox's Bill O'Reilly, it seems safe to say, particularly on considering his progress up and down the Bos-Wash corridor, there's noticeably more room now for Wilders to air his anti-Islamization ideas. It was rather amazing, after all, to hear O'Reilly recap Wilders's argument without even the smallest smirk: "You don't want to deport anybody, but you want to halt immigration (from Islamic countries)." I don't think Americans have ever heard such ideas spoken on prime-time television.

Paradoxically, Wilders' international profile and media allure result from concerted efforts to corral him and censor his message, efforts that recently culminated in a Dutch appeals-court order to prosecute him for "hate speech"; in Jordanian efforts to extradite the Dutch MP and try him for "blasphemy"; and in the shameful British decision to bar Wilders from entering the United Kingdom (where he'd been invited by Lord Malcolm Pearson to speak and show "Fitna" at the House of Lords) as a threat to "community (read: Muslim) harmony."

Non-paradoxically, it is also the result of extended video interviews with Wilders conducted over the last several months by such bloggers as author Robert Spencer, Atlas Shrugs and Tom Trento, all of which are easily accessed on the Internet -- as is "Fitna."

The point is, the conversation about Islam's impact on the West -- on freedom of speech and conscience, on women's rights, on religious equality and other key issues -- has long been "out there." Lately, thanks to a series of nefarious governments' missteps and the boldness of a Dutch political "firebrand," this conversation has suddenly been picked up for the first time and broadcast in new, very public arenas.

The question is, will we be able to keep it going after the Dutchman flies home?