Who Attacked Our Economy? Why Does No One Care? 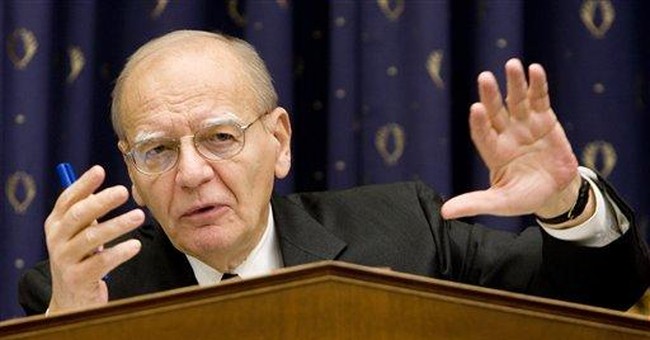 I want you to read something. It's a snatch of transcript from a Jan. 27 C-SPAN interview with Rep. Paul Kanjorski, D-Pa., that has received zero coverage in what we think of as the mainstream media.

To set the C-SPAN scene, Kanjorski is harkening back to the middle of last September, when, as it happens, John McCain was enjoying his brief lead in the presidential polls and the economy as we knew it was imploding. Here's what Kanjorski said:

"I was there when the Secretary (of the Treasury Hank Paulson) and the Chairman of the Federal Reserve (Ben Bernanke) came those days and talked to members of Congress about what was going on. It was about Sept. 15. Here's the facts, we don't even talk about these things.

"On Thursday at about 11 o'clock in the morning, the Federal Reserve noticed a tremendous drawdown of money market accounts in the United States to the tune of $550 billion, as being drawn out in the matter of an hour or two.

"The Treasury opened up its window to help. It pumped $105 billion into the system and quickly realized that they could not stem the tide. We were having an electronic run on the banks. They decided to close the operation, close down the money accounts and announce a guarantee of $250,000 per account so there wouldn't be further panic out there, and that's what actually happened."

"Now we talked at that time about what would happen if that happened. It would have been the end of our economic system and our political system as we know it. And that's why when they made the point we've got to do things quickly, we did."

These are staggering revelations. (Watch them yourself here.) Given their sudden appearance out of the blue, you have to wonder, first, could they possibly be true? If so, why weren't we the people told about this $550 billion electronic run on the banks? And why haven't we heard a word of it since? Even since Kanjorski spoke on C-SPAN last month, there has been scant MSM coverage. The story's biggest exposure came when Rush Limbaugh played the audio and analyzed it on the air this week. Otherwise, the story has been little more than blogfodder, appearing at places such as Politico.com and the Economist blog with little comment. Writing at Portfolio.com this week, Felix Salmon quite decisively dismissed the whole story as "fiction."

Is it? If what Kanjorski says is "fiction," Americans, particularly Americans in Kanjorski's 11th district of Pennsylvania, need to know. After all, this isn't a story that just goes away on its own, particularly not when Paul Kanjorski is chairman of the Capital Markets Subcommittee of the House Financial Services Committee. Of course, incredible as Kanjorski's revelations were, almost equally incredible was the interviewer's failure to ask the next obvious question of national interest: Who or what was responsible for that electronic run on the banks "to the tune of $550 billion"?

That's where Limbaugh went with the story. "Now, let's assume for a second here that elements of this are true," Limbaugh said of Kanjorski's statement. "Let's assume that there was a $550 billion ... electronic run on the banks and money market accounts in one to two hours. The question is who was doing this? Who was withdrawing all this money? And the next question is why? That's where my mind starts exploding, and this is dangerous to have these explosions going this way. Could it have been George Soros? Could it have been a consortium of countries -- Russia, China, Venezuela -- countries that are eager to have Barack Obama elected because they know that will make it easier for them to continue their own foreign policies in the world?"

I've heard serious people float similar theories regarding financial attacks on our economy emanating from the Middle East, but again, who knows?

One thing we do know is that former President Bush made extremely cryptic public statements regarding the stability of our markets at this time in question last September, statements noted by Accuracy in Media's Cliff Kincaid. These began with a Sept. 18 Bush announcement that the Securities and Exchange Commission (SEC) was stepping up its enforcement action "against illegal market manipulation." As Kincaid wondered, manipulation "by whom or what? The President didn't say." On Sept. 19, President Bush further announced that the SEC had "launched rigorous enforcement actions to detect fraud and manipulation in the market. Anyone engaging in illegal financial transactions will be caught and persecuted (sic -- good ol' W.)." Again, what was Bush talking about?

On that same day, Kincaid reports, "the SEC announced a `sweeping expansion of its ongoing investigation into possible market manipulation in the securities of certain financial institutions.'" Why? What was going on? If ever there was a vital, compelling reason for congressional hearings, Kanjorski's "electronic run on the banks" story is it.