Devon Herrick
|
Posted: Jan 25, 2016 10:30 AM
Share   Tweet
The opinions expressed by columnists are their own and do not necessarily represent the views of Townhall.com. 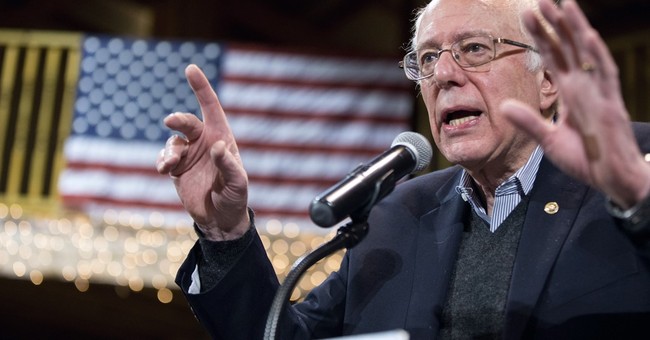 Presidential candidate, Bernie Sanders rolled out his proposal for a single-payer health system, similar to Canada’s and -- to a lesser degree -- Britain, Australia and New Zealand. Sanders’ Medicare for All proposal is a fairytale of wishful thinking and Robin Hood dreams. Whereas the other Col. Sanders is famous for a secret recipe with 14 herbs and spices, Bernie Sanders has only one not-so-secret ingredient -- socialism.

Sanders proposal is built on the premise that most people can have something for nothing. Workers would pay a 2.2 percent payroll tax on wages, while employers would have 6.2 percent tax on employees’ wages. This is a rather disingenuous way of making workers think they’re getting off cheap. Labor economist (and anybody with common sense) understands that anything that makes workers more costly to employ effects their take home pay. Stated more accurately, Sanders plan would tax wages at a rate of 8.4 percent (2.2 percent + 6.2 percent) that would reduce workers’ take home pay by, say, around 8.4 percent. Presumably, this is on top of the 2.9 percent Medicare payroll tax. That works out to an 11.3 percent payroll tax for health care. Add in Social Security taxes (12.4 percent) and the first one-quarter of each worker’s wages are syphoned off and flushed down a Ponzi scheme drain. It would also require additional income taxes to pay for a huge increase in government spending. Marginal tax rates on higher-income households would range from 37 percent to 52 percent.

Bernie Sanders is from Vermont. His home state has already explored implementing a single-payer system. The idea was officially abandoned in 2015 as being far too expensive for taxpayers. One thing that sank the Vermont initiative was that activists supporting single-payer couldn’t fathom a health plan that required any cost-sharing. The actuarial value of the Vermont proposal was 94 percent! Faced with little cost-sharing, every trip to the doctors’ office would be an experiment in how many billable services could be crammed into any given appointment. Obamacare plans in the exchange are either platinum, gold, silver or bronze. In terms of actuarial value the backers wanted Vermont residents to have gold-plated platinum plans encrusted with diamonds!

The Rand HI found patients exposed to significant cost-sharing reduced medical expenditure by about 30% without harming their health. Imagine how much utilization would rise with no cost-sharing and care that’s free at the point of service! Proponents like to talk about all the administrative costs the U.S. would save with Medicare for All, and how much care that would buy for poor households. But utilization would go up much more than the savings returned from lower administrative costs.

In other words, Sander’s half-baked Medicare for-All plan is a big money loser -- unless he pursues the strategy that all single-payer plans have to use. That strategy involves the “R” word… rationing. Any system has to use some type of rationing of scarce resources. That’s why I refer to Sander’s plan (and all Single-Payer proposals) as Medicaid for All. Either taxes have to rise, or benefits have to fall. But the primary way single-payer systems save money is through monopsony power. When there is only one entity legally allowed to pay for health care, that entity has absolute control over price. Not only that, it can also dictate the services it’s willing to pay for and the ones it won’t. Remember the Golden Rule, “he who has the gold makes the rules!” For instance, Canadian Medicare uses monopsony power to assign global budgets to hospitals, set provider fees and uses price controls on drugs, medical devices, medical equipment and so on. The British NHS refuses to cover some cancer therapies.

At least in theory, a single-payer would pay prices barely sufficient to entice the lowest number of providers necessary to (almost) meet the needs of patients. In most systems, waiting lists are necessary to ensure: 1) hospitals, clinics and facilities are utilized at full capacity; 2) waiting lists to allow some people getting better on their own or going away; 3) rationing by waiting tempers excess utilization by extracting another price – one’s time.

Bernie Sanders’ proposal is little more than wishful thinking. It’s evident that neither he nor his team have thought it through. If they had and communicated the reality of that vision, you can bet Americans would run away from it fast.