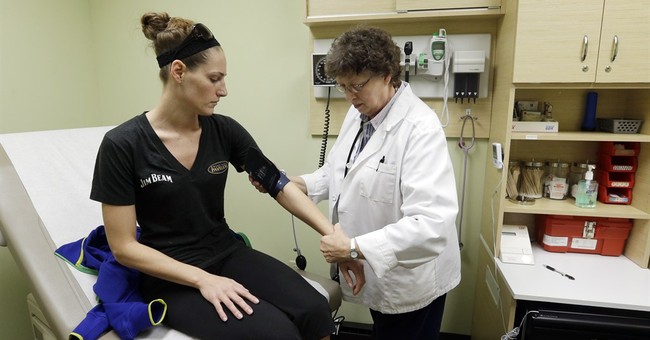 The U.S. health care system is unsustainable but it could be dramatically improved with more efficient care of our sickest patients. Medical spending is rising at twice the rate of income growth. Medical prices are rising at three times the rate of consumer inflation.

The Affordable Care Act (ACA) was sold to the American people as a means to fix those problems and make health care affordable. The vehicle to achieve this is, implausibly, a requirement that we all purchase overpriced health insurance. In addition to stipulating the benefit package Americans are allowed to have, ACA regulations also force insurers to accept all enrollees -- including people in poor health. Moreover, the rates must reflect average health in a community rather than individuals’ health status. In insurance parlance, this is what’s known as guaranteed issue/community rating. The law does allow charging some people more based on their age, such as charging people in their late 50s more than the rates paid by people in their 20s. But premiums cannot be higher for enrollees with high medical bills.

How does this work in practice? For Obamacare to work, an army of young people need to willingly pay $3,000 per year in premiums, while knowing they will not even come close to reaching their $3,000 deductible. An average of about one baby is born to women sometime in their 20s. But that’s about the only major expense a 20-something will incur. For their part, hoards of healthy 40-somethings need to pay $4,000 in premiums for a $4,000 deductible they will never reach; and healthy 50-somethings need to pay $5,000 in premiums for a $6,000 deductible most of whom will never surpass. Sounds like a bargain, right? To make health care “affordable,” millions of Americans need to purchase coverage that pays virtually none of their medical bills. In other words, access to affordable care under Obamacare is premised on the idea of that most people necessarily must get a raw deal. That is, most people (who are healthy) must be overcharged to offset the higher costs for unhealthy enrollees, who would otherwise find their coverage unaffordable if charged premiums based on their own health risk.

Average health spending per capita in the United States is around $8,600 annually. But it’s not distributed evenly. About 80 percent of the enrollees are healthy like me. We collectively consume only 20 percent of the health care dollars used; about $2,150 per year on average. However, some people are ticking time bombs. The least healthy 20 percent spend an average of about $35,000 yearly.

These are only averages, but about 10 percent of the population has health concerns accounting for 17 percent of spending. Another 5 percent have serious health concerns accounting for 16 percent of health spending expenditures. The next 4 percent consumes nearly one-quarter of health care dollars (27 percent), while the sickest 1 percent of accounts for 20 percent of spending. Think about that for a moment: the sickest 5 percent of the population consumes nearly half of all health care dollars. Many are aged seniors in their last months of life.

Obamacare purposely attempts to make health care affordable by forcing the healthy 80 percent to pay more of the costs for the unhealthy 20 percent. But that does not make care affordable; it merely shifts the costs from one party to another. We could all pay a community rated share of the nation’s medical bills if everyone merely sent a check to the government for $895 a month. That is sufficient to pay an equal share of the nation’s medical bills and includes an extra 20 percent so the government could contract with insurers to negotiate with hospitals, process claims and eke out a profit. But that is not likely to work since a lot of kindergarteners cannot be trusted to pay their fair share out of their lunch money.

We will never get a handle on runaway health spending until we get a handle on what to do about the 20 percent of the population that consumes 80 percent of health care dollars. We don’t necessarily have to throw them under the bus, or put them on an ice floe to drift away and die of exposure. Multiple studies have found that about 30 percent of medical care is wasteful, unnecessary or possibly even harmful. If we could better manage the care provided the sickest 20 percent of the population we could possibly reduce expenditures by one-quarter or more.

The perverse way Obamacare attempts to make health care affordable is both ineffective and unconscionable. Moreover, it will do nothing to reduce the rising cost of health care. Rather than disrupt the lives of the 80 percent by overcharging them to finance our unsustainable health care system, why not improve the way medical care is provided the sickest 20 percent of Americans?