Deroy Murdock
|
Posted: Sep 25, 2019 12:01 AM
Share   Tweet
The opinions expressed by columnists are their own and do not necessarily represent the views of Townhall.com. 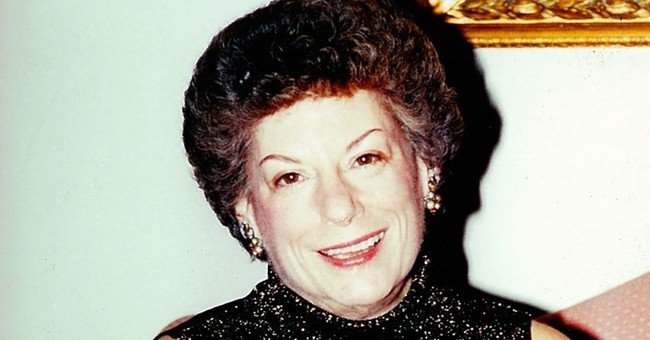 NEW YORK — The Right recently lost a sunny warrior, with the passage of Helen Blackwell, after a long illness. The Louisiana-born, Virginia-based conservative activist spent her life fighting for constitutionalism, human liberty, and limited government and against socialism — both foreign and domestic.

“More than half a century of her work in the conservative vineyards never dimmed her principles, her effectiveness, or her graciousness,” my friend Quin Hillyer recalled in The Washington Examiner. “As the Virginia state chairman of Phyllis Schlafly’s Eagle Forum for a quarter century, as the three-time chairman of the Arlington County, Virginia Republican Committee, and as director of the Virginia Conservative Alliance, Mrs. Blackwell’s reputation was that of someone with nerves of steel but heart of cheer who ‘got things done.’”

I remember Helen Blackwell from my days in Young Americans for Freedom, while at Georgetown University (with Hillyer, among a cast of thousands) from 1982 to 1986. On several occasions, she drove a number of us youthful Righties into northern Virginia to canvass neighborhoods, door to door, on behalf of candidates who shared our ideals. Blackwell and I spoke at CPAC and similar events and sat together at a number of conservative banquets and other functions. She always was kind, vivacious, sincerely interested in my progress in school, and funny as hell.

She is survived by Morton Blackwell, her husband of 47 years. He is a life-long soldier on the Right and is the founder and president of the Leadership Institute. Since 1979, it has been a magnificent training ground for Righties on the rise. I am proud to be an LI alumnus. Soon after his wife’s departure, Morton told me: “Helen was one of a kind.”

"In eulogizing wife Helen," Newsmax White House correspondent John Gizzi noted via Twitter, "Morton Blackwell recalled how they went to costume parties -- once as Wilbur Mills & Fanne Fox, another time as Sen John Warner, R. Va, & Elizabeth Taylor." Mills and Fox made quite a splash in 1974, when the Arkansas Democrat and then-chairman of the House Ways and Means Committee was drunk-driving near Washington, D.C.'s waterfront with his passenger, an Argentine stripper. To evade pursuing cops, Mills hopped into the Tidal basin. Mills resigned two months later, and Fox changed her stage name from "The Argentine Firecracker" to "The Tidal Basin Bombshell."

About the only bright side to losses such as these is that obituaries teach us things we never knew about people who have left us. For instance, I now know Helen Blackwell’s maiden name: Helen Reddy. Thus, this Helen Reddy shared a name with singer Helen Reddy of “I Am Woman” fame. While the latter roared this 1970s feminist anthem, the former got married, changed her name, and went to work for Phyllis Schlafly — who gleefully sank the Equal Rights Amendment.

Also, I had no idea that Mrs. Blackwell studied art and was a volunteer docent at the National Gallery of Art. Funny, for better or worse, most people usually think of such pursuits as pretty much Leftie territory. And, yet, there was Helen Blackwell — who made Margaret Thatcher look like Susan Collins — standing in the Smithsonian and explaining paintings and sculpture to tourists. What a splendid image by which to remember this American patriot and tireless fighter in the conservative movement.

Deroy Murdock is a Manhattan-based Fox News Contributor, a contributing editor with National Review Online, and a senior fellow with the London Center for Policy Research.