Deroy Murdock
|
Posted: Jan 21, 2019 8:32 PM
Share   Tweet
The opinions expressed by columnists are their own and do not necessarily represent the views of Townhall.com. 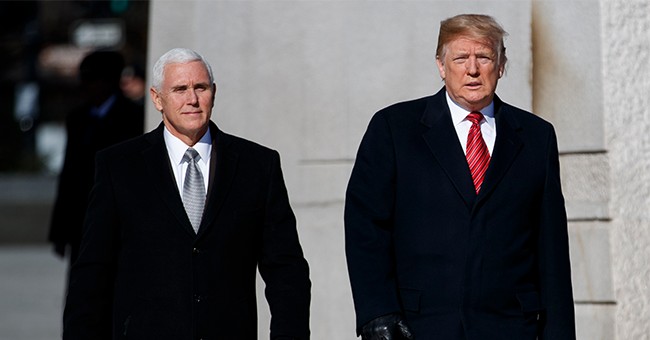 The answer from the media/Democrat/Left (excuse the redundancy) is crystal clear: Duke!

“This president has said and done so many insensitive and bigoted and racist things that if you support him, people like me want to understand why you ignored so much in order to support this man,” CNN anchor Don Lemon foamed at the mouth last week. “You may not think you are a racist…but you certainly had to overlook racism and bigotry in order to make that decision.”

“Yeah, Yeah. No question” that Trump is a racist, according to the Democrat Party’s new leader, Congresswoman Alexandria Ocasio-Cortez of New York.“The president certainly didn’t invent racism,” she said in a surprising concession to Anderson Cooper on 60 Minutes. “But he’s also given a voice to it and expanded it and created a platform for those things.”

“Hitler did not start the Nazi Party, but he took over the party with charisma and leadership. The Nazis and Hitler became synonymous. Much like how Hitler took over the Nazi party, Trump has taken over the Republican Party. It’s now known as the Trump Republican Party.” Just as European Jews fell victim to Nazi tyranny, Jones explained, “Americans, particularly black Americans, can’t afford to make that same mistake about the harm that could be done by a man named Hitler or a man named Trump.”

But as much as President Trump’s enemies hurl race cards at him like kung fu ninja throwing stars, his statements and actions place him far closer to King and far away from Duke.

Consider these King-worthy highlights from Trump’s presidential record, of which the Left hopes Americans will remain largely unaware.

• Just this morning, President Trump and Vice President Mike Pence laid a wreath at Dr. King’s memorial in Washington, D.C. The Trump-hating media already are whining like stuck pigs that Trump and Pence stayed for only two minutes. But how long does it take to lay a wreath? And if they had remained longer, the chorus of complaint would have slammed the winners of the 2016 election for keeping regular visitors away while they hogged the venue in their security bubble. Trump easily could have done other things today than honor King. President David Duke surely would not have made the trip.

• Earlier, Trump stated via Twitter: “Today we celebrate Dr. Martin Luther King, Jr. for standing up for the self-evident truth Americans hold dear, that no matter what the color of our skin or the place of our birth, we are all created equal by God.”

• President Duke would not have issued the MLK Day proclamation that President Trump did — again something that a racist chief executive could have avoided with zero effort. Instead, Trump announced: “Today, as we pause to mark the life and legacy of Dr. Martin Luther King, Jr., we recommit ourselves to the advancement of equality and justice for all Americans, and to the full realization of his worthy dream.”

“I am committed to expanding opportunity for all Americans,” Trump added. “We have added more than 5 million new jobs to the economy over the past 2 years and unemployment rates for African Americans, Hispanic Americans, Asian Americans, and Americans without a high school degree have reached record lows.”

Trump tried to bring the nation together when he declared, “United as one American family, we will not rest — and we will never be satisfied — until the promise of this great Nation is accessible to each American in each new generation…faith and love unites us together as one great American family.”

President Duke’s hand would fall off before he would sign such a document.

• On Saturday, President Trump hosted what seems to be the very first naturalization ceremony ever held in the Oval Office. The allegedly “anti-immigrant, racist strongman” welcomed these freshly minted citizens, not from Austria, Germany, and Norway but from Bolivia, Iraq, Jamaica, South Korea, and the United Kingdom.

“I am truly thrilled to welcome the five newest members of our great American family,” Trump said in the Oval Office. “Our whole nation embraces you with open arms and joyful hearts.”

“You’re all at the beginning of a new and extraordinary adventure,” Trump continued. “With the rights and freedoms you enjoy as Americans, there is nothing you cannot achieve.”

“Again,” Trump concluded, “I want to congratulate you and welcome you to the family.”

The supposedly immigrant-hating Trump saluted “our nation’s proud history of welcoming legal immigrants from all over the world into our national family.”

“All Americans, whether first generation or tenth generation, are bound together in love and loyalty, friendship and affection,” Trump noted. “We are all equal.  We are one team, and one people, proudly saluting one great American flag.  We believe in a safe and lawful system of immigration, one that upholds our laws, our traditions, and our most cherished values.”

• Late last year, President Trump approved bipartisan criminal-justice reform legislation. “I was proud to sign into law the First Step Act, which will prepare inmates to successfully rejoin society and effect commonsense reforms to make our justice system fairer for all Americans,” Trump said in his MLK Day proclamation. “Through recidivism reduction programs that provide vocational training, education, and mental healthcare, non-violent offenders can have a chance at redemption and an opportunity to fulfill a better destiny.”

This new law disproportionately benefits black inmates who have endured the very same mass incarceration that Black Lives Matter and similar groups have decried. Obama had eight years to enact criminal-justice reform, but he couldn’t be bothered. He had other priorities than helping black Americans, and others, this way. Instead, he bailed out Iran’s terror regime by air freighting the ayatollahs millions of dollars in laundered cash and unfreezing billions more in financial assets.

• Trump has declared this National School Choice Week. His and his administration’s commitment to breaking the Democrat/left/union lock on ghetto and barrio schools offers serious hope to black and brown students trapped on campuses that tragically cultivate ignorance.

“Family demand for public charter schools has continued to grow,” Trump stated. “And, importantly, we have encouraged States, local communities, and families to refocus education policy where it belongs — on what is best for each child.”

Specifically, Trump said, “The number of students receiving a D.C. Opportunity Scholarship has increased by nearly 50 percent under my Administration.” This huge increase in D.C. voucher recipients is a 180-degree departure from Obama’s approach. His shameful, toxic hostility to this escape hatch for some of America’s most ill-served minority students (60 percent black, 20 percent Hispanic) included early and relentless efforts to defund and shutter this program.

• President Trump’s signature Tax Cuts and Jobs Act authorized some 9,000 communities to become Opportunity Zones. These low-income areas now will offer tax incentives, thus boosting prospects for employment and growth in areas that previously offered little. This will be great for Americans, not least blacks and Hispanics who populate these neighborhoods.

“With Opportunity Zones, we are drawing investment into neglected and underserved communities of America so that all Americans, regardless of zip code, have access to the American Dream,” Trump said on December 12. “The Treasury Department has estimated that, as a result of these tax incentives, private businesses will invest $100 billion in Opportunity Zones. And that will be incredible.”

“Charlottesville!” the media/Democrat/Left will scream in reply. “All Mexicans are rapists!” they will misquote Trump, the facts be damned.

No doubt, Trump often should choose his words more carefully and paint with narrower brushes. But there was violence on both sides in the Charlottesville riot, as well as good people for and against removing a controversial statue of Confederate General Robert E. Lee. Gentle, inclusive words like those cited above would have served Trump well when he announced his candidacy, in part noting the genuine problem of illegal aliens who bloody American soil.

That said, a fair assessment of President Trump’s statements and policies demolishes the media/Democrat/Left’s caricature of him as a David Duke-like racist. Indeed, such an evaluation places him well within Dr. King’s dream of a nation rooted in racial equality where Americans “will not be judged by the color of their skin but by the content of their character.”

Deroy Murdock is a Manhattan-based Fox News Contributor, a contributing editor with National Review Online, and a senior fellow with the London Center for Policy Research. Michael Malarkey furnished research for this opinion piece.