Deroy Murdock
|
Posted: Feb 12, 2016 9:19 AM
Share   Tweet
The opinions expressed by columnists are their own and do not necessarily represent the views of Townhall.com. 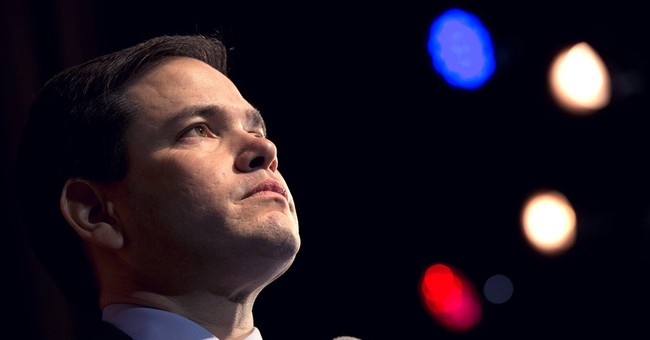 MANCHESTER, N.H. — The mood at the Radisson Hotel here was restrained Tuesday night, to say the least. Voters and volunteers who backed Senator Marco Rubio (R – Florida) grew increasingly subdued as election returns showed him earning the No. 5 spot in the GOP presidential primary.

Rubio’s disappointing 10.6 percent finish must have surprised observers as seasoned as New Hampshire Union Leader editorial-page editor (and Chris Christie supporter) Grant Bosse. Over lunch at the Thirsty Moose Taphouse on Elm Street, he said on Tuesday afternoon: “I don’t think Marco will drop below third.”

Rubio himself acknowledged the problem. Despite the “Marcomentum” after he barely missed second place in the Iowa Caucus, he then whiffed February 6’s GOP debate.

“I know many people are disappointed,” Rubio admitted in the Radisson’s ballroom. “I want you to understand something. Our disappointment tonight is not on you, it’s on me. It’s on me. I did not do wellon Saturday night. So, listen to this: That will never happen again.”

Rubio’s followers loudly cheered his display of personal responsibility for his self-inflicted wounds. His statement also was impressive in this age of widespread finger-pointing. Still, Rubio easily could have identified another font of his misfortune: the relentless, eight-digit attacks against him by former governor Jeb Bush (R – Florida). The latest pretender from the House of Bush won fourth place. And he won it ugly.

According to media monitor SMG Delta, Bush’s super PAC, Right to Rise, spent roughly $10.2 million in New Hampshire slamming Rubio between December 8 and election night. This included some $8 million in attack ads in January alone, or about $250,000 per day. Right to Rise broadcast more than 41 hours of anti-Rubio spots. This equals 4,920 half-minute commercials, all aimed at wrecking Rubio.

Atop this broadcast onslaught, Bosse recalls “an avalanche of slick paper” filling his mailbox. “We received maybe two dozen pieces hitting Rubio, a dozen hitting Christie, and a handful hitting Cruz and Kasich.” Recovering journalist and Rubio campaign surrogate Drew Cline tells me, “I would estimate that, from early December through the primary, we got more than a couple dozen anti-Rubio mailers from Right to Rise. We would sometimes get two to four a day.”

“My wife confirms that we received at least 15 anti-Marco mailings,” says Christopher Wolfe, former New Hampshire Republican Party treasurer. “There also were phone calls and very assertive Bush supporters knocking on the door and trying to arm wrestle her to support him. Yes, Bush was leading an all-out attack on Marco.”

Right to Rise’s anti-Rubio jihad earned a rebuke from the U.S. Senate’s most senior Republican.

“I would rather have any leadership PAC support the person they were formed to support, not by running down others,” Senate President pro tem Orrin Hatch (R – Utah) told The Hill. “I would not do that. I’d tell them to do things that support Jeb.”

“Rubio’s weaknesses had been hammered by weeks of direct mail and television by Christie and Bush, questioning his use of party credit cards, his flip-flopping on immigration, and especially his judgment,” says Andrew E. Smith, Ph.D., director of the University of New Hampshire’s Survey Center. “Had Rubio turned in an average performance in the debate, he might still be the media darling, and the darling of the GOP establishment. Needless to say, the debate has left both all shook up.”

While Rubio did not leave his Republican rivals unmentioned, he generally ran a positive campaign. He concentrated on how he would reinvigorate America’s promise and potential, by untethering the republic from the deadweight loss that is Washington, D.C.

Characteristically, Rubio focused his fire on Democrats, rather than Republicans.

“Bernie Sanders is a socialist - nice guy – a nice socialist,” Rubio said. “But he’s a socialist. We can’t go down the road to socialism. People come to this country to get away from socialism.”

“Hillary Clinton tonight,” Rubio added, “the FBI confirmed that they are investigating the usage of her e-mails. We cannot elect a president that’s under FBI investigation.”

As the action heads south, will Rubio sharpen his machete and go after his former mentor?

“South Carolina is gonna be a bloodbath,” one Rubio aide predicted to Politico.com “Jeb and his people wanted to attack Marco in New Hampshire about abortion? Let’s see how that plays down there. And then there’s Common Core,” Washington’s top-down scheme to control neighborhood schools. Bush would save it. Rubio would scrap it. As his website elaborates: “On Day One, Marco will issue an Executive Order directing federal agencies to stop any and all activity related to implementing or encouraging Common Core.”