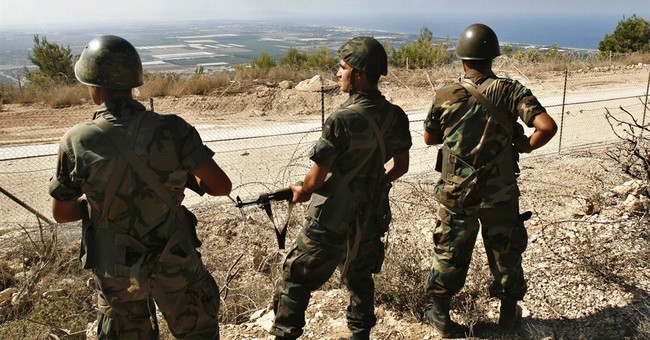 Tel Aviv — Israel routinely gets crucified by its enemies, not least for the behavior of the Israeli military. The Jewish state’s reckless soldiers eagerly spill Arab blood, as if for sport. Or so the story goes.

“The IDF faces a challenge,” according to Colonel Richard Kemp, former commander of British forces in Afghanistan and an outside expert on the IDF’s strategy and tactics. “It is the automatic, Pavlovian presumption by many in the international media, and international human rights groups, that the IDF are in the wrong, that they are abusing human rights.”

If Israel’s critics would calm down and face facts, they would be astonished by the IDF’s efforts to reduce or eliminate civilian casualties through its policy of military restraint.

Captain O (as I was asked to call him) is stationed at the Dov Air Base just north of Tel Aviv, in the shadows of a huge power plant. The serviceman recently discussed this topic with a delegation of U.S. journalists who visited here on a fact-finding mission sponsored by the America-Israel Friendship League. Captain O is a charming Israeli with British-born parents, medium-brown hair, and blue eyes. The surprising result looks and sounds like a twenty-something, Jewish Jude Law in a pilot’s uniform.

A flying camel is the logo of the 100 Squadron of the Israeli Air Force, headquartered on this base. “In 1947, the Arabs said Israel will have an air force the day camels grow wings,” Captain O smiles. The warplanes that fill the sun-drenched tarmac nearby more than answer those Arab skeptics.

Dov specializes in aerial surveillance and real-time visual intelligence to support other operational assets. The 100th flies U.S.-made Bonanza A-36 aircraft retrofitted for military use.

“We will do almost anything to prevent killing or hurting civilians,” Captain O says inside a small, spartan briefing room. “We try to pinpoint our targets. We destroy the rocket launchers, but avoid the kindergarten. We spend time and money to do this.”

Last November’s Operation Pillar Defense involved some 1,500 targets. Independent of Israel’s Iron Dome anti-missile shield, the goal of Pillar Defense was to foil the Palestinian rockets that rained down from the Gaza Strip onto southern Israel and, eventually, the outskirts of Tel Aviv and Jerusalem. Gaza is controlled by Hamas, a radical Islamofascist terrorist group that enforces Sharia law.

The preamble of the Covenant of the Islamic Resistance Movement (Hamas’s official name) states: “Israel will exist and will continue to exist until Islam will obliterate it, just as it obliterated others before it.” According to Article 7 of the covenant, “The Day of Judgment will not come about until Muslims fight Jews and kill them.” Article 13 also is instructive: “There is no solution for the Palestinian problem except by jihad. Initiatives, proposals, and international conferences are but a waste of time, an exercise in futility.”

Before the IDF hit Hamas-operated targets, it scrutinized them to protect the safety of non-combatants.

“Our goal,” Captain O says, is to assure that “no innocent civilians are hurt.”

This objective is complicated severely by the fact that Hamas routinely locates its weapons among civilians, for reasons discussed below. It does so in total violation of the Geneva Convention and some 700 years of the just-war tradition.

Amid these difficulties during Pillar Defense, the IDF aimed to blast a residential building in Gaza that it believed contained ammunition. While the IDF simply could have bombed the joint, it took multiple steps to protect Palestinian civilians.

First, IDF aircraft released leaflets in the area to tell people that the building would be smashed from above, and that they should evacuate. This tactic also was employed in 2009’s Operation Cast Lead, a similar campaign to stop Hamas’s missiles.

“The Israelis dropped a million leaflets warning the population of impending attacks and phoned tens of thousands of Palestinian households in Gaza urging them in Arabic to leave homes where Hamas might have stashed weapons or be preparing to fight,” Great Britain’s Colonel Kemp said of that operation. “Similar messages were passed on in Arabic on Israeli radio broadcasts.” He added: “When possible, they left at least four hours’ notice to civilians to leave areas designated for attack, an action that handed a distinct advantage to Hamas.”

Second, in case anyone thought the Israelis were bluffing, the IDF signaled that they were serious. Their method is called “Knock on the Door.” It involves dropping a small, low-impact bomb on the roof of the targeted building. This tells people the IDF is not kidding and will return soon to take care of business.

Third, once it was empty, the IDF bombed the building, and Hamas’s weapons were rendered harmless.

Hamas, Captain O says, gives Gazans a totally different message: Rather than encourage these civilians to flee, Hamas tells them that it is their Islamic duty to remain in their apartments and become martyrs. Thus, Hamas tries to use innocent men, women, and children as human shields. If this successfully prevents Israel from neutralizing ammunition dumps, bomb factories, and rocket launchers, all the better for Hamas. And if Israel bombs such facilities and wounds or kills civilians, Hamas can wheel in the compliant and sympathetic global media to document the latest example of “Israeli atrocities.”

Journalists should tell the world about cases of Israeli mercy, such as its plan to take out a Hamas transmissions tower in Gaza. As a black-and-white airborne surveillance video played by Captain O clearly shows, the antenna was near a field where young Palestinian men were playing soccer. So the Israeli pilots waited until the soccer field was empty. Once the risk of injuring or killing these Palestinians had passed, the Israeli aircraft demolished the Hamas transmitter.

“As far as the IDF is concerned,” Captain O says, when it comes to acceptable civilian casualties, “it’s no women, no children.”

According to Chicago-born IDF captain Eytan Buchman, the IDF’s tear-gas guns feature crosshairs in their scopes. This allows Israeli soldiers to aim at the legs of protesters, rather than at their heads or anywhere else where the IDF might inflict debilitating, permanent, or fatal injuries. It also uses “skunk water” to disperse crowds. While this reeks, it is not lethal.

Meanwhile, Captain O shows another video. It captures two young Gazan men strolling along a rural path. They turn left and enter what appears to be an olive grove. Perhaps 50 yards from the road, they step right up to a rocket launcher, hidden among the trees. They lift a tarp, examine the weapon it covers, re-conceal it, and then walk away.

At this point, one expects the video to show an air-to-ground missile blow to smithereens both the deadly projectile and the two men who seemed to know exactly where it was, despite its hidden location.

Instead, the IDF’s aircraft wait until the men have returned to the road and drifted away. Once they reach a safe distance, the IDF annihilates the target.

Why not pull the trigger sooner and eliminate both the murderous missile and what appear to be two terrorists who dutifully checked in on it?

“There is a chance they were innocent,” Captain O says.

Such institutionalized caution led Colonel Kemp to tell the U.N. Human Rights Council the following in October 2009: “Based on my knowledge and experience, I can say this: During Operation Cast Lead, the Israeli Defense Forces did more to safeguard the rights of civilians in a combat zone than any other army in the history of warfare.”

While admirable on many levels, such trigger shyness also seems borderline suicidal. Not only is Israel not as reckless as her enemies claim; the IDF likely lets some terrorists live to kill another day.

Israel’s attempts to limit civilian bloodshed also contrast severely with Hamas, which heaves missiles onto playgrounds full of Jewish schoolchildren. In the town of Sderot, Israeli kids hear alarms when rockets are en route. At one such facility, they have just 15 seconds to dash into a giant concrete caterpillar. It looks festive — but actually is a cheerfully painted bomb shelter.

In all, Hamas’s rockets can slam any of 994,000 Israelis within 60 seconds of their launch in Gaza.

Given Hamas’s disdain for human life, why doesn’t the IDF scrap the warning flyers and “knocks on the door” and just let its bombs rip?

“We won’t be able to live with these people if we just butcher them,” Captain O says. He makes a fascinating point. Putting aside for a moment America’s benevolent occupation of Japan after World War II, the U.S. did detonate atomic bombs over Hiroshima and Nagasaki. It then shipped the vast majority of its soldiers back home, all the way across the Pacific. Most Americans gave Japan little thought until Datsuns, Mazdas, and Toyotas arrived in the mid 1970s.

Israelis lack that luxury. They must stay put, with the Palestinians right next door and their Arab and Muslim cousins inside Israel, as citizens of the Jewish state. As such, the IDF’s military moderation is as much about co-existing with its neighbors tomorrow as it is about enduring them today.

— Deroy Murdock is a Manhattan-based Fox News Contributor, a nationally syndicated columnist with the Scripps Howard News Service, and a media fellow with the Hoover Institution on War, Revolution, and Peace at Stanford University. Murdock visited Israel on a media tour sponsored by the America-Israel Friendship League.

A version of this article appeared earlier at National Review Online.