Democrat Racism and the Border

Derek Hunter
|
Posted: Sep 22, 2022 12:01 AM
Share   Tweet
The opinions expressed by columnists are their own and do not necessarily represent the views of Townhall.com. 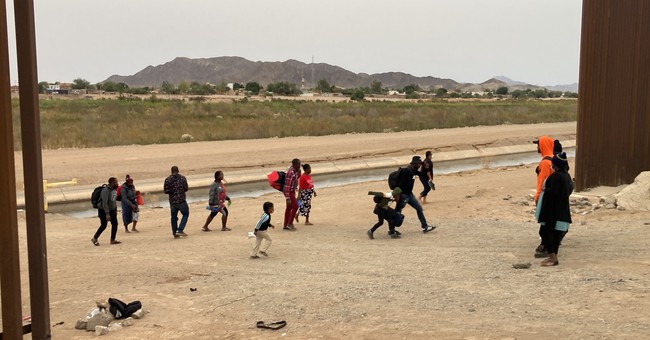 The racism of the left is not always bubbling just below the surface, it is the surface. It’s weird for people who claim the hearing of a dog to hear secret whistles of racism to be completely deaf when it comes to the words that exit their own teeth caves, but the reality is it’s not really racism it is indifference. Progressive Democrats are the first to tell anyone with a microphone that they care deeply about various people or issues, but once the red light goes off it is straight back to not giving a damn. Do the “royal” pieces on a chess board care when a pawn is lost? Of course not. That’s how Democrats view these illegal aliens, and Americans impacted by them too, for that matter.

If you talk about welfare reform, some member of the Morning Joe crew will call you a secret Klansman (which is weird since the Venn Diagram of the KKK and the Democrat Party was a circle). That being said, what you won’t hear is anything remotely close to proof. Proof is for suckers.

But if you actually listen to these leftists talk, you will hear literal racism and bigotry straight out of their past.

White House buffoon, the “historic” Karine Jean-Pierre, told wildly unpopular MSNBC host Alex Wagner that sending a whole 50 illegal aliens to Martha’s Vineyard “literally put people’s lives at risk.” How? Wagner didn’t follow-up because the left doesn’t follow-up, and Jean-Pierre didn’t explain because she’s incapable of explaining something as basic as water can make you wet. But when a liberal in a position of authority says something it is taken as gospel by the lower-ranking drones.

“So, the way that we see it,” KJP read from her briefing script, “alerting Fox News and not city or state officials about a plan to abandon children fleeing communism on the side of the street is not burden-sharing, is not the definition we see of burden-sharing. It is a cruel, premeditated political stunt.” They really hate illegal aliens being brought to where they live, which in this case was outside the Vice-President’s residence in Washington, DC.

Putting aside the fact that Democrats are actively pursuing an agenda filled with the tenets of the ideology the illegals are allegedly fleeing, what’s worthy of note about this is these weren’t unaccompanied kids. This administration has embraced the idea of flying those illegal alien kids crossing the border to wherever in the country a note pinned to their underwear says a family member or someone willing to take care of them is. They’ll call a random phone number and put a 5-year-old on a plane to meet that person, possibly for the first time, without even considering the possibility that they’ve just delivered a trafficked future sex slave to an exploiter.

Just as bad is the reality that if the person on the other end of that phone call were a parent or some family member, they are complicit in the abuse of that child and, thanks to Democrats, will face zero repercussions for it.

What do I mean? What would you call forcing a kid to march thousands of miles with no family or friends, entrusted to drug cartels with a history of sexual abuse of kids? If you sent your 5-year-old a mile away to pick up a quart of milk there’s a good chance some liberal would call police on you for abuse and you’d be arrested. But if an illegal alien family marches their kid with strangers thousands of miles, they are met with a plane ticket to wherever and verbal praise as somehow morally superior to Americans and better for the economy. It’s sick.

Meanwhile, liberal “law enforcement” is investigating Governor Ron DeSantis to determine if he has committed a crime. Again, Democrats parroting a noted communist, Stalin’s right-hand Lavrentiy Beria, who famously said, ““Show me the man and I’ll show you the crime.”

That same “law enforcement,” by the way, has his own idea on what to do with the more than 3 million illegals who’ve entered the country this year (2.2 million arrested, more than a million who “got away”) – give them restaurant jobs! Bringing it back to the dog whistle, the tool going after DeSantis thinks illegal aliens equal waiting tables, cooking and cleaning. Sure, he’s also Hispanic, but progressives are progressives first, anything else a distant second. He didn’t come up with that idea in a vacuum, it’s how leftists talk to each other when no else is around.

Of course, the logistics of employing these millions in any industry is never mentioned. Most of these people not only can’t read or speak English, they are illiterate in their own language as well. Yes, I realize the schools in cities where Democrats have had generational control aren’t exactly churning out the bulk of the members of Oprah’s book of the month club, a fact that doesn’t seem to bother any Democrats, including the club’s founder.

These people live lives so disconnected from the reality normal Americans face every day that silly, stupid and racist things they spew make sense, they seem normal. The rich while liberals on Martha’s Vineyard can hug the 50 illegal aliens and pretend they’re heroes for doing so, but only when they’re being shipped off the island in a hurry. Do you think any MV residents could name one of those illegal aliens? Will they help them find word or housing on the mainland? They’ve got the money and connections help every single one of them, but all they really want is the story.

The hypocrisy and racism of the left is a marvel – that they can “condemn” it while engaging in it puts them up there with history’s greatest bovine excrement artists. But never lose sight of the reality that that is exactly what they are, all of them.

Derek Hunter is the host of a free daily podcast (subscribe!), host of a daily nationally syndicated radio show, and author of the book, Outrage, INC., which exposes how liberals use fear and hatred to manipulate the masses, and host of the weekly “Week in F*cking Review” podcast where the news is spoken about the way it deserves to be. Follow him on Twitter at @DerekAHunter.