Derek Hunter
|
Posted: Sep 02, 2021 12:01 AM
Share   Tweet
The opinions expressed by columnists are their own and do not necessarily represent the views of Townhall.com. 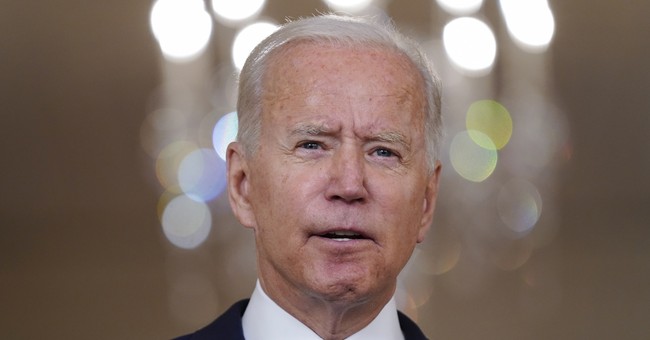 Joe Biden’s son Beau is dead. Did you know that? His first wife also died, as did his infant daughter, back in the 1970s. Have you heard that story? If you’ve been alive in the last 50 years and have at least one good ear, the odds of you hearing about Biden’s loss are higher than the odds of an American being successfully evacuated from Afghanistan after Joe abandoned you there. I’d never tell anyone how to grieve, but Joe Biden doesn’t grieve so much as exploit the deaths that touched his life, and it’s pretty gross.

There is no doubt that Joe Biden has suffered loss in his life. Losing your wife and infant daughter in a car accident would be devastating for anyone, no one denies that. And the sting of that loss won’t go away, even after almost 50 years. So you can’t really blame him for it still being an emotional subject for him. But he has since remarried and it has been almost 50 years, you’d think he’d stop talking about it.

There’s a fine line behind grieving and exploiting the sympathy that grief elicits. Joe Biden has always lived on the exploitation side of that line.

Throughout his Senate career, and in his previous presidential runs, his wife’s death played a major role in his campaign narrative. The story “evolved” over time, with Joe implying the driver of the other car involved in the accident was drunk and at fault. Neither was true, which makes the exploitation all the more gross.

Losing your wife and daughter is horribly sad, it doesn’t need embellishment. But Joe’s life is full of so many lies he simply can’t help himself.

When his son Beau died in 2015, Joe was again devastated. Ever since that moment, he has been using Beau’s death to elicit sympathy and to try to connect with others over their grief. Anyone who’s met Joe and talked about grief has heard about Beau. But it’s not always appropriate.

When Biden’s incompetence led to the murder of 13 American soldiers, Joe reportedly couldn’t stop talking about his own loss from 6 years earlier. As sad as I’m sure Joe Biden still is over Beau’s death, it had no similarities to the deaths of those soldiers.

Beau Biden was 46, twice the average age of the soldiers lost, and died of brain cancer, not a terrorist attack. The Biden family had time to say goodbye, none of the families of the 13 did. Joe Biden has no idea what it’s like to lose a child under those circumstances, but he simply can’t help himself.

Whereas Joe used to use his late wife and daughter to elicit sympathy from people, he now mixes in Beau. With Beau, it appears the loss is more raw – he was, after all the favorite child. If you wonder why Hunter Biden is so screwed up, look no further than Beau.

It’s not that Beau did anything, it’s that Joe clearly favored Beau – he was, after all, named Joseph Robinette Biden III. Beau was the one to carry on the family legacy, Hunter was just the bagman. Beau got the attention, adoration, and advice. When Beau died, Hunter left his own wife to take up with his brother’s widow in what appears to outsiders as an attempt to assume his life, his place in the family and his father’s heart.

It didn’t work. Hunter isn’t Beau and could never be. He spiraled deeper into drugs and other women, cheating on his sister-in-law with who knows how many people and fathering at least 1 illegitimate child. Thankfully, Joe didn’t mention that to families of the fallen heroes.

Joe shouldn’t have mentioned any of it to any of them. The event wasn’t about him, it was about those who were lost. But Joe can’t make anything not about him. He a lifelong narcissist, and vapid on top of it. Only that combination of characteristics can make a person so oblivious that they make a somber event like the returning of remains to the United States about them.

The President of the United States has a history of exploiting his personal loss for personal gain, it just backfired this time. Decorum and grief is likely the only thing that stopped one or more of these families from chewing out or even taking a swing at Biden. You’d think someone would tell him to knock it off, that it’s gross to use tragedy that way, but you’d be wrong. You’d also think a man almost 80 years wouldn’t need to be told that, which is an indication of just how stupid he really is.