Derek Hunter
|
Posted: Jul 27, 2021 12:01 AM
Share   Tweet
The opinions expressed by columnists are their own and do not necessarily represent the views of Townhall.com. 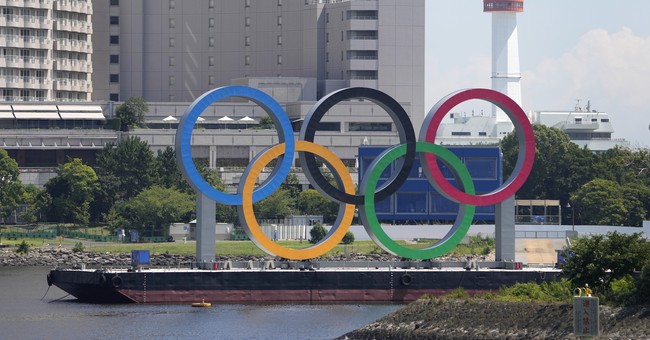 I’ve never been the biggest fan of the Olympics. Sure, there are some events I do enjoy – a lot of the track and field events, gymnastics, swimming – but just about the only thing I’m less interested in than the summer Olympics is the winter Olympics (with the exception of hockey). Still, I paid attention and watched…in the past. This year holds no interest for me.

It’s not because I’ve lost interest in the events I used to enjoy, nor is it that I’m disinterested in the weird events late night Olympics coverage offers. And it’s not that I don’t have the national pride I used to have, it’s that the athletes don’t.

I know that’s not true for all athletes, or even most, but one skunk ruins an entire garden party. And there will be a lot of skunks at this Olympics.

I don’t want to watch because I know there will be a woke-off between many of the medal winners, a secondary contest to be the most obnoxious left-wing d-bag who gets the most media attention. With NBC broadcasting the games, there really couldn’t be any other way.

The first person to raise a fist, take a knee, or turn their back on the flag during a medal ceremony will become an obsession for NBC, then the rest of the media. Then it’s game on as the rest of the media scrambles to book that person too. After that, every little social justice warrior wannabe in the games will start protesting, trying to outdo whatever was done before.

Since winning a medal is too rare, and there’s far too much attention and money in making a spectacle of themselves in the name of some leftist cause, the protests will begin to infiltrate the games themselves, not just the ceremonies. Everything will become the pregame of women’s soccer, which is why I’m actively hoping they lose another game and don’t make the medal round.

I don’t like rooting against my country’s team, nor do I revel in actively avoiding watching as much as possible. I’d much rather have casual indifference than the passionate indifference currently ruling my viewing habits. But this is the world the left has created, one in which everything is political because politics has been made into everything.

I feel badly for the Olympians who simply want to represent our country and do their best, those who compete in sports where no sponsor dollars will ever make it to. They are the ones being hurt long term, and they are the only ones who are seemingly keeping the Olympic Spirit alive. It’s always the normal people who suffer when liberals get their way.

So why would I watch that? Why would anyone watch that? It’s the professionalization of the college campus, and NBC is excited to broadcast it to the world. I sure as hell don’t want to watch that.

That NBC is getting horrible ratings from the start is a great feeling, at least to me. The opening ceremony got the lowest TV ratings in 33 years, and I’d bet dollars to donuts it’s for the very reason I’ve laid out here.

That this could hurt NBC and its parent company, the equally despicable Comcast, is an added bonus. The fortune they laid out for the broadcast rights not coming back, having to refund some planned outlays or advertisers pulling their spots because the network isn’t meeting their performance guarantees would be hilarious and glorious.

I still want the United States to win, and I’ll catch highlights online and even a couple of events on TV, but I will make a point of none of it. I won’t search to see when events I’m interested in are on or make any attempt to see them live. I could not care less.

Liberals, who started with this garbage long before the Olympics began, have been waiting for this moment since last year. That extra anticipation caused by the pandemic delay has only made things worse. I don’t want to watch, and I hope each and every one of those athletes who’ve promised to “speak out” lose. I don’t care what their cause is, I couldn’t give less of a damn what they care about, if they can’t rise to the occasion and put country first, and not be left-wing jackals for 5 minutes in their miserable lives, I hope they lose and never get the chance in the first place.