Derek Hunter
|
Posted: Jun 15, 2021 12:01 AM
Share   Tweet
The opinions expressed by columnists are their own and do not necessarily represent the views of Townhall.com. 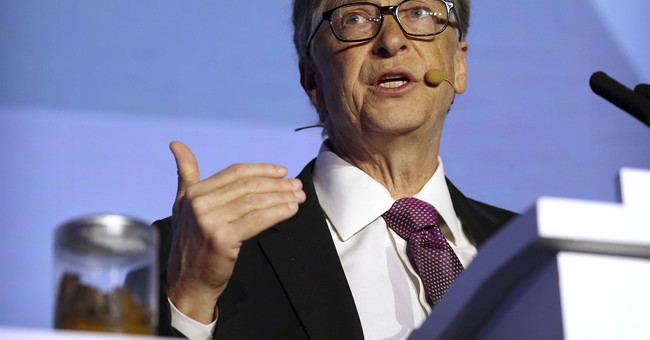 “A fool and his money are soon parted,” as the saying goes. But sometimes a fool has so much money that there’s nothing they can do to be parted from all of it, which frees those people up to be recurring fools forever.

Bill Gates is one such example. Yes, he created Microsoft, and depending on when and how often you’ve seen the “blue screen of death” and what word it cost you, you may or may not think he’s an idiot. But there’s no discounting his success. He earned his fortune. Now that fortune is causing him endless humiliation.

When you thought about Bill Gates before this year you probably thought a lot of things…none of which were “ladies man.” Yet, as Bill goes through a divorce from his wife Melinda, someone most people in an office pool would have pegged as the only woman he’d ever kissed, we’re finding out that little Billy was quite the player.

Gates is someone who, without question, caught the eye of the ladies with his wallet. It wasn’t the slightly Moe-like bowl-cut hairdo or the endless parade of sweaters with collars popping out the neck-hole, nor was it his suave demeanor, or his uninformed declarations about COVID or demands about global warming, it was the billions. Nothing wrong with that, I guess, but there is something wrong with stepping up your philandering after you get married.

Story after story has come out since the divorce was announced about how Bill would sneak off for rendezvous with various women or come on to women in the office, leading to credible speculation that a “me too” scenarios led to his departure from the company he founded.

How hard is it to not be a jerk? Did the money make him an idiot, or did it just empower him to be what he always was? It’s hard to say since there’s little chance the opportunity to be a womanizer would have presented itself to him without the money.

He picked the wrong woman to cheat on, that’s for sure. Since the announcement that their marriage was over, Bill has been on the business end of one long public relations nightmare. He had this woman here, pressured that woman there, and hung out with noted pedophile Jeffrey Epstein thinking it would help him win a Nobel Peace Prize are but a few of the blows his once “I’m just a nerd” reputation has taken. All the money in the world can’t make you a good person.

But idiots who earned a fortune aren’t the only idiots with money, a lot of idiots inherit their money. James Murdoch is one such example. You can’t go a week without a story about how Jimmy looks the gift horse of his birth in the mouth.

His father, Rupert Murdoch, created a media empire that includes Fox News and the Wall Street Journal. The accomplishments of James include being the lucky sperm that cracked the egg, and they end there. With a string of failed business ventures under his belt, his birth and father’s actions netted him $2 billion. And James has been attacking his father ever since.

James Murdoch is a big lefty, marrying another big lefty in his wife Kathryn. Together, comforted by the golden parachute of a fortune they didn’t earn, James set out to make Oedipus look well-adjusted.

With the fortune his family gave him, James is funding left-wing attacks on his father’s businesses – he got his, what does he care?

I saw Ann Coulter tweet a CNBC report this week that James “invested” $100 million in left-wing group he founded to influence the 2020 election on behalf of Democrats. Calling it an “investment” is a weird word choice since investments generally generate a return, not a tax dodge. But everything the younger Murdochs do is framed as magnanimous because they’re on the same team as the media covering them.

James and his wife have teamed up with left-wing groups to damage his family and the conservatism that enables them to live a life of leisure for years. While decrying Fox News as disinformation, they cut checks to disinformation outlets like Courier Newsroom, which the Washington Times described as a group that “disguises Democratic Party talking points and Democratic candidates’ press releases as news reports.”

The lesser Murdochs, naturally, teamed up with another ungrateful offspring, Prince Harry, on a board assembled by the liberal Aspen Institute to fight “misinformation and disinformation,” according to CNN. It will undoubtedly be yet another Democrat attack on Fox. This isn’t biting the hand that feeds you, it’s eating the whole arm.

I suppose there’s an argument that a board focused entirely on fighting disinformation should have documented funders of disinformation since they would know how it works. But if you ask me, the Aspen Institute completely discredits itself by having Kathryn Murdoch involved, on top of taking her money (which is likely why she’s on the board), when she and her husband have poured millions into lying to Americans and literally creating fake news. The comparison of James Murdoch to Oedipus may be unfair…to Oedipus.

Bill Gates and James Murdoch are two examples of people, presumably with intelligence and education, who are essentially morons who have money. One apparently used that money to fulfill their personal perversions, the other to humiliate and harm people they claim to care about. You can decide which is which. But if either wish to unburden themselves of the money that corrupted them, I’ll happily make the sacrifice and take it off their hands.