Derek Hunter
|
Posted: Apr 08, 2021 12:01 AM
Share   Tweet
The opinions expressed by columnists are their own and do not necessarily represent the views of Townhall.com. 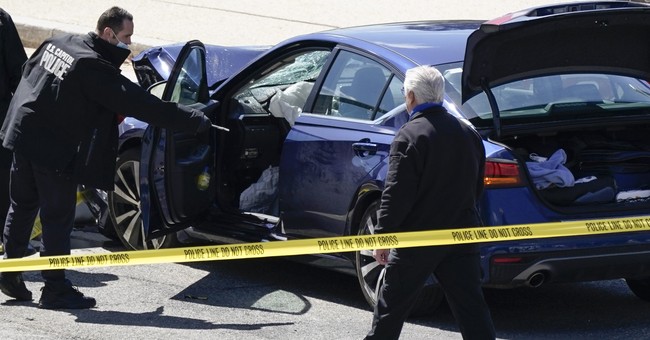 If you want to see how the liberal mind works look no further than the media. It’s not just how they cover what they cover, it’s what they cover in the first place. Sometimes, they go all in without regard to facts, and sometimes they rush to a story only to find it is not what they’d thought it to be, hoped it to be, and run away just as quickly. When they run away, the story disappears – like it never even happened.

The latest examples of these types of stories involve shootings and an attack at the U.S. Capitol.

When eight people were murdered by a monster in Atlanta, the left became excited at the implications – a white guy had murdered six Asian women, it had to be a hate crime. If you noticed the difference between eight people being murdered and the media-hyped “Six Asian women” being the left’s obsession, you’re not alone.

Who were these other two people and why were they treated like the Professor and Mary Ann were in the first two seasons of the Gilligan’s Island theme song – not really acknowledged? It’s rather difficult to find out because the media set the narrative that these killings were expressly an anti-Asian hate crime and they didn’t fit that narrative of “white supremacy” being the root of all evil. That was their story and they were sticking to it, no matter what any evidence or reality may contradict it.

A few days later, another monster killed 10 people in Boulder, Colorado. Images of the killer being taken into custody by police without his shirt perked up liberals' hopes that another “white supremacist” had attacked. The template was ready, the narrative was set and ready to go. Many so-called journalists jumped the gun, declaring that “another white guy” had gone on a killing spree.

But a funny thing happened on the way to ratings gold and agenda success – the man arrested was a Syrian immigrant and a Muslim. Not being a white guy, the story was no longer useful to the left and it disappeared from the news. A mass shooting with two more victims than Atlanta, which was still driving the news cycle at the time, and suddenly it was gone. The races of the victims and the perp were wrong, so those lives did not matter.

Then there was a mass shooting in California, 4 victims this time including a 4-year-old boy. It had all the hallmarks of a story the media would love, but it never got traction. If you weren’t watching the news that night or morning, the odds are high that you’ve never even heard of the tragedy. The victims and the suspect were Hispanic and this is of no use to Democrats, therefore it is of no interest to the media. Once the breaking aspect of the story gave way to the demographic reality, it was gone. Even the murder of a child didn’t matter. They’ve ignored multiple children being murdered in Chicago, why would one in California matter?

Last weekend, more than 30 people were shot and seven killed in Chicago, the left’s radar didn’t even blip.

On Friday, they thought they’d had another pile of gold, this time back at the U.S. Capitol. A lunatic ran over two police officers, killing one and severely injuring another. Was it another “insurrection?” The media snapped into action, ready to highlight the “threat from Trump supporters.”

The suspect this time was a black guy, a leftist and follower of the Nation of Islam, a real hate group. Chyron writers at CNN and MSNBC went back to sleep, able to nurse the cramps in their hands from pre-typing out variations of “White Supremacist Attacks Capitol Again” several thousand times. It’s the cross “journalists” must bear, I guess.

It has all the ingredients of a story the left loves – a white police officer, a black man, ties to a hate group, and murder – they were just put together in the wrong order. And that order couldn’t be hanged, so after the initial live coverage, the story was gone by the next day.

You’ve likely seen those ads for Servpro where the pipes bursts in a home or office, everything freezes, then people in Servpro gear come in and put everything back together before life resumes “like it never even happened.” That’s how the left is when a story, no matter how tragic or newsworthy, does not fit their narrative or advance the liberal agenda: it’s Keyser Söze – poof, it’s gone.

Tells you something, doesn’t it?