A Monopoly On Stupid

Derek Hunter
|
Posted: Feb 25, 2021 12:01 AM
Share   Tweet
The opinions expressed by columnists are their own and do not necessarily represent the views of Townhall.com. 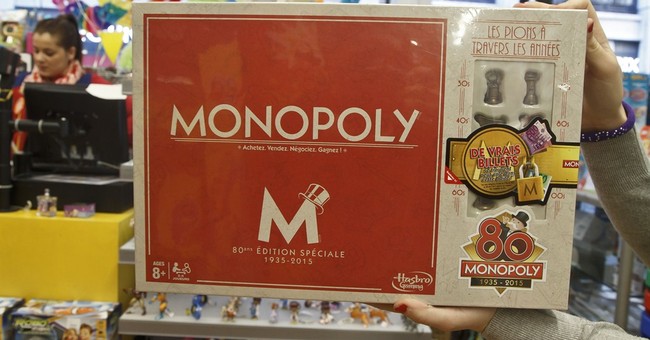 If you thought 2020 was the dumbest year on record (and I’m as guilty of that as anyone), 2021 just demanded we hold its beer…

Less than two months in and the level of stupid coming from the left has been ramped up to 11. If there were an Olympic event for insanity, Democrats would hold a tighter grip on all three spots on the podium than they hold on power over the cities their policies have singlehandedly destroyed. It’s an amazing feat of manipulation, if nothing else.

As far as bringing people together goes, that was never the Democrats' objective. Their goal was to get just enough support to seize power. Holding power, no matter how tenuously, is always the left's objective. Exercising it is almost an afterthought, though they do it with vigor.

To get power, leftists have employed an endless string of demonization and lies. Unbound by reality and unhindered by being held accountable, the Democratic Party has set out to make as many people as possible into victims. Of what doesn’t matter, the important thing was to make them feel oppressed, somehow, by someone.

Why this works on so many is a combination of many things. First, some people desire to be absolved of responsibility for their failures. A simple fact of life is that everyone’s life is the culmination of consequences of their decisions. If you’ve made good decisions, studied and worked hard, the odds of you having a good life are very high. Conversely, if you spent more time skipping school, getting high and stealing beers from someone’s garage than studying or working hard, you probably won’t find yourself being a titan of industry anytime soon. Most people function somewhere in between, quite happily.

The same goes for morally good choices. There’s a fine line between living a good life and living a moral one. Democrats want to change what both of those mean, and have deployed every tool at their disposal to build a wall between them.

That can only be done through distraction. If people think, the plan falls apart. If people are paying attention to stupid “outrages of the moment,” they can begin to live from one outrage to another.

There’s an adrenaline rush in outrage; like bungee jumping or a feeding frenzy, once you start it is hard to stop.

Democrats are always at the ready to be outraged, but the flames of outrage burn so hot that they must always be fed.

That’s how you get old tweets “resurfacing,” as they say, and stories of long dead celebrities saying things that would cause college campuses to burn today but didn’t register as a blip at the time. There is an entire industry that exists to find things to be upset about. In the COVID economy, it’s one of the few growth industries.

But even growth industries run into supply problems.

In addition to “real” outrages dug up by dutiful losers with gender or race studies degrees, they’ve begun to manufacture outrages too. It makes sense – if your supply chain is unreliable, create your own supply chain.

The latest, and one of the dumbest, outrages the manufacturing wing of the industry has churned out is over the board game Monopoly.

“Monopoly's standard board originally based all its cheapest properties in black neighborhoods - inspired by the racial segregation in 1930s Atlantic City,” screamed a headline from the UK Daily Mail.

The story, if you feel like wasting time you’ll never get back reading, is as dumb as you can imagine it is. The game, using street names from Atlantic City, is, according to the author of the essay the story is based on, “as in so much of the rest of the United States, that hierarchy reflects a bitter legacy of racism and residential segregation.”

Did you know that? No. Does it matter? No. Dig deep enough into the history of anything and, if it is your objective, you can find something to pretend to be upset about. Monopoly is hated not because of the property names, but because it teaches capitalism. But Democrats can’t come out and just say that, so you get this.

People who are offended by things they weren’t upset by before, simply because they learned some obscure and irrelevant part of its backstory, are the bread and butter of the Democratic Party now. Outrage is the coin of the realm in stupidity politics, and Democrats have a solid monopoly on that.