Derek Hunter
|
Posted: Jan 14, 2021 12:01 AM
Share   Tweet
The opinions expressed by columnists are their own and do not necessarily represent the views of Townhall.com. 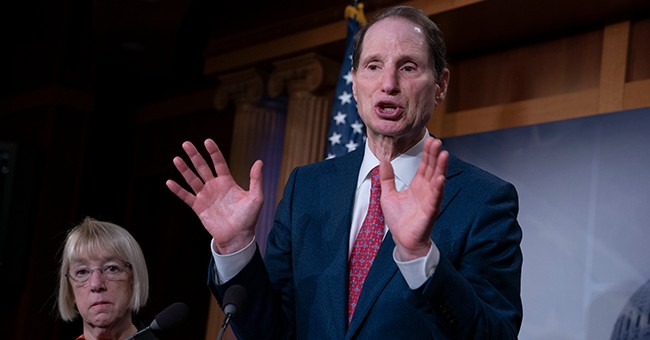 No group of people exploits an event like Democrats do. When there is a tragedy, you can bet there will be a Democrat standing in the rubble, the smoldering mess, or even on a pile of bodies promising they, and only they, have the solution that will prevent something like whatever it was from happening again. They never, ever let a good crisis go to waste.

Their “solution” is a lie, of course, and they never address how the policies they’ve advanced in the past led to whatever the current outrage they’re attempting to exploit is. But it usually is the case (see any mass shooting and the failure or refusal of liberal prosecutors to vigorously enforce existing gun laws).

In the aftermath of the riot at the U.S. Capitol last week, Democrats are multitasking – simultaneously clutching their pearls about how they’ve never seen such a violent mob (they’ve apparently had their masks over their eyes for the last 10 months as their BLM-ANTIFA brownshirts terrorized Americans from coast to coast) and move forward with a “the Reichstag has burned” push to solidify their grip on power.

Miraculously, as is always the case, the “solutions” the left are proposing dovetail perfectly with agenda items they’ve been pushing for years. It’s like how the “climate change crisis” has evolved from global cooling from the '50s through the '70s into global warming in the '80s and '90s, then when the “facts” changed again, became the generic “climate change.” No matter what the “problem” was, the solution remained the same – more government power, stronger regulatory control, higher taxes, etc. When the “problem” literally turned 180 degrees, the liberal solution remained the exact same.

They are honest in the same way ANTIFA opposes literal fascism.

Another example of this opportunism is Oregon Democrat Senator Ron Wyden.

As his state’s largest city remains under a constant state of riot for coming up on a year, Wyden sees an opening for cramming through liberal objectives designed to keep Democrats in power indefinitely.

“Democrats must use our majorities in Congress to pass reforms that will defend our democracy from the forces that supported, incited and fueled the riots…” Wyden wrote for the left-wing NBC News web property ironically branded “think.” Again, he wasn’t talking about the sustained attacks on Portland’s Mayor who, despite sucking up to BLM-ANTIFA so hard his nickname is “Dyson,” he was talking about last Wednesday and finished that sentence with, “which means making it easier for every American to vote.”

How hard do people think it is to vote? Unless you are homebound for health reasons, you pretty much have to be in the immediate aftermath of suffering a closed head injury to be unable to do it. But that’s not enough for the left, they want more. Permanent mail-in balloting, because going to polls is too hard. Ballot harvesting, because putting a ballot in a mailbox, even the one attached to your house, the one you retrieved your ballot from, is a bridge too far. The only thing Democrats don’t want to do is pass a law empowering them to fill out the ballots for people, though that can’t be that far off (be on alert for these people to start arguing that ink in pens contributes to climate change, or something equally stupid).

Not done with the opportunism, Wyden moves on to calling for statehood for Washington, D.C.

He writes, “there is no longer any excuse for blocking statehood and full representation in Congress for the District of Columbia.” Why? Because why not? Never let a good crisis go to waste. He continues, “The same goes for the American citizens in Puerto Rico,” because of course. When going in for the kill, REALLY go in for the kill.

Wyden claims he’s doing this for the good of Oregonians. “Denying its (D.C.) residents their rightful representation in Congress diminishes the rights and political power of my 4 million constituents in Oregon,” he asserts without even attempting to explain how, though it’s clearly because not having 4 more liberal Senators prevents him from imposing his will on the millions of Americans who don’t want it.

Then comes a left-wing favorite, “it's also a deeply shameful thing that the more than 700,000 Americans living in Washington, D.C., are forced into a lower class of citizenship.” For the record, no one is forced to live in D.C., and the idea that the residents who choose to live there don’t have a say in national politics is laughable.

What isn’t laughable is how, the second they saw an opening, these fascists pounced. It’s what they do; it’s who they are. They never let a good crisis go to waste, even if they have to create the crisis to make it happen. The arsonists are running the Reichstag.

Why the Media Is About to Run Away From the Texas Synagogue Hostage Story
Townhall
BUSTED: Many of the '270 doctors' who signed a letter urging Spotify to censor Joe Rogan 'are not medical doctors'
Twitchy
Biden Remarks Today on TX Hostage Situation Leave out Some Important Info
Redstate
Family Fights for Ivermectin for Dying Loved One, Courts Say 'No'
PJ Media