Democrats and the 'Speak Truth to Power' Lie

Derek Hunter
|
Posted: Dec 07, 2020 12:01 AM
Share   Tweet
The opinions expressed by columnists are their own and do not necessarily represent the views of Townhall.com. 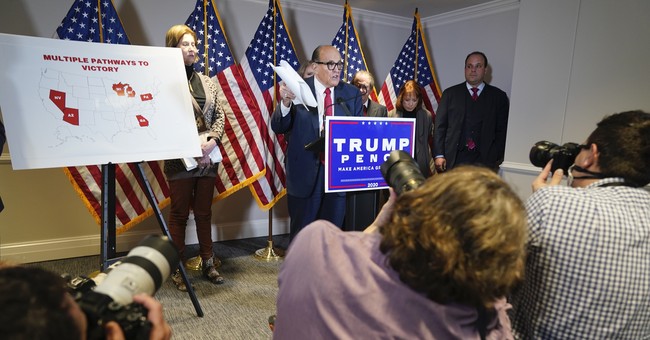 Everyone is the hero in their own story, so it makes sense that Democrats truly believe they’re doing good when they do evil. It’s easier to sleep at night when you convince yourself the depraved and corrupt things you do are in the name of something good or just. But no matter how hard they lie to themselves, their lies never become true.

Democrats, particularly those with press credentials, love to talk about how they “speak truth to power.” It’s a meaningless phrase in general, but it’s even more meaningless when it exits their oral cavities.

Leftists wouldn’t know truth if their lives depended on it. Lucky for them, their lives do not depend on truth or speaking it. Their livelihoods depend, almost exclusively, on the opposite. They don’t confront power; they either smear it or suck up to it.

When a Republican is in their crosshairs, Democrats fire everything at their targets. Truth or lie makes no difference -- if they think it will hurt them, it’s game on. But when a Democrat controls the levers of power, they suddenly shift to throne-sniffing mode and attack anyone who dares to challenge the “acceptable,” narrative-approved thought.

Such was the case in Michigan last week. A woman named Melissa Carone dared to testify to what she saw in the shady confines of the vote counting room in Detroit on election night. Since Democrats insist any challenge to their narrative that the election was as pure as the wind-driven snow must be met by either ignoring them completely, as is the case with most firsthand accounts, or total and complete destruction when the witness is too effective or memorable.

Melissa fell into the latter category for the left. Because she pushed back against condescending and unbelieving questioning with justified attitude, elected officials and their army of flying monkeys have been attacking her.

Those were just a sample. No actual journalism occurred as no outlet bothered to check her story, just mock it. Then came the personal attacks.

Because Carone dared not slink away, learn her place, and shut the hell up, an example had to be made. If people didn’t see what happens to those who challenge the liberal narrative, someone might do it again; more people may come forward to do what they think is right. Democrats can’t have that. So, naturally, Saturday Night Live mocked her. They weren’t alone.

Kimmel, as has become the fashion for shows that used to be about joke set-ups and punchlines to amuse an audience but have become political speeches with applause lines, decided a guy making millions of dollars per year should attack a woman for telling the public what she saw. Perhaps he was trying to make up for his racist indiscretions in the past, or maybe the years of insulation that celebrity and money brings caused him to forget what being a decent human being to people not of your economic class was like. Or maybe he’s just a pile of human garbage emboldened by groupthink.

Whatever the case, whatever is wrong with these people, it is wrong and they aren’t capable of being right. And they sure as hell aren’t speaking truth to power.

These self-righteous, arrogant drones doing the bidding of a political movement are decidedly not speaking truth to power. They are speaking the truth of the powerful to anyone who dare challenge their will. They are despicable in every way a human being can be.

They will go on, continue on their path unencumbered by consequences for their slavish loyalty to the Democratic Party and safe in the knowledge that they will never face the same examination and smearing they dish out so freely to others. They are cowards and frauds, but they’ll sleep soundly tonight because, in their circle, they are still the heroes in the own stories.