Derek Hunter
|
Posted: Nov 17, 2020 12:01 AM
Share   Tweet
The opinions expressed by columnists are their own and do not necessarily represent the views of Townhall.com. 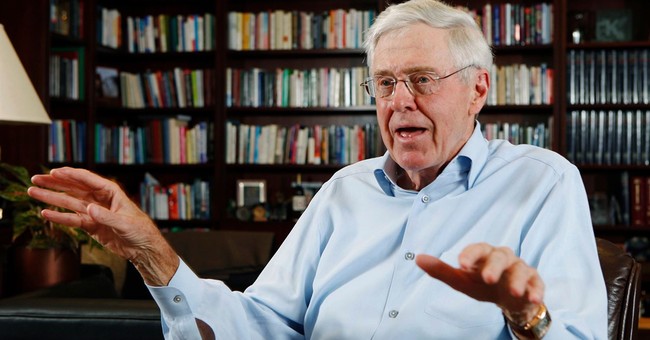 The idea of complaining about the people funding the conservative movement seems a bit odd, after all, they cut a lot of big checks. They fund think tanks and websites, the very heart of the conservative movement, and those organizations have done some great work in the past. The only problem is it’s not the past anymore, and the old model no longer works. The people funding the left have out-flanked the right, and it is long past time for the right to catch up.

Yes, it was a good year for Republican House candidates, and depending on how Georgia goes, it could be a good year in the Senate too. It was also a good year for those of us who despise what the media has become – an appendage of the Democrat Party (you can pick whichever one you prefer to think of for it) – as Americans hold those left-wing, narcissistic blowhards in lower esteem than ever before. But there is a lot more work that needs to be done.

Take a look at any major Democrat-controlled city and what do you see? Aside from the crime and unemployment, or perhaps behind it, are local elected officials actively engaging in thwarting the law.

Leftist billionaires, led by George Soros, have bankrolled local political races, particularly for district attorneys and prosecutors, to fundamentally change the country locally. Winning Washington is great, but serious changes, and real damage, are happening across the country locally.

What good does passing laws to protect people do if the people charged with enforcing them refuse to do so? All the legislative victories in the world add up to nothing if they’re ignored.

The difference between Democrat and Republicans is Democrats play the long con – they’re out to get your bank account, your IRA, the title to your car, the deed to your house, they are working the system to get everything. Republicans play the short con – they’re happy if they get your watch, and even if they don’t they don’t really care because they already have a watch.

Election day is not a finish line, it’s a checkpoint. Democrats have understood this my entire life, Republicans never have. Republicans win or lose elections and go about their life like they’re relieved the “stressful part” is over. Elected officials breathe a sigh of relief and donors go about their lives, waiting for the next fight to start in a couple years.

That needs to change, and change quickly, if conservatives are going to stand a fighting chance of protecting what makes American great.

Thinking has to be different. Democrats are entrenched in places that matter and they have to be chased out. As much attention needs to be paid to this micro level of politics and has been paid to the macro-DC world.

If conservatives are really looking for a way into these blue strongholds, this is the way. Thinking strategically, in places where these offices are partisan, and a Republican candidate is a non-starter, a conservative Democrat is better than a progressive one – think of them as the gateway drug to the concept of conservatism. Is it going to cost money? Yes. Will a lot of it be spent in losing races? You bet. But no first swing of an axe ever knocks down a tree, and you’ll never change anything by not trying.

On that front, there are stories that CNN is possibly on the market. How amazing would it be if one or a group of these rich donors cutting checks to name fellowships and rooms after themselves at think tanks with endowments so big they could choke a horse, decided to put some money toward something that wasn’t a vanity project, something that could have more impact on the country, and the world, than all the recycled ideas in papers rewritten by “experts” at those think tanks and read by no one ever, could.

Imagine CNN doing news again, actual news. Imagine removing that tool from the left’s bag and placing it firmly on the side of honesty, something foreign to it currently. You don’t need to reinvent the wheel, as some are proposing to do, when there’s a wheel factory for sale. It just needs to be retooled.

There are countless options and opportunities available for those with the means and the will. Unfortunately, it takes both, and so few people have either, let alone both. Billionaire philanthropist and businessman Charles Koch, someone who could do some of these things, is now lamenting his “partisanship,” which is wildly unproductive in pursuit of Koch’s lifelong political goals.

The right needs people uninterested in separating their business and political interests; people willing to meld the two. Preaching to the choir has its place, and small investments in vanity websites that otherwise wouldn’t exist are all well and good, but they aren’t anything close to difference-makers. There are markets and customers being underserved or ignored that are hungry for alternatives. In other words, there is money to be made while fighting for the cause. Of course, they’d have to be willing to step up, and step out front, to actually fight for the cause – put their name on it and take the slings and arrows that come with it.

There is no “bad publicity” in getting a room no one but other rich people will visit in a think tank headquarters named after you, but there’s also no difference to be made there. Wealthy conservatives have to step up now, if they really want to have a legacy that matters, and take the fight to the left on the only field that matters – the public square.