Not All Heroes Wear Capes. Some Wield Scissors.

Derek Hunter
|
Posted: May 07, 2020 12:01 AM
Share   Tweet
The opinions expressed by columnists are their own and do not necessarily represent the views of Townhall.com. 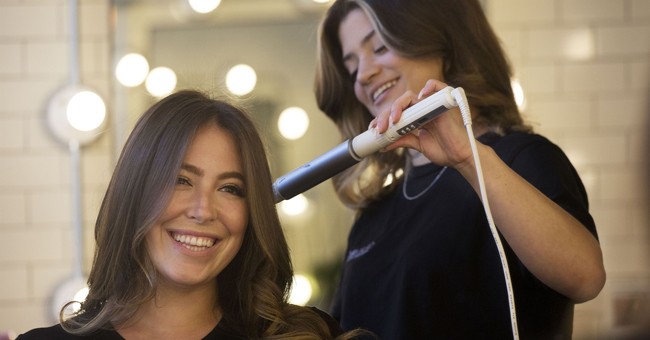 There are countless heroes in the coronavirus pandemic, but most of them won’t face jail time. Some, however, will. And one in particular has gotten herself seven days and a $7,000 fine for the unforgivable crime of trying to feed her family by opening her perfectly legal business: Shelley Luther.

Ms. Luther lives in Dallas, Texas, and is owner of Salon A La Mode, a state-determined “non-essential business.” Missing from the state’s declaration was a notification of Luther’s essential bills that they should take a break or any magic clause that food should magically appear in the cupboards and refrigerators of Luther and her employees so their families could eat.

With the reality of hunger and financial destitution opening their front door, Luther defied the state’s command and offered her services to those who wanted them. She did not rent a van and snatch people off the streets, cutting their hair against their will while emptying their wallets at gunpoint. Her customers, like her employees showing up to work, were voluntary. For this “crime,” she was arrested.

The judge in her case, someone named Eric Moyé, lectured Luther as “selfish” after finding her guilty of acting like a free person. If she’d just apologize for “defiling” a court order – she’d ripped up a cease and desist order at a protest – and defying the will of public officials who, at every opportunity, call themselves “public servants” who claim to “work for you,” she would avoid jail and only be subjected to further financial hardship through a stiff fine. (Who knew cease and desist orders were sacred? Must we frame them, or something?)

After telling the destitute Luther she should have hired a lawyer and gone through the long, expensive process of legal appeals if she wanted to operate her legal business to avoid losing her business, home, and starving her children, the salon owner told the judge to go to hell.

OK, she didn’t use those words. She was much more diplomatic in the face of tyranny. But tyranny doesn’t respect diplomacy. “Judge, I would like to say that I have much respect for this court and laws. And that I’ve never been in this position before, and it’s not someplace that I wanna be,” Luther said when given the time to apologize. “But I have to disagree with you, sir, when you say that I’m selfish because feeding my kids is not selfish. I have hairstylists that are going hungry because they’d rather feed their kids. So, sir, if you think the law is more important than kids getting fed, then please go ahead with your decision, but I am not going to shut the salon.”

With that, at a time when liberals are calling for the release of prisoners across the country in the name of “compassion” in the face of the pandemic, Moyé, a Democrat, sent her immediately to jail.

Luther chose to not “bend the knee” to authority and sparked outrage around the country.

Texas Senator Ted Cruz said, “7 days in jail for cutting hair?? This is NUTS. And government officials don’t get to order citizens to apologize to them for daring to earn a living.”

The state’s Attorney General followed suit, saying, “I find it outrageous and out of touch that during this national pandemic, a judge, in a county that actually released hardened criminals for fear of contracting COVID-19, would jail a mother for operating her hair salon in an attempt to put food on her family’s table.” He called it “a political stunt” and called for her immediate release.”

By the time you read this, she may be free. Maybe Republican Governor Greg Abbott has expressed his disgust over the case as well. I don’t know the pardon laws in Texas, they appear dependent on the recommendation of the Board of Pardons and Paroles, but if an expedited emergency meeting can’t be convened in this case, what’s the point? A statement is nice, action is better.

Whatever happens in the Luther case, she has drawn a line on which others will stand, and for that we all owe her. A GoFundMe account has been established, raising hundreds of thousands of dollars already.

No matter how much money is ultimately raised, Luther is owed a debt of gratitude well beyond it.

In 1968, had you asked people if they’d like to walk on the moon, they almost universally would have said yes. If, a year later, those same people, after answering affirmatively, were given the opportunity to strap themselves to the top of a 36 story tall rocket filled with explosives to do just that, the number of takers would dwindled to near zero. But three men – Neil Armstrong, Buzz Aldrin, and Michael Collins – did just that. They did what seemed impossible, and was impossibly dangerous, because it had to be done. Someone had to be first.

Shelley Luther did the same thing, albeit terrestrially. She could have chosen not to strap herself onto that rocket, it would have been much easier to apologize. But she knew she was right and so, to steal a phrase from the left: she persisted. She won’t be celebrated by the liberal intelligentsia the way a blathering Elizabeth Warren was for breaking Senate rules and not caring, quite the opposite, but what she did was exponentially more important for the cause of liberty. She joins the truck drivers, grocery store clerks, and food delivery drivers who don’t get the attention of accolades medical heroes do, but who’ve been just as important in keeping the country and spirit of America alive during the pandemic. Not all heroes wear capes, but maybe they should (and we should tip them like they do).