The Collapse of the Oil Industry

Derek Hunter
|
Posted: Apr 23, 2020 12:01 AM
Share   Tweet
The opinions expressed by columnists are their own and do not necessarily represent the views of Townhall.com. 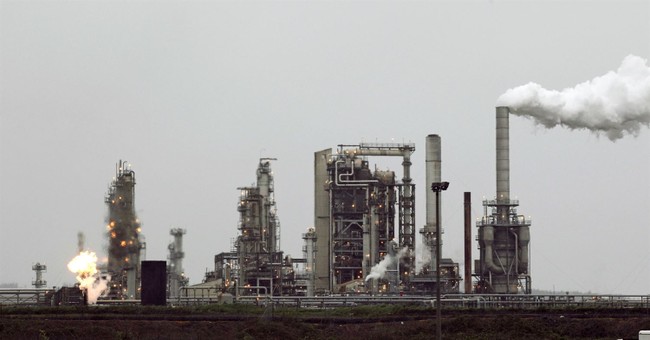 The collapse of the price of a barrel of oil this week was something to see. It was cheaper for producers to pay people to take it away than it was to store it themselves, as capacity had been reached. They were offering almost $40 per barrel to take the oil. Made me wish I had an Olympic sized swimming pool I could fill up for a rainy day.

While people watched dumbfounded at how this could happen, people working in the energy industry were terrified - what would this mean for the jobs, millions of them?

The answer isn’t good. Which is probably why progressives like Congresswoman Alexandria Ocasio-Cortez celebrated the collapse by declaring, “You absolutely love to see it.” Someone on her staff with an IQ larger than their shoe size must’ve contacted her immediately upon seeing it because she deleted her comment very quickly, but she had expressed the glee of the left accurately.

Normal Americans were left confused - how could they be paying people to take oil? Oil is valuable, how could it have a negative price attached to it?

It’s simple market principles, the kind the left normally hates. Demand is way, way down. The people drilling, largely in the Middle East and Russia, didn’t stop or cut drilling when demand dropped because few people are driving. There was no one to buy the oil by the end of that monthly cycle, so it started to accumulate. When there’s a glut of oil there are only a couple of options - sell it cheaper or hold on to it for a while.

Well, in the time of quarantines and stay at home orders, no one needs more gas right now, or oil for any of its other applications. That leaves holding it as the only option. But the cupboard is full, there is no mass storage facility space available for the same reason no one wants to buy it. The price of building more storage costs more than “selling” it at minus $40 per barrel, so they offered it up with a cash kickback.

This won’t mean you can drive up to your local gas station and get paid $2 a gallon to take gas off their hands, but it will lower the price of a gallon for us. At a time when so many people are out of work, seeing the pay and/or hours cut, and everything teetering on the edge, that’s not necessarily a bad thing for consumers.

It is, however, a bad thing for the oil industry. While thoughts of huge oil companies taking a bath for a while might fill your heart with a little joy, most of the workers in that industry aren’t wearing top hats and lighting cigars with $100 bills. They’re normal Americans working as hard as anyone else to make ends meet. And they’re kind of screwed right now.

The cost to bring a barrel of oil out of the ground is higher than you can sell it for, which means everyone from the big barons to the farmer with one pump on their property has shut them down. The people who work for them have no work to do. The people who depend on them to support their businesses aren’t getting that support, etc. No one domino falls in the woods inconsequentially - it’s part of a chain of events.

The United States had just become a net oil exporter, meaning after decades of lip service about how we shouldn’t be dependent upon foreign oil, we actually weren’t. But we will be again because demand will return once the lockdown ends. The question is will we have a domestic oil industry left when it does?

Sure, the big companies will survive, but what about the small ones or the refineries? That’s a tougher proposition.

As you would imagine, every step of the oil industry is regulated beyond belief. Some of it is good - mostly safety-related - but others are simply liberal meddling. One example of that is the “renewable fuel standards," which is basically requiring the mixing of gasoline with ethanol as a nod to “big corn” and leftists environmentalists who think it’s somehow better for the planet. It’s not. It just adds costs at a time when no one needs added costs to anything. Those renewable fuel standards could easily be waived, which would be a great place to start to keep that industry alive.

Ending the renewable fuel standard would end the practice of the federal government forcing refiners to engage in trading renewable fuel credits, usually ethanol-based corn. Corn that not only could be better used to feed people in a time of crisis but the basis for a type of fuel best known to damage car engines. The federal government created something called RINs, renewable identification numbers, which makes refiners buy and sell credits so they don’t have to blend ethanol themselves, yet another bastardization of the market.

If you wanted to destroy the oil industry, you’d do pretty much what the AOCs of the world want - make it artificially expensive to drill and add to the cost of refining gasoline at a time when people need a break.

The free market can work, and will work, when governments stop trying to damage each other, when nonsensical regulations are repealed, and leftists just get out of its way. A low price at the pump isn’t good for anyone if there’s nothing to pump.