The Progressive Quest For Scalps

Derek Hunter
|
Posted: Nov 14, 2019 12:01 AM
Share   Tweet
The opinions expressed by columnists are their own and do not necessarily represent the views of Townhall.com. 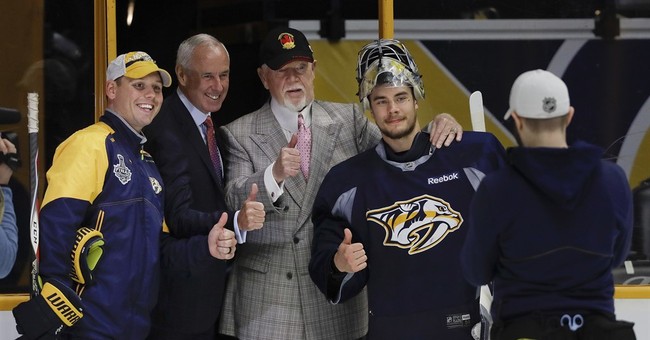 If you aren’t Canadian or didn’t grow up near the border with access to the CBC on your TV and have hockey as a part of your childhood, the name Don Cherry likely doesn’t mean much, if anything, to you. But what just happened to him should matter to you, because it could happen to you. And if you happen to not be a radical leftist seeking to destroy anyone who disagrees with you on anything, it likely will happen to you.

Cherry, a former NHL coach and host of “Coach’s Corner” on the “Hockey Night in Canada,” found himself, once again, in the crosshairs of the fascistic left for his words. And for those word, Cherry was fired after 37 years.

So what were the words? Did he drop an n-bomb or some other racial slur of some sort? No. Was it something uniquely Canadian, like criticizing Labatt beer? Nope.

Don Cherry’s unforgiveable sin was loving his country too much and referring to immigrants who don’t appreciate the sacrifice of members of the Canadian military as “you people.”

Yep, that’s it. Two words, two common words used together countless times per day by millions upon millions of people to refer to any group of people were too much for the sensibilities of the northern command of the “Progressive Outrage Mob.”

In Canada, they celebrate their version of Memorial Day on our Veterans Day, November 11 and call it Remembrance Day. To mark the occasion, Canadians wear a poppy flower pin, sold on street corners and intersections leading up to the observance. The proceeds go to benefit veterans, as you would expect.

Cherry noticed that he’s seen fewer and fewer poppy pins in recent years, particularly in cities with large populations of newly minted Canadians. On Saturday night’s show, he remarked on that fact while introducing a years-old segment on celebrating Canadian soldiers who made the ultimate sacrifice, from a Canadian cemetery in Europe, and why the poppy pins matter.

In the introduction, which The Washington Post described as “divisive comments about immigrants,” Cherry said, “You people love – you, that come here, whatever it is – you love our way of life, you love our milk and honey. At least you could pay a couple of bucks for poppies or something like that. These guys paid for your way of life, that you enjoy in Canada, these guys paid the biggest price.” (Watch the whole segment for yourself here.)

That was enough, he was done. He was also 100 percent correct in his anger.

His anger wasn’t simply directed toward immigrants with no understanding or appreciation for the sacrifice of soldiers, it’s true about young natural born Canadians too. They grew up in a world with no threat of fascism or communism, and no real understanding of those concepts because of the work and sacrifice of the men and women in the military. We have the same problem in this country.

Some imbecilic professors with little memory of the '80s, let alone anything that happened before it, believe these systems of communal state ownership of their citizenry can only lead to Utopia, not slavery, and with nothing to compare it to, uneducated minds start to believe it. When someone points out that people should be appreciative of the people who’ve sacrificed so much so they can be unshowered morons, or maybe be respectful of the country that took you in after you fled your homeland, suddenly the outrage mob descends.

Liberals get angry when you view as curious the glee with which so many illegal aliens march up Mexico with their young kids while displaying the flag of the country they are walking 2000 miles to get away from with the pride of a kid who won MVP of their baseball team.

And others, like Cherry, simply want to tell people to honor those who came before them, who created these lands people flee to rather than simply flee.

But that was too much for the Canadian left. After just reelecting a prime minister with a deep personal history of wearing blackface that is only rivaled by Al Jolson, they snapped to action and demanded Cherry’s scalp.

They Sportsnet, the company that owns “Hockey Night in Canada,” folded like a prostitute with an Olympic gold in gymnastics. “Don’s discriminatory comments are offensive and they do not represent our values and what we stand for as a network,” said Bart Yabsley, Sportsnet president.

At least now Canadians know their top sports network has no use for veterans or those who support them, but also think the people who don’t appreciate them are aces!

In many ways, Sportsnet is just like ESPN – left-wing puppets and propagandists that occasionally, if only accidentally so their pundits can use the bathroom and snort a couple lines of coke, show sports.

Cherry’s scalp is Canadian, and proudly so. But how many proud American scalps does the left have dangling on their trophy, er, participation ribbon wall? Curt Schilling, as just one example, comes to mind. Take it outside sports and the wall is covered with people from all walks of life, many you’ve never heard of and never will. All were simply expressing thoughts deemed impure by the liberal mob. While you may not care that Don Cherry’s was the latest, if they gain real political power again, sooner or later it will be all of ours.