PETA Is Beyond Parody

Derek Hunter
|
Posted: May 16, 2019 12:01 AM
Share   Tweet
The opinions expressed by columnists are their own and do not necessarily represent the views of Townhall.com. 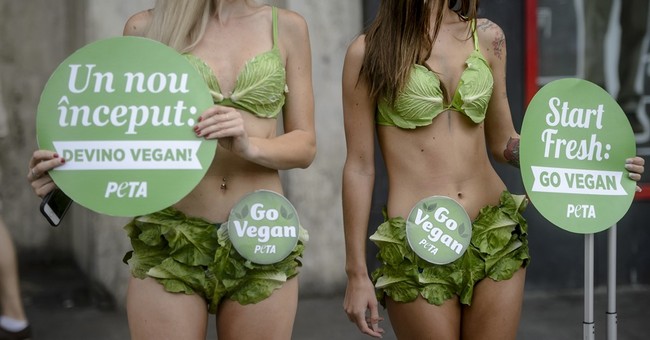 Let me just say from the start that I love animals, and I’m not just talking about the delicious ones. I drive my wife a little nuts by feeding the birds, squirrels, deer, rabbits, and pretty much anything else I know that wanders through our yard. But our kids love watching them and so do I. Plus, we have a bunch on the inside of the house, too. That being said, I have a lot of issues with so-called animal rights groups.

I’m as disgusted as anyone with animal abuse. People who’d torture any sentient creature should have the same Hell imposed on them. But far too often groups that present themselves as fighting to make sure animals are not abused end up being abusers themselves.

No group is more hypocritical on this front than PETA – People for the Ethical Treatment of Animals. They’re very good at fundraising and getting themselves publicity, but when it comes to actually being honest people doing good work…not so much.

In 2013, the New York Times reported the group was killing “an average of about 2,000 dogs and cats each year at its animal shelter” in Virginia. And that’s just one shelter. As far as pet adoptions at those shelters goes, the Times reports they only adopted out “19 cats and dogs in 2012 and 24 in 2011.” They’re quick to kill, seemingly not so big on the care and feeding part of taking care of pets.

Two years later, the Washington Post found PETA in Virginia was still euthanizing 80 percent of the animals they “rescued.” Makes you wonder what they were rescued from.

Occasionally PETA does expose animal abuse, and good on them for that. But it seems like a large percentage of their energy, time, and money is focused on stunts to aid in their fundraising and keep their name out there to give the impression that they’re fighting abuse. When I worked on Capitol Hill, the one day every year people talked about PETA was when they had hot models wearing lettuce bikinis giving away vegetarian hot dogs to Hill staff at lunch. Hill staffers will eat anything that’s free, especially when given to them by scantily clad models.

While the tradition of free hot dogs served by models has, sadly, ended, PETA’s tradition of recklessness has apparently not.

I saw the other day that PETA is being sued by PetSmart for spying. Yes, you read that right – spying.

According to lawsuits filed against the organization and their former employee, PetSmart alleges Jenna Jordan, the former employee, secretly recorded audio and video for PETA while posing as a PetSmart employee. They were apparently hoping to find animal abuse, since PetSmart is one of the few remaining pet stores where people can adopt pets.

If PETA really wants to stamp out animal abuse they should start with the nearest reflective surface. In 2017, the group euthanized 1809 cats and dogs while only adopting out 44.

Meanwhile, PETA rails against the consumption of meat and has joined in with the PC word police to end “phrases that trivialize cruelty to animals.” Last December they tweeted, “Just as it became unacceptable to use racist, homophobic, or ableist language, phrases that trivialize cruelty to animals will vanish as more people begin to appreciate animals for who they are and start ‘bringing home the bagels’ instead of the bacon.”

At first, I thought it was a parody account, but they’ve become impossible to parody.

On the birthday of the late “Crocodile Hunter” Steve Irwin in January, PETA took the opportunity to condemn the man by tweeting he “was killed while harassing a ray.” Irwin died when his heart was pierced by a stingray while filming a dive for his TV show. The group also said Irwin “wrestled wild animals who were minding their own business.” Like they’d just stepped away from their desk for a smoke when this crazy guy jumped on their back.

Irwin did more to raise awareness and respect for animals than a rabid left-wing activist group spending its time secretly recording pet store managers, “putting down” cats and dogs, and lecturing people about their diets ever could.

There’s a lot of horrible people out there who abuse animals, and they should all be condemned. That includes people who exploit their abuse to make money and get attention.