Joe Biden Is In For A Rude A-WOKEning

Derek Hunter
|
Posted: Apr 28, 2019 12:01 AM
Share   Tweet
The opinions expressed by columnists are their own and do not necessarily represent the views of Townhall.com. 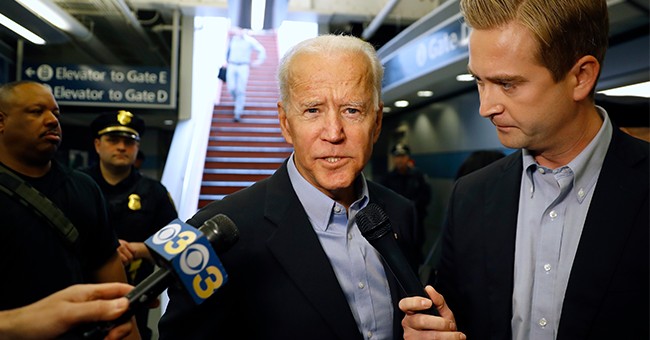 Joe Biden, the 76-year-old former Vice President and long-term Democratic Senator from Delaware, finally threw his hat into the ring for his party’s nomination for president. As the frontrunner in nearly every poll, in normal times Biden would have a relatively easy path to the nomination. But these are not normal times, and Joe Biden is not a normal candidate.

“I think I probably have a much higher IQ than you do, I suspect,” responded to question about his academic credentials during his first White House bid in 1987. “I went to law school on a full academic scholarship, the only one in my class to have a full academic scholarship. In the first year in law school I decided I didn’t want to be in law school and ended up in the bottom two-thirds in my class, then I decided I wanted to stay, went back to law school and, in fact, ended up in the top half of my class. I won the International Moot Court Competition, I was the ‘Outstanding Student’ in the Political Science department at the end of my year. I graduated with three degrees from undergraduate school and 165 credits, only needed 123 credits, and I’d be delighted to sit down and compare my IQ to yours, if you’d like, frankly.”

As you can see, Joe Biden has always had the fire in his belly for politics. The only problem with the above response is none of it was true.

Aside from the face that there’s fuzzy math involved in saying you moved from the bottom two-thirds of you class to the top half (there’s a lot of overlap there for both to be true simultaneously), Joe Biden graduated 76th out of 85 people in his law school class. Unless he didn’t attend his last year, the only time he was likely near the top half of his class was the first day of his first year.

Moreover, he didn’t get an academic scholarship, he received a needs-based scholarship and grants. He only has two undergraduate degrees, not three. And he was only nominated for the “Outstanding Student” award. He didn’t win it, and that’s only allegedly because the “correction” he issued later was based on his obviously faulty memory of his own life.

The only part of his rant that may be true is the unverified claim that he’d won the International Moot Court competition. The New York Times reported back in 1987 that Biden told them “he had won such a competition, with a partner, in Kingston, Ontario, on Dec. 12, 1967.” How he remembered the exact date while forgetting seemingly everything else about his life remains a mystery.

How did he explain these lies back then? His excuse is one for the books. “I exaggerate when I'm angry,” Biden told the Times. Hilariously, he concluded that statement with, ''but I've never gone around telling people things that aren't true about me.”

Joe Biden has always had a strange, tenuous grasp on reality. He’s known for gaffes and goofs. It’s part of his “charm,” actually. When he was just the Senator from Delaware or a powerless second-fiddle and couldn’t do much harm, who cared? Now that there is even the remote possibility he could be the Democratic Party’s nominee for president it is downright terrifying.

But his past lies and gaffes are nothing compared to what awaits Joe as he wades into the waters of the modern Democratic Party. Even though he was a star in it just a couple of years ago, the left’s hatred for Donald Trump and chased it into the arms of radicals and lunatics. It is not the party of his two previous failed runs, this one is more “woke” than anything he’s remotely used to, anything anyone is used to. And they aren’t willing to forgive, forget, or accept any impurities of thought.

It’s not just “Sniffy Joe’s” handsy and hair smelling history, Biden’s whole past is littered with statements that would have him run off any college campus…were he not a Democrat. His legislative record is from a time when Democrats supported bills that were tough on crime, opposed the legalization of drugs, opposed illegal immigration, were against reparations for slavery, and seemed to not hold the country in so much contempt. He’s going to have to run by denouncing and denying everything he’s ever been.

Joe Biden has demonstrated clearly that he has no problem doing that, it’s just a question of whether or not the “woke” crowd that demands “purity of past” is willing to accept it. Does their hatred of Donald Trump override their hatred of everything else? Either way, it’ll be fun to watch.