Maybe It’s Time To Stop Trying To Get Along

Derek Hunter
|
Posted: Oct 28, 2018 12:01 AM
Share   Tweet
The opinions expressed by columnists are their own and do not necessarily represent the views of Townhall.com. 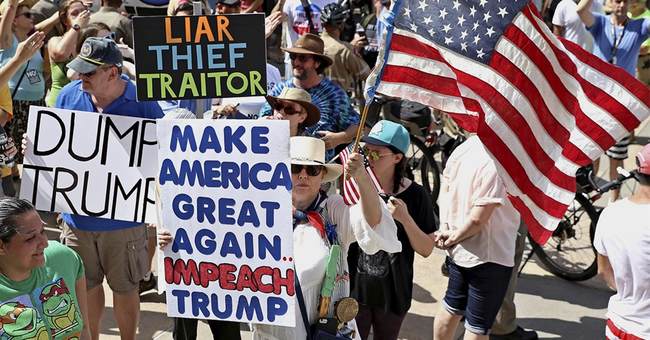 There was a time when Americans from both political parties managed to get along. I know that seems crazy, like some sort of fever dream, but it’s true. More than that, on some occasions, politicians came together as one and stood up for our country. Now we don’t even speak the same language anymore.

The night of September 11, 2001, on the steps of the U.S. Capitol, the Members of Congress who were in DC gathered together with one purpose, to show the world we would not cower in the face of those horrible attacks. Spontaneously, those Democrats and Republicans sang “God Bless America,” with the lack of self-consciousness we have when we sing in the shower, and pride in this country.

Soon after that moment, the politics started again and the divide we’d always had turned into a chasm. And it’s only grown.

I could assign blame, there’s plenty to go around, but pointing out how the left saw mileage to be gained by embracing and cultivating hatred of George W. Bush isn’t particularly productive. How we got here matters less than how we get out of here. Only, I don’t know if we can get out of here.

When the dud-bombs started showing up this week, President Trump unequivocally condemned the act and called for unity against all political violence. It was the right thing to do and he did it without any qualifications. Democrats rejected the sentiment, choosing to try to score political points ahead of the midterms. The media rejected it too, blaming the President for the actions of a madman.

It was the exact opposite of everything these very same people did last year when a liberal activist tried to murder as many Republicans as he could on a baseball field in Virginia. Nancy Pelosi bristled at the suggestion of Democrats saying the GOP health care proposal would kill tens of thousands of people every year might lead someone to think they had a moral obligation to act to prevent it. “How dare they?” she squawked at the suggestion.

But Republicans didn’t dare, for the most part. They quickly moved on, though not as fast as the media did, which forgot the story after three days – before Congressman Steve Scalise was off life support. Now it’s like it never happened.

The President immediately did what he should have, and the left demanded he do more. Donald Trump doesn’t owe any of these charlatans in politics or the media an apology for the actions of someone else. After two years of calling him a racist (something they missed while they were inviting him to their parties for 30 years before he became a Republican), homophobe (though he was for gay marriage long before they were), Hitler, and everything else you can imagine. They’ve called him an idiot and a mastermind, a puppet and dictator, an empty suit and a totalitarian. You name it, they’ve called him all sides of it depending upon what their narrative required at the moment.

Still, he called for unity, for everyone to come together and condemn this terrorism. No one reached back. Who’s to blame for that? It’s certainly not the person reaching out.

CNN spent all day blaming the President’s words for someone else’s actions and milking their victimhood while one of their top personalities publicly swore they weren’t (apparently no one at CNN watches CNN, and who could blame them). MSNBC, seeming angry they weren’t targeted, joined in the chorus. Rachel Maddow, who the GOP baseball shooter listed as his favorite TV host, said the President has “violent extremist groups” doing his bidding. She might as well have been holding up a sign with “Someone go finish the job!” written in the blood and dirt from the field that day. Naturally, their token “conservatives” got on the bandwagon too.

Democrat after Democrat formed a conga line of fake outrage knowing the pearl-clutching statement of Congressman Backbencher would be gobbled up by a media desperate to share more attacks on the only man calling for unity.

Democrats once cared enough about the country to put partisanship aside, at least temporarily. Since 2001 wasn’t an election year, those few weeks were easier. Now they can taste power again, and nothing, not even basic decency, is going to stand in their way, even for a day.

Democrats aren’t going to change unless voters reject them again, and then only maybe. And personalities employed by alleged news organizations to play the roles of journalists aren’t going to take off their blue uniforms and attempt objectivity anytime soon either. So what’s the point?

These leftists have refused to denounce the liberal mob’s tactics for years, as Republicans and average citizens are harassed from coast to coast. Now they demand the President, Republicans, and Fox News admit complicity in the actions of a madman? To Hell with that.

Just last week, Hillary Clinton said Democrats don’t need to engage in civility unless they regain power. Maybe the time has come to stop trying to get along and just focus on making sure they never do.

To defeat the liberal mob you first have to understand how it was created and how it is manipulated and controlled. Order a copy of Derek’s book, “Outrage, INC.: How the Liberal Mob Ruined Science, Journalism, and Hollywood,” to understand how the political left manipulates unsuspecting Americans to the point that they’d believe their lies and act on them. And subscribe to Derek’s daily podcast, it’s free! Together they’ll help stay sane and just might help you deprogram friends and family who’ve fallen prey to the mob mentality.