Derek Hunter
|
Posted: Sep 30, 2018 12:01 AM
Share   Tweet
The opinions expressed by columnists are their own and do not necessarily represent the views of Townhall.com. 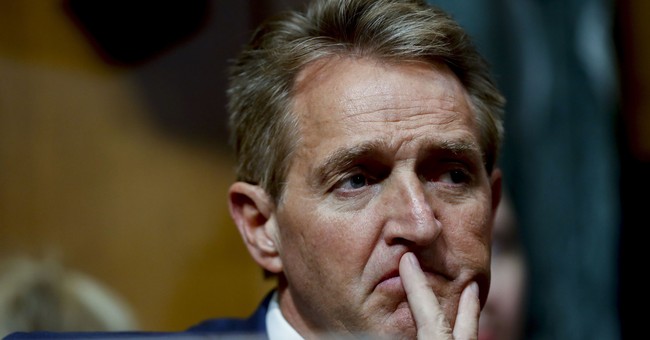 You don’t know me, though I’ve met both Collins and Murkowski when I worked for the late Montana Senator Conrad Burns. But my life, and the lives of everyone in this country, are hanging on what you do next in the confirmation battle over Brett Kavanaugh.

I call it a battle rather than a process because it is a battle, a fight, even a war. I know each of you think you’re doing your best to stave off that war, but you’re only making it more likely.

Senator Flake, you were confronted on national television by two activists, both claiming to be rape survivors. Maria Gallagher and Ana Maria Archila gained national fame over the video of that confrontation, and both say they’ve never spoken about their experiences before. The testimony of Christine Blasey Ford gave them the strength, they said, to come forward. But they haven’t, at least as far as I’ve seen so far.

These women have an opportunity to tell their stories and hopefully get justice. I hope they do. And I hope journalists who’ve granted them hero status, follow up and air their stories so other women won’t risk being victimized by their attackers.

But they’re also dedicated liberal activists. There is no investigation, no piece of evidence (or lack thereof) that will change their opposition to Kavanaugh. If Dr. Ford herself held a press conference saying she’d had more memories recovered and she now realizes she was wrong about him, Archia and Gallagher will not then encourage you to vote your consciences.

The same people who’ve been threatening all of you and your staffs are the same people you’re hoping to placate. There is no process that ends with anything other than what they want that will quell this angry mob.

I know you don’t want to believe that, you’d prefer to believe there is some magical path forward that will please everyone. That doesn’t exist.

Hours after Senator Flake caused yet another FBI background check of Judge Kavanaugh, the official Twitter account the Women’s March tweeted out his picture with the caption, “Rape Apologist.”

In fact, they called every single one of your colleagues on the Judiciary Committee a “Rape Apologist,” with each getting their own tweet and captioned photo. Do you believe your fellow Republican Senators are rape apologists? How do you find middle ground with that? What, short of total and complete capitulation, will be enough for them?

What will be enough for people who verbally attacked Senator Ted Cruz and his wife in a restaurant? Or Secretary Kristjen Neilson? Or anyone else with an (R) as their political affiliation who’s been on the receiving end of the liberal mob’s rage?

One liberal activist from a prominent left-wing organization said, after the elevator confrontation, “Tell me again why we shouldn't confront Republicans where they eat, where they sleep, and where they work until they stop being complicit in the destruction of our democracy.”

Is that what you want, more of your colleagues confronted “where they eat, where they sleep, where they work”? If this tactic is rewarded, there will be no reason for more people to not use this tactic, on both sides. After all, Democrats eat, sleep, and work too.

Some of these liberal activists published the home addresses and phone numbers of Senators Lindsey Graham, Mike Lee, and Orrin Hatch this week with that very thought in mind. It was just last year that Congressman Steve Scalise was shot and nearly killed when one of these mob members set out to murder as many Republicans as possible on a baseball field over the health care debate. The left won that battle, yet the hate didn’t subside. Not even a little.

Nothing will ever be enough.

The Democrats’ playbook is to keep people in an emotional frenzy over everything to prevent rational thought. Have you heard widespread condemnation of Republicans being confronted in public by Democratic leaders? Passive, yes, but consistent rebuking of each event? No, you have not.

I wrote a book on this very subject. I’d send each of you copies, but I know how the Senate mail system works and how the radiation used to render any chemical or biological agents harmless destroys paper. But trust me, none of this is spontaneous, and none of this will end as long as there are people who stand in their way.

Brett Kavanaugh is not the monster they are portraying him as, any more than you are as they have and will continue to portray you to be. There is literally nothing to indicate there is truth in any of the allegation against him. People just don’t grow out of being monsters, it’s either in them or it’s not.

Unless everyone named by Dr. Ford was, under penalty of felony, lying to you and the press, the FBI will return quickly with the same statements you’ve already read. Outside of Dr. Ford, who can’t remember the only details of her story that would allow Judge Kavanaugh to clear his name – the where and when – there is no credible human being who can say he did anything inappropriate. No witnesses to an allegation at a crowded party at Yale, no memory from Dr. Ford’s friend who would have been abandoned by her at a party. If someone were abandoned at a party by their friend, leaving them the only female there, it would be remembered and it would be asked about the next time they saw each other. But that didn’t happen.

As for the outrageous gang rape claims, they’re so absurd on their face that they aren’t worth a second’s thought.

Thursday, you heard testimony from a woman who is being used by activists and politicians to obtain a political goal. Dr. Ford’s lawyers said she was afraid to fly, which was why the hearing wasn’t held sooner. Yet she testified that she is not afraid to fly. She testified she wished Senate investigators would have come to her privately. That was offered to her, repeatedly and publicly, but her team insisted on a public hearing. Someone is not telling the truth.

Activists wanted that hearing public, they needed that hearing public, no matter what Dr. Ford wanted. Her name and story were leaked, against her wishes, to start this process; and her team, suggested to her by Senator Feinstein, worked to make it happen. It was a ploy, used to delay, used to fundraise, and used to try to destroy a good man for the sin of existing wrong in the eyes of the political left. If you truly want to return some civility to our politics you need to make sure incivility doesn’t work, that is fails.

I’m a nobody and you have no reason to believe my words simply because I wrote them. However, you should believe everything you’ve seen, and everything you’re seeing.

The past 2 weeks have seen Democrats and activists demanding an “FBI investigation,” which you now have facilitated. Once they got it, they demanded it not have any limits is time or scope. Just as the previous week saw a demand to hear Dr. Ford, then once immediately agreed to, demands for delay for reasons she testified were not true.

All the while, Judge Kavanaugh, who immediately pledged to cooperate with this latest FBI investigation, was declared a rapist, something no one has even alleged, by politicians, pundits, and journalists. USA Today said this man who loves coaching his daughters in basketball “should stay off basketball courts for now when kids are around.”

There is nothing remotely resembling proof of anything alleged, yet these partisan guttersnipes don’t care, they want his head because they are terrified he reveres the Constitution. If it were not Brett Kavanaugh, these poison arrows would be sticking out someone else’s back. He’s not under attack for what he’s done, he’s under attack for what he believes.

We need to be better than this as a nation. We can be better than this, but only by defeating it. And you three are the only ones who can defeat it. If you want a legacy, let it be that you stood up, in the face of extreme hatred and smears that, only a few years ago, would have been unthinkable, and said “no more.”

The fate of the future of our politics and our country literally hangs on your votes. I implore each of you: do not leave my children a world where these tactics work. No legislation you’ve introduced, no vote you’ve ever cast is as important as standing up for decency and justice now.

Derek Hunter is a husband, father, and author of the book, “Outrage, INC.: How the Liberal Mob Ruined Science, Journalism, and Hollywood,” which examines the ways, both obvious and subtle, liberals use emotional manipulation to override rational thought and influence the American people.