Derek Hunter
|
Posted: Jul 05, 2018 12:01 AM
Share   Tweet
The opinions expressed by columnists are their own and do not necessarily represent the views of Townhall.com. 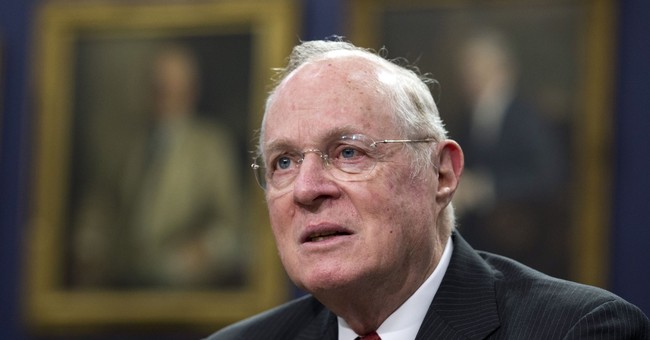 It’s as predictable as the sunrise; a certainty like death and taxes – Democrats vehemently oppose President Donald Trump’s Supreme Court nominee. Keep in mind, no nominee has been named yet, and won’t be until Monday, but it doesn’t matter; who it is will not matter, they freak out and oppose them.

We’ve been down this road before, and we’ll hopefully be down this road again (c’mon, Darth Vader Ginsberg, retirement is calling) – liberals whine and cry about how this or that nominee is “extreme” and therefore they can’t be confirmed. When your whole world is an angry mob worked up into a frenzy to the point that they’re shouting at government officials in public places, being a radical leftist seems normal.

When you celebrate an angry leftist “teacher” wearing a “Your Founding Fathers Owned Slaves” t-shirt on television because she read prepared talking points to the head of the Environmental Protection Agency in a restaurant while her husband filmed her, you aren’t associating or identifying with normal Americans. Forgive me if I have difficulty taking your political philosophy seriously if you willingly use your child as a political prop.

However, even though the Democratic Party is being bought out by socialists, they do still have a say in our government (at least for now). As such, and since you’re going to hear it anyway, I thought I’d give you a heads up on what you can expect to hear from these aspiring mini-Mussolinis after a nominee is named.

For purposes of inclusion (and mockery), and because we don’t yet know the gender of the person, I will show my bipartisan spirit by using the neutral pronoun “Xe.” (Don’t worry about how it’s pronounced, if anyone insists they know do yourself a favor and run away from them as quickly as possible.)

“Xe will make abortion illegal and send women to prison!” This has already started. Democrats live here because it keeps their base angry and afraid, which is all they have to offer this election season. If President Donald Trump nominated beloved liberal abortionist and likely America’s most prolific serial killer Kermit Gosnell to replace retiring Justice Anthony Kennedy they’d still make this claim. It’s Pavlovian.

Conservative justices tend to respect precedent, but that won’t matter. Nor will any testimony affirming as much. Democrats won’t believe anything the nominee says, which is kind of rich coming from the party that campaigns on appointing judges who will “overturn Citizens United” and other precedents they don’t like.

“Xe will be a rubber stamp for the Trump agenda!” Democrats will scream this because their base really believes this. Actually, their base is just used to it when a Democrat nominates a Supreme Court Justice because that’s what happens.

The tides are not as reliable as a liberal SCOTUS Justice siding with a liberal cause in their decisions from the bench. Conservatives, on the other hand, are saddled with judges who, generally speaking, adhere to the Constitution, even when it goes against our wishes. They don’t cite international or foreign law, they don’t project a subtext into the document because they’ve sworn an oath they “will support and defend the Constitution of the United States against all enemies, foreign and domestic,” and they mean it. Liberals, not so much.

“Xe is out of the mainstream of American society.” When your base is on-call 24/7 to “take to the streets” to march against whatever they’re told to hate and your elected official come primarily from wealthy coastal states, your grasp on what is “mainstream” might not be as strong as you think. If you haven’t been to a private event or party where anyone disagrees with you and the mere mention of the name Trump puts a look on everyone’s face like they just bit a lemon, your world is more insulated than you know.

“Xe is a racist/sexist/some kind of phobe.” This one will probably come up first, it’s the “security blanket” of the modern left. Even if the nominee is a woman or minority, Democrats can’t help themselves. It’s red meat to the base, and the angry mob is always hungry.

All of this should amount to nothing, if Republicans stick together. When you have squishy Republican Senators like we have not, that’s always a big “if.” But, should the caucus hold, and as long as President Trump doesn’t nominate a Harriet Meyers-type, we should find out the name of our next Supreme Court Justice Monday. It will likely lead to riots, it will certainly lead to protests and more angry outbursts. Considering only 32 percent of Democrats are “extremely proud” to be an American, liberals definitely won’t be happy, which means it will be a victory for the cause of liberty.

The angry mob is the Democrats’ election plan, they have nothing else. Keep people angry and afraid to prevent them from thinking, and try to scare the Hell out of everyone else. I detail how they do this, how they attempt to manipulate the masses and indoctrinate unsuspecting people in my new book, “Outrage, INC: How the Liberal Mob Ruined Science, Journalism, and Hollywood,” out now. And it’s 40 percent off, on sale for less than $17! Please order a copy today – you’ll laugh, you’ll learn, and most importantly you’ll be armed with the knowledge you need to defeat them.