Liberals Put The “F” In NFL

Derek Hunter
|
Posted: May 27, 2018 12:01 AM
Share   Tweet
The opinions expressed by columnists are their own and do not necessarily represent the views of Townhall.com. 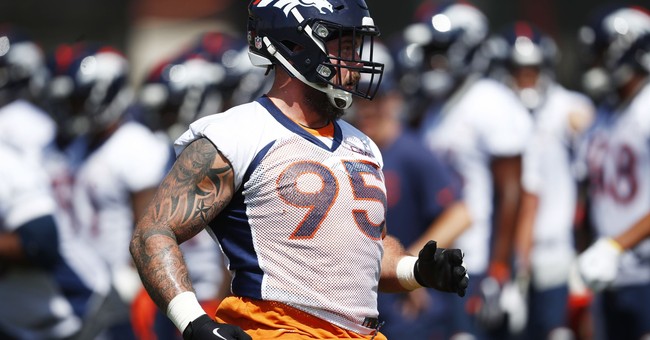 It’s not often you get to watch a major corporation publicly try to pull out of a self-inflicted nosedive, but that’s exactly what the National Football League attempted to do this week. The last two seasons have been a time of shrinking viewership for the league that “owns a day of the week,” as they saying goes, and that negatively impacts the bottom line. So the NFL came up with a solution to what they see as the problem.

Starting this season, the NFL will fine teams with players who don’t stand for the national anthem. Whether or not those teams fine the actual players who refuse to stand is up to them, but the team will also be penalized, which could cost some teams some games. If that isn’t enough to at least give activist players pause – harming their teammates – nothing will.

In a smart move, the league will not punish players who don’t go out on the field for the anthem, the fines only apply to players visible to the public as the song is sung. This offers a compromise to players who desperately need to be known for “doing something.”

Liberals were, naturally, outraged. That’s where they live these days. Their arguments varied, but the basics were the players have a right to protest and the league was simply caving to pressure brought by President Donald Trump and “right-wingers too dumb to realize what the players were actually protesting in the name of profit.”

I was asked to write the opposing view for USA Today on this subject. In that piece I wrote, “The idea that the NFL is only implementing its new national anthem policy because of falling ratings and public pressure is exactly how businesses work. No business exists to employ people; they exist to make as much money as possible.” Allowing employees to engage in “on the clock” activities that harm the business would be suicide.

The liberals did not care. The league is “punishing dissent,” they cried. No, the league is punishing insubordination that is harming the company they work for. In most businesses that would get you fired, and your firing would be absolutely justified.

“Fining teams whose players kneel during the anthem isn’t ‘punishing dissent,’ it’s the people who sign the front of the players’ sizable checks exerting the authority inherent in any employer/employee relationship,” I argued.

Having held more jobs in my life than anyone you likely know, more than 70, I know this relationship all too well. In one of the record stores I worked in as a kid I was required to wear a tie. It made no sense to me then (still really doesn’t), but it was corporate policy so I did it. It’s not as though I didn’t have a choice, I didn’t have to work there. I chose to work there, so I had to follow their rules.

“It’s not like we’re selling insurance,” I argued. But my boss didn’t care, his hands were tied. It was the policy. I didn’t own a tie, my father didn’t own a tie, and didn’t know how to tie a tie, so I wore sweaters, which was the only exception to the policy. But when I wore a V-neck sweater to work, the t-shirt clearly showed that didn’t have on a tie, I was sent home. I knew the rules, and I tried to test them. The company won because I worked for them. There were a lot of people willing to do my job, working in a record store was the “cool job” in the mall, but they were the only record store willing to hire me. I learned.

I was making minimum wage, not the millions of dollars NFL players rake in, and every penny I earned was the difference between being able to fill up my gas tank or go out with friends. In other words, I needed that job until I found another one. Players, if they’re so offended by the idea of having to act in accordance with professional standards while doing their jobs, presumably have a nice pile of money to fall back on. They are under no obligation to continue working under conditions they see as silencing their voices.

But I’d ask you this: how many NFL player-led protest marches have you seen during the off season, on any issue? It’s not like they couldn’t get media attention if they wanted it.

There may have been a few, some players may have attended other protests, but if this is something players, by and large, feel so strongly about, why did their involvement appear to end when the season did? If, as liberals say, the “protests” weren’t about the national anthem, but about something they feel strongly about, why do they only take place during the song during the season?

In this case, it was about the anthem. Liberals wanted something that would stand out, get attention; they wanted to shock. But, as I wrote in USA Today, “What the protesting players don’t seem to grasp is if you protest during something, your protest is viewed as being against that thing. If you protest during the national anthem, your protest will be seen as being disrespectful to the anthem. The method overrides the message.”

They alienated their audience, chased away customers. It didn’t hurt their bottom line, they have contracts, but it did hurt their employer’s bottom line. That’s why there are new rules.

Those rules may or may not stop the kneeling, but they’re unlikely to bring back the fans. At least not anytime soon. People took this personally, as it was intended to be.

And that’s the real problem the NFL is facing – football has been targeted by liberals for destruction.

Football is a violent, highly competitive sport – in other words, it’s masculine, which is why liberals despise it. No amount of penalties and fines are going to change that. Like so many of our institutions these days, the NFL, if you’ll excuse the expression, is being F-ed by the Ls.

Note: This problem in the NFL is one of the topics covered in my book, Outrage, INC: How the Liberal Mob Ruined Science, Journalism, and Hollywood. It’s in chapter 10, “Millionaire Victims.” The book comes out June 19th, preorder a copy today. You’ll like it, I swear.