The FCC Is On The Verge Of Doing Something Stupid

Derek Hunter
|
Posted: Jan 11, 2018 12:01 AM
Share   Tweet
The opinions expressed by columnists are their own and do not necessarily represent the views of Townhall.com. 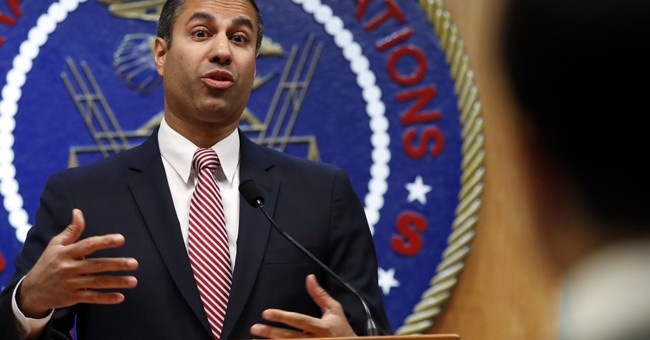 Admittedly, I am in need of a hobby. I do enjoy collecting baseball cards from the 1950s and older, but that gets pricey so I can’t indulge it often. That leaves the occasional movie when I’m not working, which isn’t often. As such, I find myself traveling down my career’s memory lane when looking for less obvious topics to write about. That leads to places most people would rightly run away from.

I like to keep up with the issues I used to study for a living. There’s always something happening in health policy, or education, or tech. And while those areas certainly aren’t the most exciting areas to dedicate your life to studying (there’s a reason I don't do those jobs anymore), they are profoundly important. As such, I try to take a dip back in the deeper end of those pools from time to time, just to see what’s going on.

That’s how I came across the story of the Federal Communications Commission (FCC) and a new development in rural broadband Internet access.

I can feel your eyes rolling into the backs of your heads right about now. It is true that this topic is not going to leave you rolling in the aisles or smiling with glee, but it’s every bit as important as the latest tweet from President Trump. In fact, it has the potential to impact Trump’s most ardent supporters negatively.

The Republican controlled FCC, at the request of large wireless Internet providers, is on the verge of strengthening their hold on rural Americans' access to the Internet. Some of you, right now, may be living in a rural part of the country, reading this over such a provider.

Current FCC rules allow for competition across the country, and the big guys don’t like that. A regulation put in place in 2015 ensured that all wireless providers had access to the part of the public airwaves spectrum dedicated to wireless Internet service. I told you, this wouldn’t be sexy, but it is important. Allow me to explain why.

If you live in an area like Chicago, either in or around, your options for Internet Service Providers (ISPs) are limited to the number of companies that want to get into the business. There are cell towers, fiber optic cables, phone lines, cable lines, etc., running all over the place in densely populated areas. That competition is good for consumers.

Then you go 300 miles to the west and you’re in the middle of nowhere, small town America. The odds that a big ISP is going to run fiber optic cables, or even cable television cables, to a town with 500-1000 people is slim to none. Multiply that by the thousands of small towns across the country and you begin to see the funnel of options narrow.

It’s not uncommon to find rural cities and towns where the only options for TV are local broadcast or satellite because cable companies could never recoup the infrastructure costs of wiring them. For Internet, the options are dial-up (yes, it still exists) DSL through the existing phone lines, or wireless, with wireless being the fastest option.

Now, there’s been a long-term push in Washington to get taxpayers to cover some or all of the cost of running cables to these areas, which would be a massive waste of money. Part of the trade-off of the slower paced rural lifestyle is you don’t get the latest, greatest of things. Internet is no different. But these areas do have cell service, and that cell service and those towers have been used to offer expensive Internet service.

While federal funding for rural development is a completely different issue than the “Citizens Broadband Radio Service” (CBRS) issue, they do relate because they show that federal policies fail. The federal government has spent more taxpayer dollars to fund the deployment of broadband to rural areas than I care to think about, yet it hasn’t happened. The private sector, as it always does, has found ways around the infrastructure shortcomings and are delivering these services. They’re doing it through small providers that serve these areas, areas where the big guys, without government subsidies, find the possible profit not worth their time. Their focus is densely populated urban areas; rural America is, at best, an afterthought.

Billions in tax dollars spent and next to nothing to show for it beyond the desire for more tax dollars. Weird how that works, isn’t it?

The 2015 rule specific to CBRS ensured equal access to that spectrum by ensuring everyone, including small rural businesses, could affordably compete to use it to deliver fixed broadband. That means competition and choices for those rural Americans, which keeps prices in check and service good. But the big guys don’t like competition, they never have. So they’re pressuring the FCC to change that rule and give them near-monopoly control over that slice of the spectrum for 10 years.

This isn’t because they want the lucrative rural market, to them that market is nothing. The spectrum is cut up into regions, large parts of the map that include massive rural areas but also contain major cities and their suburbs. Millions upon millions of customers in clusters are what they want to shut out competition from, the rural areas are simply collateral damage.

By changing this rule, the FCC would be limiting or killing options, competition, for tens of millions of people who live outside major urban areas. Those people vote overwhelmingly Republican and helped put Donald Trump in office. Changing this rule would not only be bad policy, it’d be electorally stupid. Plus, it would give ammunition to those arguing the government should fund Internet access, or at least the infrastructure for it, to these areas. It’s lose-lose.

Something being stupid has never stopped government from acting before, it’s a constant battle. But rarely has a government agency (even an independent one like the FCC) acted in a way that would directly do harm to the people who put the president in office. The rule change isn’t final, there’s a chance they wise up and leave it well enough alone. But when has government ever wised up?