Derek Hunter
|
Posted: Oct 08, 2017 12:01 AM
Share   Tweet
The opinions expressed by columnists are their own and do not necessarily represent the views of Townhall.com. 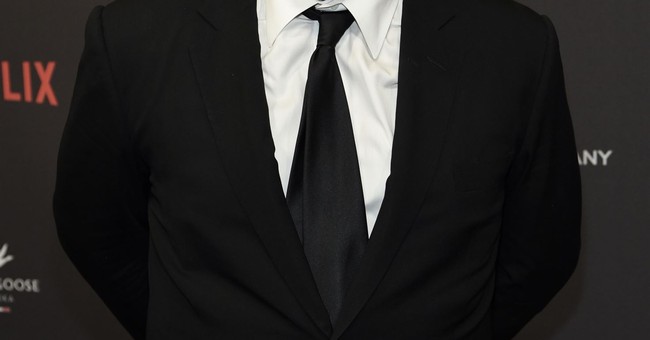 It is not a good time to be a Hollywood liberal or an elected Democrat. To paraphrase Jeremiah Wright, their chickens have come home to roost. Movie mogul and Democrat mega-donor Harvey Weinstein was exposed by none other than the bible of the political left as a misogynistic pervert, and his tentacles run deeply into both worlds.

The New York Times, of all places, published a blockbuster story of how Weinstein had been a serial sexual harasser of women in Hollywood for decades.

The paper reported it had “found previously undisclosed allegations against Mr. Weinstein stretching over nearly three decades, documented through interviews with current and former employees and film industry workers, as well as legal records, emails and internal documents from the businesses he has run.”

Further, the Times found “During that time, after being confronted with allegations including sexual harassment and unwanted physical contact, Mr. Weinstein has reached at least eight settlements with women, according to two company officials speaking on the condition of anonymity.”

It’s a story right out of a movie. But in the movie it would be a conservative business man or politician who was the monster, and that movie would be gleefully produced by Harvey Weinstein.

There are fewer in the world of the Hollywood elite more intertwined with the Democratic Party that Harvey Weinstein. Not only a donor to pretty much every Democrat you’ve heard of, he’s raised money for them from his wealthy friends. He’s also personal friends with most of them, including Bill and Hillary Clinton and Barack and Michelle Obama.

He’s praised them; they’ve praised him.

The same was true for Hollywood. Everyone kissed his ring as he was asking young women for favors.

And everyone knew it.

CNN’s Jake Tapper reported a friend of Weinstein’s, another producer in Hollywood, told him he was “shocked it’s taken so long for a Harvey Weinstein behavior expose. One of the most open secrets in Hollywood.”

Matt Atchity, the former editor in chief of Rotten Tomatoes, tweeted, “Harvey Weinstein accused of sexual harassment?  The only surprise here is that it’s just now coming to light.”

But how did it take so long to come to light? Weinstein lived in, and ruled over, a progressive political world of finger pointing; the world that backed every accuser of every Republican, that roundly mocked Fox News for much tamer allegations against its personalities. The “holier-than-thou” set not only had a heretic in its midst, he was one of its leaders.

There was barely a progressive cause Weinstein didn’t claim champion status on, even attending the “women’s march” earlier this year in New York City.

But beneath the surface, everyone knew he was a fraud…although they whispered it only in dark rooms.

The people who openly condemned then-candidate Donald Trump as a sexual predator for what he said in the Access Hollywood tape protected a man who actually acted that way. They happily made him richer because he helped make them rich.

When the story broke there was a wave of “I can’t believe it took this long”-ism, which makes you wonder why none of those people now claiming it was about time had remained complicit for so long. If they knew, they also knew journalists who could’ve reported on it. Yet they chose silence.

Michael Moore, the modern progressive Leni Riefenstahl, is never shy to express his opinions or hesitant to cast aspersions on anyone he deems politically impure. Since the story broke Thursday, and as of this writing Friday night, he’s been mum.

He’s found time to rail against the Second Amendment, but hasn’t managed to find the time to so much as comment on the man who produced his movie “Fahrenheit 9/11.” In fact, Weinstein has produced two other Moore movies since, and perhaps key to Moore’s silence, is executive producer of Moore’s next movie, “Fahrenheit 11/9,” due to be released next year.

Could his own bottom line be the reason Michael Moore, the progressive hero and feminist champion, hasn’t weighed in on the biggest sexual harassment scandal in Hollywood in a generation?

Moore wasn’t alone, obviously. The late-night comedians were silent on the subject the night the story broke, as were most of Weinstein’s regular collaborators. Did they know?

It’s hard to imagine how they couldn’t have known since they worked closely with him for long periods of time and people who didn’t sure knew.

The same goes for the Democrats who gleefully cashed his checks and now are scrambling to rid themselves of his money. They can’t feel too dirty about that money – they didn’t give it to hurricane relief or victims of the Las Vegas massacre; they gave it to Emily’s list, a progressive activist group that works to elect Democratic women to office. That’s like taking dirty money from your right pocket, putting it in your left and declaring it clean.

As Weinstein collaborates with former Clinton and Obama staffers to spin his story and what he must see only as a public relations matter, keep in mind just how intertwined with the liberal power structure he has been over the decades. He made 13 visit to the Obama White House, with nine of those visits with the president himself.

He wasn’t just a donor, he was in the inner circle of the liberal elite. They all cashed his checks, attended his parties, laughed at his jokes, drank his wine, took his calls, ignored all the stories and rumors, and kept their mouths shut.

Then again, Weinstein did author a column defending admitted child rapist Roman Polanski entitled, “Polanski has served his time and must be freed,” in 2009. If defending a pervert who did not, in fact, serve his time but fled the country and has been a fugitive ever since was not a red flag, not politically disqualifying, not a problem at all, perhaps nothing is. They did, after all, support Bill Clinton twice, so maybe they really have no standards and are just run of the mill hypocrites.

Still, liberals set the standards, they made the rules, they should be held to them. If all members of the National Rifle Association share the responsibility for the massacre in Las Vegas, as many Democrats have said this week, don’t all leftists share the blame for aiding and abetting a sexual predator in their midst?