Derek Hunter
|
Posted: Mar 30, 2017 12:01 AM
Share   Tweet
The opinions expressed by columnists are their own and do not necessarily represent the views of Townhall.com. 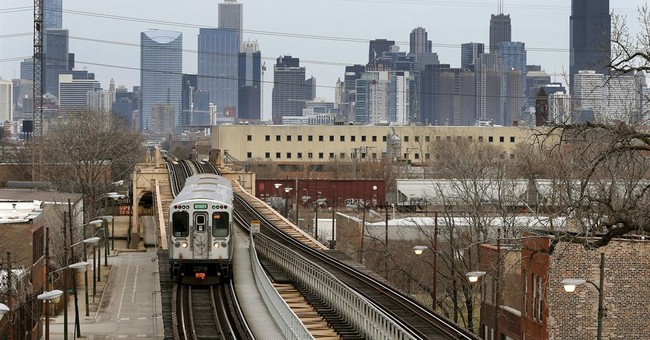 Having lived in three of the nation’s most dangerous cities – Detroit, Baltimore and a short stint in Chicago – I’ve seen the remains of some once-great American metropolises. Outside of pockets (the north side of Chicago, Baltimore’s Inner Harbor, the small, surging sections of downtown Detroit among them), their better days were behind them by the time I came along. But I could see the shells of what once was.

Still, seeing the aftermath and living through the decline are two entirely different experiences. Until a time machine is invented, I never will fully know more than the second-hand stories echoing from the shells of these lost cities.

Hope springs eternal, though much slower as time passes. I’ve seen some rebirths in the midst of decline. But with each new story of a horrific crime or crazed city government initiative, a root is ripped from the future.

As I said, I’ve only seen these cities after they had passed their prime. My time wandering the hull of Michigan Central Station in Detroit in the middle of the night with friends never will replace the firsthand knowledge of living the spectrum from its glory days till now.

That’s why I was both saddened and grateful for an email I got this week from a listener to my radio show. The decline in my lifetime is nothing compared to what a man named Sandon Cohen has lived through in Baltimore.

Mr. Cohen has lived his whole life in Baltimore, as did his parents. But he can’t anymore; he just can’t.

It’s not so much that he changed. His city did. The attitudes, the economy, the government now all make his hometown unrecognizable from the way it was for most of his life.

The Baltimore City Council recently passed a resolution reaffirming its status as a “welcoming” city, which is code for being a sanctuary city. The new mayor mercifully vetoed an attempt to raise the city’s minimum wage to $15 an hour in spite of the struggling city economy and devastating unemployment rate. It’s suicide through politics.

Cohen has seen it all, lived it all. And he can’t be a part of it anymore.

When I read his email I quickly responded to ask if I could reprint it here, saying the testimony of someone who lived something always will be more powerful than someone else reciting statistics and second-hand stories. He graciously agreed.

The following three paragraphs were written by Cohen, a life-long Baltimore resident, but they could’ve been written about any major city under decades-long progressive Democrat control.

I have always resided in Baltimore City. So did my parents. My grandparents also lived in the city for most or all of their lives. I worked downtown for nearly thirty years. After my parents died six years ago, I moved back into the house which they had acquired in 1959, shortly before I was born, in the Arlington or Glen area of the city. While I would have preferred to live in this beloved home for so long as my health permits, I can no longer avoid the conclusion that my wellbeing requires that I move away. The causes are frequently topics of your programs.

On the afternoon of January 12, in broad daylight, three young men attempted to carjack me in front of my house. They struck me, knocked me down, and managed to take my car keys. They seemed shocked when I resisted and denounced them and fled without my vehicle when my screams attracted the attention of a neighbor. The police who responded were sympathetic and professional but ultimately of little assistance. They admitted to being overwhelmed due to the increasing levels of crime and the decreasing size of the police force. Due to this occurrence and the reports of many similar incidents throughout the city, I have since felt fear every time I have had to leave the house or travel in or near the city and spend as much time as possible indoors.

Your station reported a few days ago – to my horror – that Mr. Young, the president of the City Council, has proposed that funds be taken from the police department to reduce the deficit in the school budget. I have heard no proposals from the members of the Council that would result in the hiring of additional police or otherwise deal realistically with the level of crime and other problems that have beset the city. Instead, they spout collectivist ideology that experience has long discredited, placing burdens such as an unjust minimum wage upon such producers of goods, services, and employment as remain in the city, while inviting unskilled workers from overseas to compete with those who were born in the city to compete for the shrinking number of jobs that will remain available to them. How can “progress,” however defined, be achieved in an environment where no one is safe from crime and in which more people will be driven to crime by the lack of opportunities for entry level workers and by the contemptible philosophy of certain members of the Council that those who find themselves in need are somehow the victims of those who do not? Where do the members of the Council expect to obtain funds necessary to provide public education and other legitimate government services for those who remain after law abiding taxpayers such as me leave, as hundreds of thousands have left over the last fifty years?

Someday, hopefully, residents of these cities will wake from the coma induced by grand, undelivered promises and realize new politicians implementing the same failed policies is not “change,” nor a “new direction.” It undoubtedly will be too late for some, but it doesn’t have to be too late for them all.