Derek Hunter
|
Posted: Apr 10, 2016 12:01 AM
Share   Tweet
The opinions expressed by columnists are their own and do not necessarily represent the views of Townhall.com. 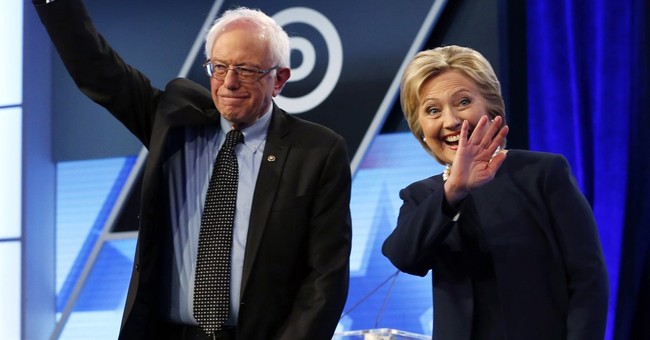 As the media focuses on what promises to be “The Mistake On The Lake 2: Electric Boogaloo,” also known as the Republican convention in Cleveland, there’s another tire fire heating up in the City Of Brotherly Hate. The GOP convention looks like it will be a mess, but the Democratic convention a week later could be worse. After all, if there’s one thing Democrats know how to do, it’s throw a convention that turns into a total riot.

As you know if you’ve been exposed to even a minute of mainstream news over the last month, the odds of a Republican candidate reaching a majority of delegates are slim. But no matter how much news you watch, you probably haven’t heard much about how the Democrats likely will roll into cheesesteak land with two candidates bloodied and brimming with animosity for one another and, like the Republicans, no candidate with a committed majority of delegates.

Hillary Clinton almost certainly will have more delegates in Philadelphia than Bernie Sanders, but she is unlikely to reach the 2,382 required to secure the nomination.

This doesn’t mean that Democrats will have a contested convention. But it does mean the party known for chanting “This is what democracy looks like” at its protests will have a nominee selected by super-delegates and not the people.

It’s not as romantic or as ratings-grabbing to point out how divided Democrats are, especially when so-called conservative commentators can incite panic in Trump loyalists with tales of “stolen” nominations. But divided the Democrats are.

No one on the left is trying to change the rules so they can win automatically without claiming a majority of the delegates or threatening to take their ball and go home otherwise. But liberals will slink into Philadelphia and party elites, not delegates chosen by constituents, will anoint Hillary Clinton their nominee.

And unless Bernie Sanders makes a huge deal out of it, the media will look away as the bourgeoisie imposes its will on the unwashed. Ultimately, that is the very epitome of “progressive.”

What we won’t hear is that the Democratic Party is deeply divided, and the chasm between Clinton and Sanders supporters is just as deep as that of the pro-Trump and #NeverTrump crowd in the GOP.

Clinton supporters are who you’d expect them to be – moneyed white liberals with a sense of superiority, un-moneyed minorities who still think blind loyalty to a party and a family somehow will lead to different results than we’ve seen in the last 60 years and rent seekers who stand to profit from government contracts, connections and mandates on “green” energy. The coalition makes sense and feeds off itself.

The Sanders coalition is the “tear it all down” mob. His fans have no interest in unity or the health of the nation. They’re angrier than Clinton’s crew and motivated by jealousy to the point they feel entitled to the fruits of other people’s risks and labor. They’ve embraced the “system is rigged” meme to avoid acknowledging their life is a direct result of their bad decisions and refusal to apply themselves. Weed and drum circles are much easier than work.

But they’re two sides of the same coin. They’re the spoil sports in every family who gripe about how others got more of the inheritance than they did rather than admit they should have gone to visit grandma for its own sake.

Reconciliation requires an intervention, and that won’t happen when the scab hasn’t hardened and superdelegates pour lemon juice on the wound by pushing Hillary over the top. There may not be riots at the Democratic convention, but the people most likely to riot outside the security perimeter in Cleveland will have delegate credentials in Philadelphia.

For all the hype of a walkout should rules not be ignored and Trump be anointed, Philadelphia will have a deeply angry and entitled crowd who won’t be pleased when their hopes for a revolution are dashed.

It’s Shakespearian in a way. The young, angry activists are the direct product of the policies and ideology of the old, angry activists. And the old activists are prepared to deliver without protest their nomination to the candidate who’s earned more from speeches to the demonized “Wall Street” banks than they’ll collectively earn in a year. Frankenstein’s monster will be outvoted by the good doctor, and it’s entirely possible the resulting reaction will be about the same.