Derek Hunter
|
Posted: Feb 07, 2016 12:01 AM
Share   Tweet
The opinions expressed by columnists are their own and do not necessarily represent the views of Townhall.com. 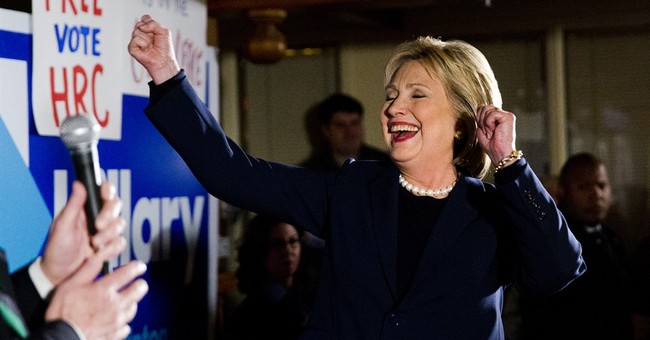 Aside from “the establishment,” there is no bigger boogeyman in the 2016 election than the dreaded “Goldman Sachs.”

“The establishment” is a bipartisan Freddie Krueger, haunting the dreams of people whose only knowledge of the term is an abstract notion spun by those selling something. Goldman Sachs, on the other hand, is a tangible company, a legal company, but perhaps more demonized on the left than anything this side of the Koch Brothers.

If you’re inclined to think “Wall Street” is robbing you blind, invoking Goldman Sacks is enough to make you grab a pitchfork. That’s why its name has become a pejorative attack term.

Of course, Goldman Sachs is just one of many investment banks in the world. But saying so-and-so is “the candidate of Deutsche Bank” would only confuse some Democratic primary voters into thinking they were talking about a lesser-known Bond villain. So Goldman Sachs it is.

The candidate of Goldman Sachs, without any question, is Hillary Clinton. Clinton earned $675,000 for three – count ‘em, THREE – speeches to various branches of the company. The CEO of Goldman, Lloyd Blankfein, and his wife are Clinton supporters – she has maxed out to her campaign and he’s on board, too, though he won’t say it publicly because he doesn’t want to hurt her chances.

This is nothing new. During her Senate career, Goldman was second only to Citigroup when it came to campaign cash for Hillary Clinton. JPMorgan Chase, Morgan Stanley, even Lehman Brothers also were among Clinton’s biggest patrons.

So when Bernie Sanders calls Clinton the candidate of Wall Street, he’s not lying.

Hillary, naturally, denies this charge. She says she’s never changed her positions based on who gives her campaign donations. This may be true. But campaign contributions generally aren’t just to “get things done.” Often times they are to stop things from getting done. To hold government at bay.

In her time in Washington, Hillary Clinton has talked a good game about the evils of the wealthy and Wall Street. But what has she done about it?

The charge of being the “candidate of Wall Street” got Hillary angrier in Thursday night’s debate than she’s been since she was railing against President George W. Bush. The mere suggestion that nearly three-quarters of a million dollars for a couple of hours of talking could have any influence on her was akin to suggesting she kicked puppies for fun.

Indignant, Clinton said nothing could be further from the truth. That employees of a large investment firm wanted only to hear her regale them with tales of the raid that killed bin Laden – which she was, at best, tangentially involved in.

So Hillary’s defense is this story – the unclassified parts of which were readily available publicly – was so compelling that Goldman Sachs employees needed to hear it three separate times? Or three separate divisions of Goldman decided they must hear it for themselves?

Maybe her first speech rippled through the firm like layoff rumors and others couldn’t resist the siren call of the account of vague details and listening to radio traffic. Doubtful.

When companies plunk down huge sums for a speech it isn’t to entertain their employees.

Hillary, of course, could end any speculation on the subject by releasing the transcripts from her speeches. But, in traditional Clinton style, the gatekeeper of that information (her), after promising to “look into it” in front of a crowd, is now refusing to do it away from television cameras.

Why? Because when companies hire speakers, they tend to want them to say something relevant to their industry and favorable about their company. It’s highly likely Hillary Clinton sang the praises of Goldman Sachs, investment firms and Wall Street in general.

She could’ve gotten away once with telling them they’re the root of all our economic ills and pure evil, but not two more times. If companies wanted to pay a lot of money to be told they’re awful, they’d hire Don Rickles for a lot less money and a lot more laughs.

So why won’t Hillary release the transcripts? Because the contents of those speeches would be damaging to her narrative that she’ll “stand up to Wall Street.” You can’t “stand up” when you’re on the record bowing down.

So what did Goldman Sachs get for its $675,000, plus huge campaign contributions? For one, you can rest assured when it calls, she answers. Although, as a private citizen, she wasn’t in any position to help them at the time, there was no doubt she was running for president. Hillary claims she wasn’t sure she would run then, but the Washington Post was. As was everyone else on the planet.

Goldman Sachs paid a friend, a powerful friend, mostly to leave it alone should Hillary ever find herself in a position to truly upset the apple cart. What she says to get votes, as is the case with most politicians, is irrelevant.

Or course, all of this is unprovable. Clinton is corrupt but not stupid. Presidents can find all manner of reasons to oppose legislation that have nothing to do with the purported purpose of a bill.

The assurance there will be no serious, dogged follow-up questions or investigative reporters dispatched to uncover the content of those speeches is a given.

So we’re left with Hillary receiving a huge sum of money to talk for a short while on topics we’re left to speculate about. One thing I’d like to know is why she charged UCLA $300,000 for a “20- to 30-minute speech.” And when the school asked for “the public university” reduced rate, they were told that was the reduced rate for schools.

So why did she charge UCLA more than Goldman Sachs? Does she care more for investment banks than colleges? Or was it all those campaign contributions?

Maybe it was just the benefits of friendship.

PS: If you’re looking for a great vacation this summer, consider coming to Italy with me and my listeners. An amazing 11-day vacation you will never forget.