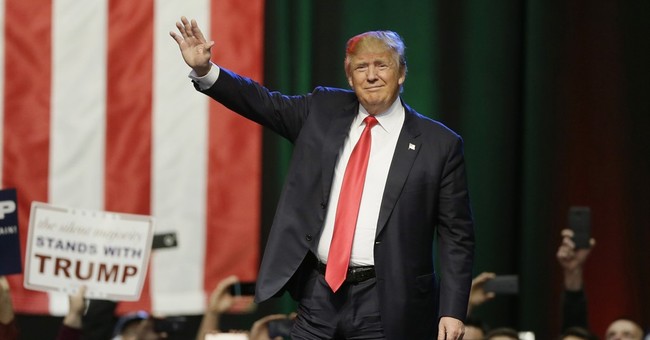 “Hillary Clinton and the mainstream media are so awful.”

“They’re so awful they put me in a position where I have to defend Donald Trump.”

Every conservative has had that thought, or some variation, since the billionaire businessman announced his campaign for president in June.

For all his faults, and there are many, Donald Trump has performed a masterful service to the conservative cause: He’s exposed the American political left for the hypocritical fraud it truly is.

In Saturday night’s Democratic debate, frontrunner Hillary Clinton lied. There is no other word for it. She said Trump is the No.1 recruitment tool for ISIS, that he’s being used in ISIS videos to attract new terrorists.

That’s so untrue even Politifact called it a lie. Why the editors didn’t deem something for which there is zero proof in their own estimation a full “pants on fire” lie can only be chalked up to it having been said by a Democrat. Thus, calling it a lie is as far as they can go and still get awards for “journalism.”

Although even Politico admitted this was a lie, it still was used as a jumping off point for the liberal media to attack Trump. A CNN anchor even said “we’ll leave that aside” after admitting it was a lie. It’s good to be a Democrat.

The media pretty much gave Hillary a pass on that lie. They also gave her a pass on the bigotry behind assuming a large swath of the Muslim world is so fragile and easily swayed to murder by the words of a candidate for president.

She seems to believe, or at least thinks Democrats believe, Muslims who otherwise lead normal lives, would, upon hearing statements from Donald Trump, give up their peaceful existence, pledge allegiance to a murderous cult that has slaughtered more of their religious brethren than any other force on Earth, kill innocent people and be willing to die. Talk about condescension.

Oddly enough, Hillary’s husband and her former boss, President Obama, actually are featured in ISIS recruitment videos, not Donald Trump. The media ignored this – so busy were they discussing whether Hillary’s lie has an element of truth in it.

The lie fits the narrative, so the lie carries the day – facts be damned.

When not lying, Hillary was busy nailing herself to the cross. And the media was right there to play along.

At a campaign event, Trump said Hillary was “schlonged” in 2008, when she was handily rejected by Democrats. At first blush, this sounds like a crude comment, Trump being Trump. I rolled my eyes upon first hearing it.

It turns out it’s a common phrase in New York politics.

While the media was hyperventilating about the sexism of Trump, The Donald tweeted, “Once again, #MSM is dishonest. "Schlonged" is not vulgar. When I said Hillary got "schlonged" that meant beaten badly.”

I, like many, thought this was just Trump being Trump again. He does do that a lot. But no, he had reinforcements.

These weren’t right-wingers or Trump supporters who came to his defense. They were – gasp – journalists.

Much like Luke still saw some good in Darth Vader and was proven right, some journalists occasionally are moved by an unseen force to buck the narrative for the truth.

Columnist Jeff Greenfield and New York Times reporter Alex Burns both came to Trump’s defense. Greenfield tweeted, “On further review, Trump is right on this. ‘I got schlonged’ is a commonplace NY way of saying: ‘I lost big time,’ w/out genital reference.”

Burns tweeted, “Moynihan said it all the time. Rockefeller too. ‘You know, Happy, they really schlonged me on this one.’ Really.”

You’d think a media so heavily based in New York City would employ one person who’d heard this before. They probably do, but when it comes to the narrative or the truth, the narrative wins. Trump, yet again, has exposed this.

Now, by no stretch of the imagination was this a deliberate tactic by Trump. He kind of fell backwards into it. But he falls backwards into these situations quite often. Although it seems more like there’s madness to his method, there is some method to his madness as well.

He sticks to his guns and stands up for himself against the Democratic Party/Media Industrial Complex in a way no other Republican dares to. It is why he’s winning. Moreover, it’s why other Republicans, whose plans are more detailed than, “We will have so much winning if I get elected that you may get bored with winning,” are losing.

Trump is rude and childish, but so are the Democrats. People who are rude and crude fight like hell to win. They don’t put things “off limits,” like when a candidate sat in a racist church for 20 years and called the bigot preacher a mentor. They don’t defer to biased moderators who leap to the defense of a floundering, lying candidate in the middle of a debate. They kick ass. They don’t even bother with taking names; they’re looking for the next ass to kick.

Nice guys get the girls in movies, but they get bloodied in politics. The media is a steamroller driven by Hillary Clinton. Getting them upset and attacking you for attacking her shouldn’t be avoided; it should be a prerequisite to even be considered as the Republican nominee. It’s about time someone did it.

That it’s almost all Trump at this point is why he’s winning. More importantly, it’s why everyone else is losing. If you can’t get the editors at the Huffington Post or the New York Times upset over the way you’ve spoken the truth, there is no way you’re going to actually upset Hillary come November.

It’s time some in the GOP field step up and learn the lesson Trump is inadvertently teaching – or get out of the race. Because if you look at The Donald and see an oafish buffoon and nothing more, what’s it say about you that he’s beating you?