There Is No Bottom For The Left’s Hypocrisy 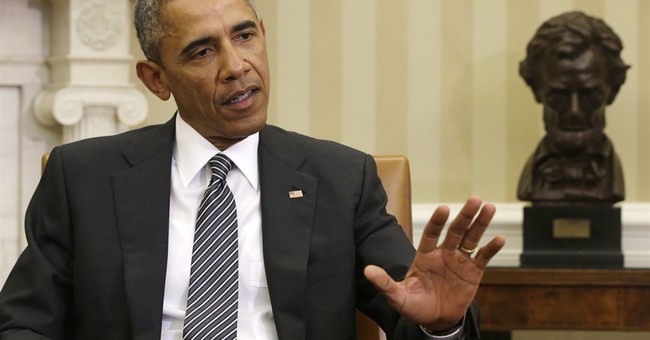 They say before alcoholics can decide to get sober, they first must hit bottom. This provides a “moment of clarity,” after which they consciously decide to change. But for the “moment” to occur the bottom must be hit, a point so low there is nowhere to go but up. For progressives, when it comes to advancing their agenda, there simply is no bottom to hit.

Each time you think those on the left can go no lower, they find a shovel.

This week the president’s unilateral action on amnesty, something he said nearly two-dozen times he didn’t have the authority to do, was halted (at least temporarily) by a federal judge because, as the judge rightly said, it would be impossible to undo should it ultimately be found unconstitutional. This set the liberals digging.

While decrying the uncertain fate of poor, sweet, nourishing illegal aliens, The New York Times whined, “President Obama surely knew that his recent executive actions to protect millions of undocumented immigrants from deportation would run into trouble as soon as a 26-state lawsuit opposing the actions landed on the desk of U.S. District Judge Andrew Hanen.”

Why? Because, as countless progressives in and out of journalism breathlessly pointed out, Hanen was appointed by President George W. Bush. What they don’t say is he was confirmed by the Senate unanimously. No Democrats thought he was a threat to the republic when they had a chance to do something about it. But why point that out when your objective is to paint this not as a constitutional issue, but a partisan one?

The ruling will be appealed by the Justice Department, but the Times is very upset. “However the appellate courts come down on the case,” they write, “Mr. Obama is finding himself once again dealing with a familiar sort of Republican intransigence.” Poor guy.

The Times continued, “On immigration, the Republicans seem to want only to savage the president’s efforts to address a pressing nationwide crisis, just as they have on health care reform.” It’s almost enough to make you cry, isn’t it? Those damn intransigent Republicans and their obsession with the Constitution and principles.

Speaking of savaging the president’s efforts, several senior Democrats this week asked the Obama administration to change Obamacare yet again. Seems they don’t think their constituents are smart enough to realize not signing up for Obamacare has negative tax consequences. These constituents may not be all that bright – after all, they elected people who came to Washington and voted for Obamacare.

But what’s important is Congress voted for Obamacare as is, with these requirements and fines. Why ask for it to be changed when this is what you voted for?

Fear not, stupid people, the administration granted this wish and the deadline was extended by a week. Seems President Obama’s magic pen still has some ink left in it.

Also this week we discovered that the only thing needed to curb some Muslims’ willingness to slice someone’s head off is a job. State Department spokesman Marie Harf, who would be unemployable if merit mattered in progressive politics, told MSNBC that “We need in the medium and longer term to go after the root causes that lead people to join these groups (ISIS), whether it is lack of opportunity for jobs…”

It seems Harf thinks millions of Muslims sit around dreaming of a “9 to 5,” then run off to join a murderous gang of sub-humans who set people on fire because they didn’t get that entry-level gig downtown. So this administration’s foreign policy as it pertains to radical Islamofascism is to create on the other side of the planet what they haven’t been able to create here.

Harf, hiding her ignorance behind a master’s degree and Lisa Loeb’s old glasses, told CNN, “Look, it might be too nuanced of an argument for some like I've seen over the past 24 hours some of the commentary out, but it's really the smart way for Democrats, for Republicans, military commanders, our partners in the Arab world think we need to combat it.”

See that? You’re just too damned stupid to understand how smart these progressives are. Sure, their ideas haven’t worked and, in fact, have made things worse, but that’s only because you… Oh, who am I kidding? There’s no way to end that sentence without undergoing a full frontal lobotomy or becoming a progressive, and I’m uninterested in either.

These ridiculous statements not made by the media went largely unchallenged by the media. Chris Matthews did point out how Harf’s prescription for curing radical Islam was insane (though he didn’t press the point that hard), but Wolf Blitzer let it slide like a well-trained dog.

What can you really expect from an administration led by a man who watches 21 Christians beheaded from a golf course and can’t bring itself to point out that they were killed precisely because of that fact? Nothing, actually. Perhaps the White House sees it as justifiable retaliation for the Crusades.

The media didn’t bother to point out any of this week’s hypocrisy; and fellow progressives cheered it.

The left’s resolve to speed “forward” at all costs, no matter where “forward” leads, is admirable, in a way. Too bad it’s in the same way with which the captain and crew of the Titanic resolved to go down with the ship.