Gang Warfare With Uniforms And Referees 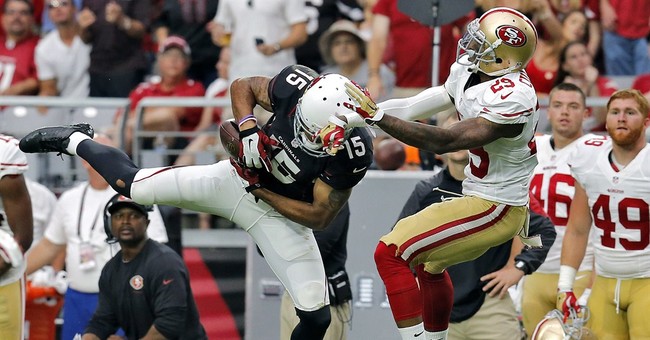 I’ve never been one for spirit—team or school. I went to Wayne State University in Detroit, and I had to Google what the team nickname was. It used to be the “Tartars,” not just a sauce but an ancient tribe. But it apparently was changed in 1999 to “Warriors.”

In high school, when I saw friends or coworkers who went to other schools, I looked for the opportunity to do something I enjoyed doing – telling them their school sucked. I honestly couldn’t care less about their schools, but I wanted to gauge their reaction. There were two: not caring too, or the passionate “Oh, yeah? Your school sucks too!”

The first response I could understand because I shared it, but the second amused me. More than that, it perplexed me.

Because, although school spirit, school pride always eluded me, it mattered to them. The concept carries over to adulthood and seems to be a problem for some of them.

Surely there’s always been team spirit – you grow up in a city, and you like sports, you’re more than likely a fan of teams from that city. And taunting players and fans of the visiting team is nothing new either. But we are seeing more and more of that sprit and taunting ballooning into something else, something crazy. Something ugly.

Last Sunday in Arizona, the San Francisco 49ers came to town to play the Cardinals. At halftime a huge brawl involving upwards of 50 people broke out in the stands. The fight involved men and women, people thrown down the stairs, arrests and ejections all around. It started with fans taunting, then throwing beers and punches at each other—simply because some were fans of the other team.

None of the participants were players, coaches, owners or in any way affiliated with either team beyond being fans. Yet they were so emotionally invested, and/or drunk, that the mere existence of someone supporting the team playing theirs caused physical violence.

Alcohol, no doubt, played a role. Football fans love their tailgates, and many start grilling and drinking hours before games. But this violent fan problem isn’t unique to the NFL.

Last year at Camden Yards in Baltimore, a Yankee fan took a date to see his team play the Orioles. The fan, Matt Fortese, wore a Yankee hat. He ended his night with a fractured skull. Two idiots taunted and attacked Fortese for being a Yankee fan.

In 2011, San Francisco Giants fan Bryan Stow went to watch his team play the Los Angeles Dodgers at home. After the game he was beaten nearly to death, suffering a traumatic brain injury that has left him permanently disabled and unable to care for himself.

I’m from Detroit. We were pioneers in the field of rioting over sporting events. In 1984, Tigers fans decided to celebrate the team’s World Series victory by flipping over cars and setting them on fire. Since then, Ann Arbor and East Lansing have seen their share of sports riots, too. Detroit didn’t have any after the Red Wings won multiple Stanley Cups, at least as far as anyone knew. By the mid-90s, there was no way left to tell if there was a riot in Detroit because the entire city looked like one just swept through.

But sports riots, both after winning and losing, have become commonplace. Maybe I’m missing something, but I’ve never been so happy or upset after any sporting event that I wanted to burn something or break someone else’s property.

Likewise, I’ve never thought someone who roots for a team that’s playing one I like had to suffer for that sin. So what’s going on?

Is it that people are getting more violent? Dumber? Drunker? Is marketing instilling a sense of participation in fans even though their cheering, rooting, or mere existence has zero bearing on the game? All of the above? I don’t know. But I hope someone figures it out before the Crips come to town next week to take on the Bloods. I hear it’s going to sell out and I’m laying a lot of money on the Bloods.