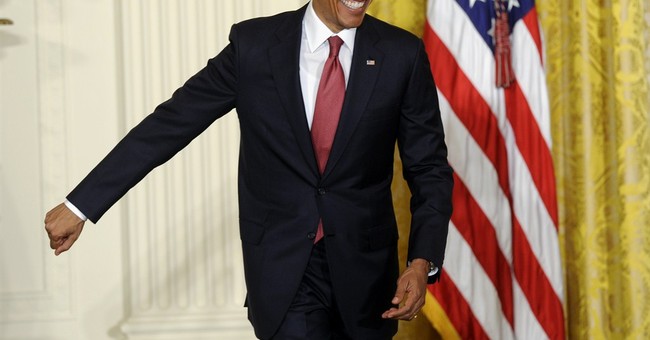 We don’t have a president leading our government; we have a petulant child throwing a series of temper tantrums.

Barack Obama has never shown an aptitude for leadership, mostly because he’s never led anything. But in his limited pre-government career as a community organizer, his job was not to accomplish anything. It simply was to get people riled up over the “injustice du-jour,” make them believe he has the cure for what ails them, and raise money. He’s run his presidency on this snake-oil-salesman mentality; only now, he’s begun to run out of suckers to bilk.

There always will be a base of sycophants, ideologues, profiteers, lemmings, low-information voters and, to put it simply, idiots, who will support any politician, no matter how awful. A Quinnipiac Poll released this week pegs that number at 8 percent for President Obama.

Yes, after doubling the national debt, sustained high unemployment, the self-inflicted border crisis, the VA body count, weaponizing the IRS, all the scandals, the broken promises, the proven lies, the golf, the lavish vacations, the Supreme Court smack-downs, there is still 8 percent of the American public who think Barack Obama is the greatest president since World War II.

But 33 percent believe he’s the worst in the same time period, more than any other president.

People are waking up. Unfortunately, it’s too late.

It seems every week now the president gives a speech on how he’s going to act as though he’s a dictator because Congress won’t give him everything he wants. The “constitutional lawyer in the Oval Office” takes great joy in pretending the other two co-equal branches of government do not exist. And they might as well not exist, given the president’s interaction with them.

When not jetting off to public events around the country, always conveniently scheduled around Democratic fundraisers so taxpayers can pick up the travel tab, the president golfs. In fact, while on his “official trips” the president golfs. The only thing that can pull him off the links are campaign-style rallies and fundraisers. There’s never been a president more interested in the trappings of the office but less interested in the duties of it.

Even Democrats on Capitol Hill are grumbling about how disinterested President Obama has become in engaging Congress. The president never again will face the voters, but members of Congress will this fall. And they are the only conduit through which the people can take out their frustration over Obama’s failures. His allies are trying to push the tired mantra of a “do-nothing Congress,” but that can’t trump a “do-everything-wrong president.”

Even as the president golfs and ignores his duties, he still has an agenda. He could, through the traditional method of compromise and working with Congress, get a sizable portion of his agenda passed. But that doesn’t interest Barack Obama because compromise would mean giving Republicans something. You can’t “fundamentally transform” the country through giving an inch or doing things that will improve the economy. It must fall, people must be scared to death, if they are to accept a full-on intrusive, progressive government.

Barack Obama chooses to ignore tradition, ignore precedent, ignore the Constitution and use his magical pen to impose his will and his magical phone to rally his 8 percent mob. He has bet his place in history not on results, but on the cult of personality his handlers and minions in the media have built around him. And it is formidable.

The president’s “legend” was built before a single vote was cast. He was the smartest, most gifted man to ever run for office because, well, people sitting in front of television cameras said he was. There was more proof of Bigfoot than his brilliance, but a lie repeated earnestly enough, especially to a people trained to look externally for solutions to problems in their lives, has a way of obtaining credibility that the truth has difficulty overcoming. The truth is a tree and the lie a weed – it needs time to truly take root and grow, but it then sprouts quickly and can choke out anything else near it.

Barack Obama can give a speech, but his words are petty, small and meaningless. But the delivery, the visual of his Mussolini jaw jutting forward with confidence, the cheering crowd reminiscent of a revival meeting, the follow-up shameless repetition of known untruths all served a small part in intoxicating people into believing in the messenger and ignoring the message.

The euphoria has worn off all but the lost few unreachables. With his own dictates being rejected by the courts and the masses, his desperation is growing. Impotent in most legal ways, his shallow brand of leadership leaves him only with public temper tantrums, insults and complaints unworthy of his office. His “desperation bottom” has not yet been reached; he will keep falling because the alternative is beyond him.

That the American people have seen through the veneer of Barack Obama means there will be more late-night stand-up routines packaged as policy speeches, more complaints about people he won’t talk to being unwilling to work with him. Were there not an infinite supply of strawmen, they would be sacrificed to extinction in his remaining years. The only thing Obama will use more frequently than strawmen between now and Jan. 20, 2017, is the “mulligan.”

Our nation deserves better and will be better. The United States is strong enough to survive even the amount of damage one petulant man determined to destroy it can inflict. Not matter how many temper-tantrums he throws.