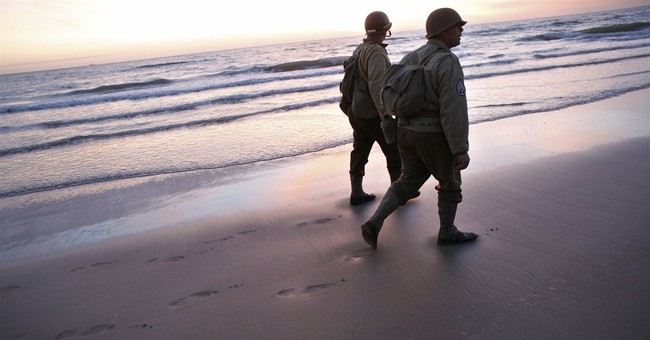 There are some days when a column comes easy, when it just flows out in one straight series of fingers tapping on keys, a click on save, and calling it a day. Most days, in fact. Then there are other days when there are so many ideas, so many things you want to say, floating around in your head that the task of organizing them seems impossible. It’s Friday night, June 6th, the 70th anniversary of what I consider to be the most important day in modern history, and I have no idea what to write.

The idea of weighing in on a news issue of the week seems small today. The president’s regulatory power grab to destroy the coal industry, White House lies about an Army deserter, the latest depressing economic data, all of it pales in comparison to what those 150,000+ men willingly faced seven decades ago.

As I type this I’m drinking a glass of expensive single-malt scotch over a ball of ice and watching Band of Brothers. I’m normally a vodka drinker, having had an unfortunate night involving a girl, a party and mass quantities of whisky early in my underage drinking career. This came to involve punching my car door, breaking my hand, sneaking into bed only to discover the next morning that the Ace Bandage I’d wrapped it in the night before hadn’t “fixed” the problem, then having to ask my parents for the Blue Cross card because I’d “tripped over a dog” at a friend’s house. To make matters worse, my fiberglass cast smelled like what nature had forced me to purge 12 hours earlier, so I had a reminder of my stupidity wafting past my nose for six weeks.

I doubt my deception fooled my parents, but they were kind enough not to question it, having seen I’d suffered enough and would for the next month and a half.

After that I’d sworn off whisky. The smell was enough to make me nauseated. But years passed and, against my better judgment and many previous refusals of invitations, I was persuaded to try “the good stuff.” And it was good. It never occurred to me that all whisky didn’t taste like paint thinner, only the ones I could afford did.

Why am I telling you this? Because I can’t think of what to write. I want to write about D-Day, but nothing I could say would ever do justice to those amazing men and what they accomplished. What do you say about the men who ensured your ability to say it? How do you thank people for going through Hell so those who come after them don’t have to?

“Thank you” is the best our language has come up with, but truly fitting words have yet to be created.

The truth is we can thank them individually, and we should, every chance we get for as long as we’re blessed to have them with us. But that will never be enough. Enough, if there is such a thing, is living lives worthy of their sacrifice, by living up to the ideas for which they fought and died.

And by that measure, we aren’t doing so well.

CNN released a poll this week showing 59 percent of Americans believe the American Dream is out of reach, unattainable. Another survey found 52 percent felt they “had to make at least one major sacrifice in order to cover their rent or mortgage over the last three years.”

What constituted a “major sacrifice” to those surveyed? Well, “These sacrifices include getting a second job, deferring saving for retirement, cutting back on health care, running up credit card debt, or even moving to a less safe neighborhood or one with worse schools.” I’m old enough to remember when such things were considered choices. Now they’re sacrifices, and we’re all victims.

A woman who lives in the progressive bastion of Austin, Texas, was quoted in a story on high property taxes there as saying, “It’s not because I don’t like paying taxes. I have voted for every park, every library, all the school improvements, for light rail, for anything that will make this city better. But now I can’t afford to live here anymore. I’ll protest my appraisal notice, but that’s not enough. Someone needs to step in and address the big picture.”

She’s voted for everything an ever-expanding government had to offer, and she doesn’t understand why government needs so much money to pay for it all. Can’t somebody else catch this check?

Choices are now sacrifices, 60 percent have given up hope, and people want the government to do more and more for them and for someone else to pay for it.

The government is growing at the expense of personal responsibility and individual liberty. The tyranny those men pushed back against 70 years ago is still alive and well today, only rather than winning through force it’s winning at the ballot box.

Someone asked my on Twitter the other day if those brave men could’ve seen the future, what we’re becoming, would they have done it again? Yes, they would have. The present has failed them, not the other way around. The American Dream isn’t dead, but the dreamer is dying. If we don’t recapture the spirit in those men who defeated the greatest evil the world has ever known and reclaim responsibility for our lives, it will die.

We stand here in the United States on the shoulders of the greatest generation to ever grace the Earth. It will be impossible for future generations to stand on our shoulders if we’re lying on our backs.

I don’t know if any of us ever will be able to lead lives worthy of the sacrifice. But if we don’t try…shame on us.