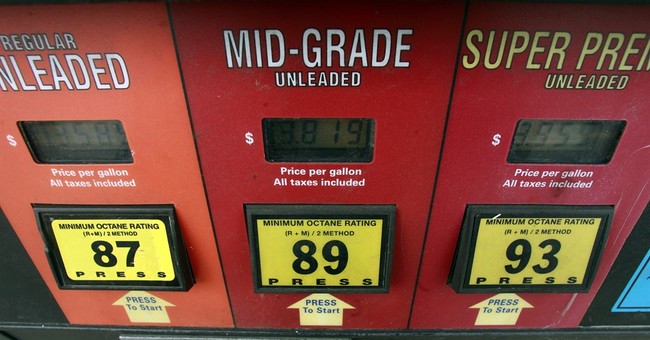 One thing I’m fond of saying on the radio is “Stupid spreads like a cold on a plane.” Mostly because it does. And mostly because that “stupid” is generally some progressive idea of governance, some plan or proposal to “fix” whatever the issue du jour happens to be. Generally, it’s a problem government action helped create in the first place. There’s always something, isn’t there?

Have you heard of the VMT? It stands for vehicle miles traveled, and it is progressives’ latest attempt to plug ever-growing state budget gaps caused by, alas, progressive policies.

VMT is being tested in Washington and Oregon as a “voluntary” alternative to state gas taxes. California is considering following suit. In exchange for a rebate of the gas taxes you paid—more than 50 cents per gallon in California—drivers agree to pay a per-mile tax.

There are some catches, as there always are.

First, you have to pay the gas tax when you buy your gas and wait for a rebate, which is akin to giving the government an interest-free loan till your rebate arrives. Also, at least I’d imagine, you have to have a stockpile of receipts. Lose some or all of them and you’re out of luck. Governments aren’t known for accepting the honor system when it comes to you getting your money back.

But, most importantly, you have to allow the government to track your odometer or install a GPS tracking device in your car so they can record every mile you drive, and every place. Right now it’s an option, but wearing seatbelts used to be an option too. Now, seatbelts are a primary offense—you can be pulled over if police see you not wearing one. In other words, things can change.

So why the VMT over the gas tax? Well, it seems the government, which set up the gas tax to pay for road maintenance, isn’t collecting enough money to meet those needs. Governments need you to buy gas, and lots of it, to cover their costs. And since the federal government is mandating ever-higher CAFE standards, this means cars go farther on less gas, which means less money to the states. Add to that state and federal incentivizing of electric and hybrid cars and you being to see the problem—less revenue but the same amount of wear and tear on the roads.

Although the VMT would raise more money for states (you didn’t really expect them to be doing this if it didn’t, did you?), it would, quite humorously, hit the very people who have been incentivized to buy electric and hybrids in the first place.

The current gas tax in Oregon is 30 cents per gallon, and the VMT is 1.5 cents per mile. That means if your car gets 30 miles per gallon, you pay 30 cents in taxes for those 30 miles. But, under the VMT, that same driver would pay 45 cents for those 30 miles, a full 50 percent increase in the gas tax. Some people like this idea because, even though they’re paying more, the refund aspect perverts the real impact. It feels like you’re getting a deal because you’re getting money back, even though you’re ultimately paying more. As the president is fond of saying, “It’s math.”

Electric and hybrid cars use less gas, which means those drivers with “Coexist,” “Obama/Biden” and “Love Mother Earth” bumper stickers will be hardest hit. They paid a premium for those cars—albeit one for which they got a tax break—not only so they could be “green” but so they wouldn’t get hammered at the pump.

I imagine that’s the opposite of the good karma the “Greenies” were looking for when they bought into the over-priced “save the planet” racket. It’s enough to make you laugh…almost.

But this is how government works. It creates a problem, then offers a solution. Meanwhile, that solution creates more problems, for which the government offers even more solutions. The ever-growing snake eats its own tail.

There’s a problem here, though. The normal solution when Democrats find themselves in this position is to blame Republicans. It’s usually pretty easy considering how horrible at messaging Republicans are. But these are states controlled by Democrats. They have no one to blame but themselves.

The normal solution for this situation would be for Democrats to simply raise the gas tax. It’s not like Democrats have an aversion to raising taxes. But Democrats have painted themselves into a corner on this issue.

Democrats are stuck with choices they don’t want to make: 1.) Raise the gas tax, which is wildly unpopular and regressive, so it will hurt the poor and hit the hated SUV drivers, but will appease their “green” supporters who overpaid for their cars to “save the planet.” 2.) Institute a VMT and run the risk of alienating “green” supporters who overpaid for their cars by giving a tax break to the very drivers they most hate, and hurt the poor because they tend to have to drive to other neighborhoods for work. 3.) Let roads continue to fall apart and annoy everyone; or 4.) Cut spending and/or replenish/stop raiding transportation trust funds so maintenance can happen.

None of these options are within the natural comfort zone of Democrats, so they’re scrambling. It will be fun to watch, especially if you don’t live in one of these states. But these states are not unique, they’re just first. This stupidity will spread to your state soon enough, just like bans on electronic cigarettes, trans fats and plastic bags. Just like that cold on a plane, there is no cure for the common stupid.