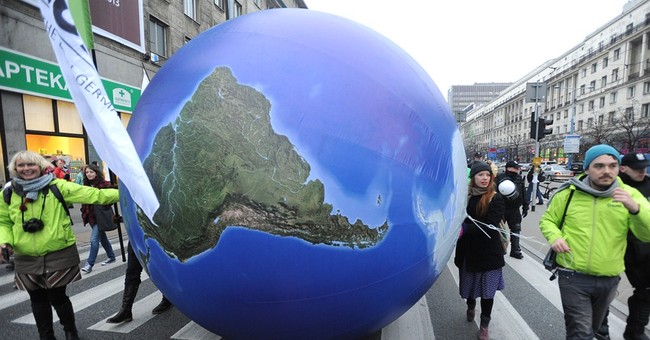 I was making a Costco run with my friend George on Friday, and the subject of the weather came up. It was a nice day, relatively speaking, but Saturday was going to be nicer – nearly 70 degrees. This was a nice change of pace from the polar vortexes and dump trucks full of snow we’ve been hit with here in Maryland for the past three months. Then I looked at my iPhone and noted the forecast calls for another possible large snowstorm Tuesday.

George said that seemed a little far away to predict such things with any certainty, and he’s right. Considering meteorologists rarely can tell you with any accuracy what happened yesterday, why should they be believed on what will happen next week? The fact is they shouldn’t.

What drives me nuts, as I told George, isn’t that they’re wrong so often. It’s the certainty with which they make predictions knowing they don’t truly know and so often are so off-base. It’s at this time that George, a medical doctor with a master’s degree in biology, a bachelor’s degree in mathematics and minor in chemistry, laughed, saying, “Nothing is absolute in science, except maybe in physics.” (Another area he spent a lot of time studying. He’s an over-achiever.)

It’s true: We know very little about the world in which we live or even our own bodies.

The Earth was flat and the sun revolved around it. Bleedings were prescribed for healing at one point by science. But we don’t need to go back that far to find confusion and contradictions in “settled science.”

Smoking causes cancer, but not in everyone and we don’t know why. Why eating a diet of fried foods makes one person fat but with normal blood pressure and someone else can be incredibly fit with a healthy diet but have high blood pressure remains an unknown. Science, at it’s most certain, is probability – sometimes extremely high, but still not 100 percent. And it’s changing all the time.

A few years ago, we were told saturated fat caused heart disease, and polyunsaturated fat was a “good fat” that was great for the heart. Labels were changed to highlight the absence of one and the presence of the other. Diets were launched. Cookbooks were written. Lives were altered. And it may all have been for naught.

The UK Telegraph reported this week, “Scientists have discovered that saturated fat does not cause heart disease while so-called ‘healthy’ polyunsaturated fats do not prevent cardiovascular problems.” This wasn’t just a 180-degree turn from what we “knew” to be true, it’s a full 540-degree loop from what used to be orthodoxy.

The fact is we don’t know which fats are good, if any, and which are bad, if any, with any certainty. What two months ago was known to be true, beyond any doubt, is now known to be false.

The true nature of science is truth-seeking, rarely finding. But in that seeking, some truth can be found. That smoking is unhealthy, even if it doesn’t cause cancer in someone, is beyond question. That a bleeding is not the best treatment for pneumonia seems obvious, even though it once was the treatment for it. It was the consensus, it was “settled science.”

The concept of “settled science” based on majority vote is the mantra of the climate change industry. Were pro-lifers to flood the field of biology, become the majority and vote that life unequivocally begins at conception, they’d reject the notion by a show of hands.

Science, by its very nature, requires proof. And proof is the one thing the hierarchy of the environmentalist movement hasn’t provided. Newsweek once wrote, “There are ominous signs that the earth’s weather patterns have begun to change dramatically and that these changes may portend a drastic decline in food production – with serious political implications for just about every nation on earth.” (Emphasis added.) Quite a few qualifiers in that sentence, don’t you think?

This was from an article in 1975 entitled, “The Cooling World” about the consensus among scientists that we were on the verge of a new ice age. (Read the whole thing here.) The science was settled. The vote had been taken. We were doomed. Only someone forget to tell the planet because the ice age didn’t happen.

Yet the solutions proposed then – more government control of the economy and us, higher taxes, less freedom, etc. – are nearly identical to the “solutions” proposed for global warming decades later. Since the planet hasn’t warmed in 18 years, despite consensus that it would, the catch-all term has been updated to “climate change.” This empowered progressives to blame anything on it – cold, hot, storms, droughts. But the solutions are constant – the same governmental power expansion they’ve been seeking for nearly a century.

Their faith, if not their facts, remains unwavering.

They believe in “science” – just ask them – but they hide their data from skeptical scrutiny and coordinate efforts to “hide the decline” in temperatures. Science is the seeking and understanding of provable fact – it’s knowledge, precisely what these progressives and academics seek to keep from the masses.

Ironically, the very people who attack anyone who dares question their faith is labeled a shill for “big oil.” Meanwhile those progressives control the bureaucracy that oversees the government spigot from which flows billions of dollars in grants to academics to study more “climate change.”

This leads to an obvious questions: If temperatures are rising, and it’s an irrefutable fact that humans are to blame, why does it require hundreds of millions of dollars to continue to prove it each year?

The answer is simple – scientists and academia is every bit as addicted to the money that flows to the belief in manmade climate change as they accuse skeptics of being to money from oil companies.

Progressives have their agenda. The American public rejects it – at the polls, when they run on it in campaigns, or later when they are again found to have concealed it. But they don’t care. What they can’t get at the ballot box, they seek from the courts.

What they can’t get in the courts, they seek through regulation. When they can’t win an argument, they create a moral imperative to justify it (ironic considering they’ve spent decades telling conservative “you can't legislate morality”).

“Save the planet,” “For the children,” and so on have been the battle cry of the greatest affronts to liberty this country has ever seen. And it’s all funded by the very taxpayers who oppose the end result – against their will and without their knowledge.

It’s the ultimate article of faith, a religion based not on a Supreme Being, but the supremacy of certain beings – progressives. But while there’s no proof God doesn’t exist, there’s ample proof their agenda does not work. Undeterred, they press on … ever “forward.”

The Holy Church of Global Warming (a wholly owned subsidiary of Climate Change, Inc. and its bureaucratic and political clergy in the progressives movement) are every bit as much a religion as any church you can name. It’s a religion based on faith not in a higher power but in a better, smarter group of people who know better how you should live your life than you do.

Just like those who tell you what’s good to eat, drink, etc., progressives would like people to believe science is on their side, and that once a vote is taken it is settled. Of course, science isn’t consensus. It’s not about a majority vote. And unlike the reality of their failed agenda, it rarely, if ever, is settled.