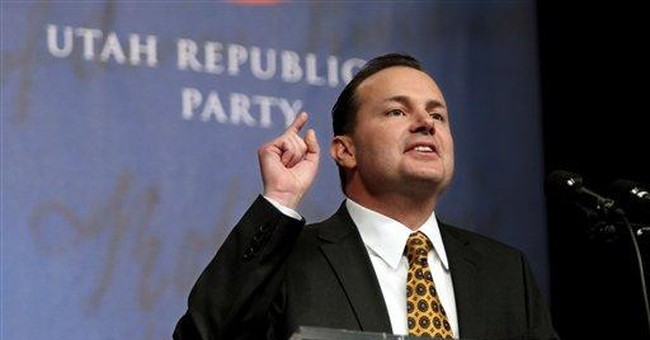 The Obamacare disaster is coming. Sure, the president is delaying or dismissing parts of it because they’ve proved either unmanageable or unworkable in the legally allotted time to set them up, but the most invasive and damaging aspects are still coming. But there is a chance to stop them in their tracks, IF Republicans have the courage to do it.

That “IF” is in caps because if there’s one thing Republicans haven’t been showing much of in the last decade it’s courage. When they controlled government completely under President Bush, they acted like Big Government liberals. When liberals took over government completely in 2009, Republican leadership found their spine…at least rhetorically.

But since 2011, when Republicans regained control of the House of Representatives, Republican leadership had some teeth to act on those words, they seem to have turned vegetarian.

Thankfully, with that new Congressional class of 2011, there came new members of Congress who refused to check their spine at the beltway. These members aren’t interested in the “go along to get along” t-shirt sloganeering that permeates D.C.’s “now that I’ve been elected I must do everything I can to get reelected” permanent political class and are willing to risk everything to do what’s right.

One of them, Utah Senator Mike Lee, has never been a “go along to get along” guy. Never elected to anything before winning a bid for the Senate in 2010, Lee came to Washington without baggage. He had no long-standing relationships with lobbyists or fundraisers, no chits to repay. He was just a man who’d had enough.

After defeating an incumbent Republican in a primary, his election was pretty well assured as a Republican in Utah. That freed Lee from glad-handing and promise making during a contentious general election and allows him now to stand on that all too rare commodity on Washington—principle.

The federal government hasn’t passed a new budget in more than three years. In the absence of a budget, it has been operating on what is called a “continuing resolution,” occasional votes to keep funding government on a temporary basis, usually months at a time.

Republican leadership could use this to demand much needed reforms, spending cuts and/or any number of important changes in the way the federal government does what it does. But the extent to which they’ve used this, the most powerful arrow in their quiver, has been limited and embarrassingly ineffective. Lee has had enough.

Taking to the floor if the Senate Wednesday, Lee laid out a plan to block implementation of all of Obamacare. Just as importantly, he laid out a moral argument for doing so.

Seizing on President Obama’s arbitrary ignoring of parts of its own law, he said:

“We knew Obamacare would be unaffordable. But now we know it’s also going to be unfair. It is fundamentally unfair for President Obama to exempt businesses from the onerous burdens of his law, while forcing American families and individuals into Obamacare’s unsound and unstable system. It is unfair to protect the bottom lines of Big Business, while making hardworking Americans pay the price through higher premiums, stiff penalties, cut-backs in their hours, and job loss. It’s unfair to give businesses more time to figure out complex rules and regulations but force everyone else to figure out equally complex mandates and requirements. This administration has chosen to put its own political preferences and the interests of various government cronies ahead of the American people.”

His use of the word “fair” is important because it is reclaiming a favorite of Democrats, one they use to justify nearly every intrusive, expensive and unconstitutional action they’ve taken. But Lee wasn’t done.

“Republicans in Congress must now stand up for the individuals and families who do not have the money, lobbyists, and connections to get this administration’s attention,” he continued. “And we should do so using one of the few constitutional powers Congress still guards—its power of the purse. As long as President Obama selectively enforces Obamacare, no annual appropriations bill or continuing resolution should fund further implementation of the law.

“In other words, if the president won’t follow it, the American people shouldn’t fund it.”

In that last line, Senator Lee unleashed what should become the Republican mantra from this day forward.

In the absence of elected Republican Congressional leadership action, Lee isn’t waiting for someone to act, he’s ready to be that someone.

On my radio show Friday, Senator Lee said there is a “growing appetite” for blocking all funding for Obamacare implementation, thereby stopping it in its tracks, among Republicans in Congress. He said unequivocally that he will not vote for a continuing resolution that contains any money for implementing Obamacare and will “utilize every procedural mechanism at (his) disposal” to block any money for it. He has “13 or 14 Senate Republicans” willing to join him and expects that number to grow steadily. There’s also a similar movement starting in the House.

While it’s sad that only “13 or 14” Republican Senators are on board so far, there is still time before the next vote on a continuing resolution. But, as Lee told me, this will be the last continuing resolution vote, the last chance to stop it, before it becomes law and that train wreck happens. (Listen to the whole interview here.)

If Republicans had leadership in leadership positions in Congress, this would have already happened. It’s the biggest leverage Republicans have and leadership has never used it, never really threatened it. Senator Mike Lee is not only threatening it, he’s promised to do all he can make it happen. Hopefully “leadership” will recognize real leadership when they see it and, for once, follow its example.