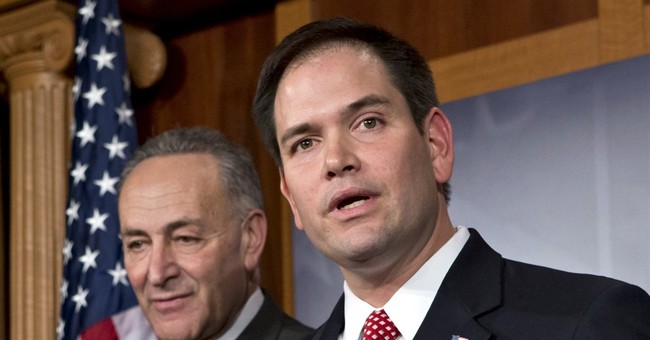 No one would deny our immigration system is not working. Legally immigrating takes too long, we a limit on the number of high-skilled, highly educated immigrants we allow in that is too low to meet demand and we have millions of people in the country illegally, either having walked across a porous border or overstayed their visas. How to address this broken system will be the political issue of the year.

U.S. Sen. Marco Rubio, R-Fla., has become the face of the push for reform. He wrote an op-ed in this week’s Wall Street Journal inviting public input on the issue. Here are mine.

Why does immigration reform have to be “comprehensive?” Can’t we just fix the aspects of our broken system everyone agrees on and debate the rest later?

The need for an increase in the number of high-skilled H1B visas is a simple fix that could be done tomorrow. This would help keep high paying, hi-tech jobs in this country and may eventually lead to the return of some that have been outsourced. That’s an easy win.

That our current system for legal immigration is too slow and out of date is beyond argument. Reforming and streamlining it would be another tap-in putt that could be done quickly and easily.

Border security should be another no-brainer. Maintaining our sovereignty should be beyond partisan dispute. Sadly, it’s not.

The insistence by you and your fellow “Gang of 8” members that all of the points everyone agrees on will get a vote only if a “pathway to citizenship” is created for the illegal aliens already here is where you lose me. Why, to pass reforms that will make our system stronger, do we have to include something so unpopular and fundamentally unfair?

I realize you and your fellow reformers don’t like the term “illegal alien,” but I don’t care. It’s accurate and truthful. Liberals play word games; that you would too is disturbing. Words have meaning; that you and so many of your fellow “reformers” would play this game, their game, makes me not trust any of you.

I know you say your plan would be a long pathway to citizenship. But why must it lead there at all? Illegal immigrants broke the law, knowingly and willingly. Rewarding them with citizenship flouts everything we know and believe about the rule of law.

That they came here only to find a better life for their families is irrelevant. If that is justification for awarding the greatest gift this nation can bestow on someone, what does it say about those who wait to come legally. Do they care less about their families because they did things right and didn’t crash the border?

The “Gang of 8” also has argued waiting 10-15 years for citizenship is a “punishment” and not permission to cut in the legal immigration line. But that’s simply not true. By virtue of their being here they have cuts. They will have years of work experience those who follow the law will not have. With citizenship an eventuality, those who’ve broken the law will, even if they obtain it later, be ahead of those who didn’t. That, by any measure, is unfair.

Additionally, and I want to put this a delicately as possible … We simply do not believe politicians when it comes to something so fundamentally important, regardless of party. We’ve heard it all before.

Why would we believe government would enforce immigration laws in the future? The president has shown no willingness to enforce them; nor has the attorney general. Why should we believe the next occupants will?

And, perhaps more disturbing, I see nothing in your legislation about sanctuary cities and states. The federal government, even when willing, can do only so much enforcement on its own. It can’t even do that if governors and mayors refuse to play their legal role. And they won’t if there are no consequences for refusing to.

Why don’t we cut all federal money for any state or city that refuses to turn over those it arrests to federal authorities for deportation? Why not make it a felony for state and local officials to refuse to comply? This way, no matter what, a criminal case would remain an option.

But the biggest suggestion I can offer is this – no citizenship at all for those here illegally. We cannot reward illegal activity with the greatest gift our nation has to offer.

I understand you want to “bring people out of the shadows,” even though they willingly moved there on their own. But that does not have to lead to citizenship. If illegal aliens want citizenship they can go home and get in line like everyone else waiting to come here legally. That would prove not only that they want it (which is in dispute), but that they’re willing to earn it.

But I understand the need to do something for those here, even if just as a trade to get common sense reforms done. So I suggest this: a new card. Call it a Purple Card.

Offer every illegal alien the opportunity to get right with the law by coming forward, going through a background check and, if they pass, getting a Purple Card that allows them to stay and work in this country legally for five years. They have to pay taxes, and it can be renewed. But it can never end in citizenship. Their children born here are treated like children of diplomats and do not get citizenship either. They get no Social Security, Medicare or Medicaid, but they have to pay those taxes – that is their penance for breaking our law.

They do not get welfare ever, but we will educate their children. They must prove every six months they’ve been employed at least four of the previous six months at a wage that requires them to pay taxes. If they fall under this threshold, they are on notice – do it once more and they are deported. Basically contribute or leave.

If that sounds harsh, it’s only because it is and should be. If the legal path to a Green Card is streamlined and more people are able to come here legally and quickly, this will encourage those who actually want to eventually become citizens to go through the legal process in their home country.

The Purple Card should be offered once, for one year after passage only and only to those who can prove they’ve been here at least five years. Those who miss that window and refuse to come forward and get right with the law should be subject to immediate deportation. If we offer this and people don’t take advantage, there should be serious consequences.

Senator, I’ve heard you and others try to sell your proposal, and I simply don’t believe you. We’ve been down this road before and were promised then we wouldn’t be back…yet here we are.

Government doesn’t solve problems, it simply postpones them. For example, you’ve claimed English proficiency will be a requirement under your plan. This doesn’t jibe with reality. We have legal immigrants who’ve been in this country for decades who can’t communicate in English, and any attempt to make English our official language is met with cries of racism. How much of a chance does your proposal actually have of being enforced?

Senator Rubio, our immigration system needs reform. Adding a poison pill to please extremists who see a future potential voting pool or dues-paying union members is not only not in our nation’s best interest, it’s not in the best interest of those immigrants you seek to help.

Give them a chance to get right with the law, show them the pathway to the back of the line for citizenship and leave it up to them. Those who want it, who really want it, will do it. Those who don’t, who just want to work here a while and go home will be free to do that too. Nothing will be forced on anyone, but they will have to choose and to do some things that affirm that choice.

I have no doubt those who choose to go home and come back through an expedited legal path will make great citizens, and those who just choose to work and return home will be good guests. But American citizenship is not a participation ribbon to be offered to anyone for just showing up. It’s too precious and too important to be given out like a Cracker Jack toy.

I fear you’re on track to offer amendments to a fatally flawed bill and, when they fail, continue to support that bill under the guise of “I tired to improve it.” I’m sorry Senator, but this is one case where trying isn’t good enough. Your voice, your vote, controls many. Leadership is as much knowing when you’ve lost as it is knowing how to win. Your bill, as it is currently written, is a loss. Change it. Or walk away if you can’t.

I admire your sentiment, but I will never support your current plan. I urge you to consider the ideas I’ve put forth here and those offered by other, much smarter people than I.

Massive, long-term solutions by temporary occupants of political offices have a history of boomeranging back upon future occupants of those offices and generations of Americans. If you take us down that road, the support you currently enjoy will not be there when you’d like it to be in the future.