Who's Divisive -- the President or the Players?

Dennis Prager
|
Posted: Sep 26, 2017 12:01 AM
Share   Tweet
The opinions expressed by columnists are their own and do not necessarily represent the views of Townhall.com. 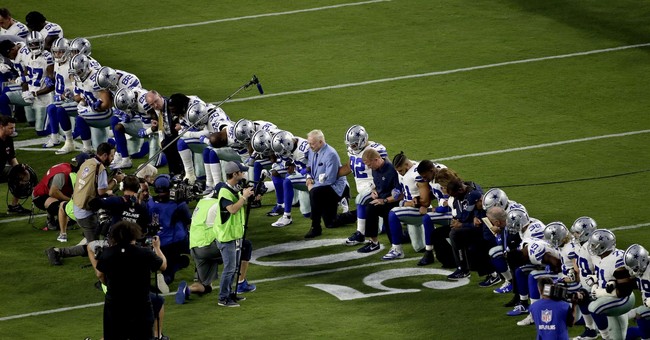 Because the left dominates the news media, the entertainment media and academia, Americans are swimming -- actually, drowning -- in an ocean of lies.

Here are a few examples:

Universities have a culture of rape.

There are more than two genders.

All cultures are morally and culturally equal.

Hurricanes Harvey and Irma were caused, or made more intense, by global warming.

Israel is the villain in the Middle East conflict.

Western civilization is a euphemism for "white supremacy."

The latest lie of the left is that, with regard to the conflict between the NFL and President Donald Trump, the president is the "divisive" party.

What other conclusion could any fair-minded person reach when people say with a straight face that Trump is the divisive party with regard to his conflict with players refusing to stand for the National Anthem?

Apparently, the question, "Who started it?" means nothing to the journalists, politicians and NFL players, coaches and owners who call the president "divisive."

So, before discussing Trump's reaction, our fellow Americans on the left need to answer some pretty simple questions: Has the behavior of those athletes has been divisive? Is kneeling while tens of thousands of people are standing divisive? Is publicly showing contempt for the American flag for which innumerable Americans risked their lives, were terribly injured, or died divisive?

The answers are so obvious that if someone denies that those actions are divisive, it inevitably raises another question:

Why would anyone deny it?

First, most people on the left think that they are centrists, or at most center-liberal. Therefore, they deem whatever they believe to be normative and deem whoever differs with them to be divisive and ultimately extremist.

This is true for every issue. Take same-sex marriage. Redefining marriage to include two people of the same sex was the most radical change in the history of the family -- far more radical than, say, banning polygamy. Yet, I have never read or heard a person who favored same-sex marriage acknowledge that this was a radical change, not to mention divisive. On the contrary, people on the left believe that all those who wanted to retain the only definition of marriage any society has ever had -- the union between the two sexes -- are divisive and extremist.

Likewise, in the eyes of the left -- the media, academia and the Democratic Party -- it is not professional athletes who have refused to stand for the national anthem who are divisive; it is the president and all others who condemn the players for doing so.

Was the president's rhetoric over the top? I believe some of it was -- specifically, calling the players "sons of b------." No politician, let alone the president of the United States, should use expletives publicly.

But if the president had sharply rebuked the players and the NFL using soaring rhetoric, the left would have similarly accused him of being divisive.

Imagine the president had begun his comments by saying something along these lines:

"To see professional athletes publicly dishonor the flag for which hundreds of thousands of Americans have died, the flag that millions of Americans have seen drape the coffin of their child, their spouse, their sibling, their parent, or other loved one is as morally repulsive as it un-American. Of course, these players have the right of free speech -- and so do I, and that is precisely the right I am exercising now."

Had he spoken that way, would the left not have characterized him as divisive?

There is a second reason the left portrays the president, not the players, as divisive. They agree with the players that the flag represents a systemically and socially racist country. How could they not? The left is the primary reason many Americans believe that America, the least racist multiracial country in history, is a racist country.

A third reason the left calls the president, not the players, "divisive" is that the left will say anything about those with whom it differs. The left sees language as a tool -- not with which to express truth but with which to defeat its enemies. From Stalin calling Trotsky a fascist to the American media calling Trump and his supporters "Nazis" and "white supremacists," lying about one's political enemies is as part of leftism as hydrogen and oxygen are of water.

And why have non-leftist NFL coaches and owners also called the president "divisive?" Because they if they told the truth -- that the players are the divisive party here -- they would have no team.

So, then, if you agree with the players, say so. But have the honesty to acknowledge that it is they -- the first players in American sports history to refuse to stand during the national anthem -- that are the divisive ones. Honesty feels almost as good as fighting conservatives. Try it.

Dennis Prager's latest book, "The Ten Commandments: Still the Best Moral Code," was published by Regnery. He is a nationally syndicated radio show host and creator of PragerUniversity.com.